Menswear is full of archetypes; its wearers are akin to Mr Benn. Every day, we assume different identities through clothes that are interwoven with history and symbolism: the soldier, the sailor, the personal trainer, as the nursery rhyme didn’t go.

Commentators periodically take the industry to task – not always undeservedly – for appropriating the uniforms of professions, especially working-class ones. But it’s not always about fashion so much as it is function. After all, it’s only logical that clothes made for performing tough jobs might become popular outside of their original context. How, though, we arrived at the illogicality of dry-clean-only cashmere ‘fisherman’s jumpers’, we’re not quite sure.

Whether you want to change your occupation or just your clothes, these are five real-life jobs that fashion has stolen from the most, plus what you should take – or leave.

From the trench coat to the field jacket, very few of the items hanging in your wardrobe haven’t come from military uniform. That includes the T-shirt (a standard-issue undergarment for the US and British navies circa 1913) and the chino (brought back from the Philippines by GIs).

Even the suit is discharged from the armed forces. Eighteenth-century swag lord Beau Brummell, a veteran of the Tenth Royal Hussars, mixed his cavalry duds with his civvies, and – with war in fashion over the last few centuries – many tailors honed their craft on uniforms, which they then applied to their other customers. Add to that the fact that when clothing is produced for conflicts in vast quantities, there’s the upshot of cheap, widely available ‘surplus’.

Perhaps the principal reason for the popularity of military clothing, though, is that it’s well-made and supremely functional. And because of its martial connotations, strategic deployment of camouflage or just the colour khaki can give any garment a certain toughness – even if the only time you ‘served’ was your summer holiday bar job.

Just be sure to follow orders: one piece is safe, two is risky (excepting less obvious ones like a nato strap watch) and three is fancy dress. You’re nodding to the military, not doing a re-enactment. Make-believe it may be, but the urban woodsman trend (AKA the ‘lumbersexual’) was rooted in a desire for authenticity – one that sprung up thanks to independent menswear stores championing solid, made-in-America products like Pendleton shirts and Red Wing boots.

As many axe-sharp commentators have observed since, this swagger-lumberjacking also speaks to a wider perceived crisis in masculinity. (Insert your own ‘wood’ jokes here.) When your craft consists of tapping away at a keyboard, the notion of making actual stuff with your hands – without the aid of a whimsically illustrated instruction manual – becomes appealing. Yes, lumberjacks mainly chop stuff down, but the point still stands.

As with the soldier, the aim here is to borrow some of the lumberjack’s rugged masculinity, consciously or otherwise. And there’s nothing wrong with buying a plaid work shirt, even if your work is more white-collar than blue. Or with growing facial hair for that matter.

The cut-off point is when it becomes costume, or worse, a full-on lifestyle that automatically rejects anything that isn’t exactly like how they did it in the old days. Try swapping your MacBook for a typewriter, and let us know how you get on. By post. Where did the athleisure trend – i.e. looking like you’re going to the gym, even if you’re not – spring up plyometrically from? More importantly, who came up with the name, and can we go back in time to stop them?

Well, interest in health and fitness has swollen more massively than an inflatable Arnie in recent years. It used to be that just working out was enough to define you literally and metaphorically. But now that everybody exercises, it’s about where, how and in what. Hence the flood of scenester sweatboxes and eateries serving clean-and-lean Instagram fodder.

Then there’s the practicality aspect. Sportswear (think tracksuits, hoodies and joggers) is designed for moving in, making it comfortable even if it’s a rest day. It’s an arena that incorporates the latest advances in fabric technology. And it’s a movement away from the lumberjack right before it, a kettlebell-like swing of the fashion pendulum from traditional to modern.

But there are some elements that athleisure and lumbersexuality have in common: namely, a strong suggestion of physical capability, whether it’s performing cable woodchoppers or chopping actual wood. You’re a manly man, even if you’re wearing compression tights. In addition to the soldier, the sailor deserves his own entry on account of the sheer quantity of naval garments that have cemented themselves into the wardrobes of us landlubbers.

There’s the pea coat, which was double-breasted to provide warmth and protection from rigging. There’s the duffle coat, with toggles designed for doing up with gloved hands on deck. And of course there’s the Breton top, with its graphic stripes that supposedly made sailors who fell overboard easier to spot. That’s all before you get into non-military nautical items like boat shoes.

While they may elicit a “Hello, sailor” or “Ahoy” from unenlightened types, these pieces are, like real sailors, extremely hardy. They’re also practical. And furthermore, they hark back to an authentic, rum-sinking, mum-tattooing masculinity.

You could even push the boat out with a pea coat, a Breton top and ‘watch cap’ beanie without looking too preposterous. But one too many pieces can tip you over. And steer well clear of gold or brass buttons, which should get in the sea harder than Leonardo DiCaprio at the end of Titanic. The sailor’s civilian cousin, the fisherman has been fingered by some birds-eyed pundits to take over from the lumberjack as the fashion tides change.

So hot right now they may be, but it should come as no surprise that real-life fishermen dress primarily for function – i.e. staying warm and dry – rather than form. Which is precisely why their wardrobes are being trawled by hipsters looking to ride the next wave.

There’s been a net increase in recent seasons in ‘fisherman’ jumpers with Fair Isle or Aran patterns. Although unlike authentic Aran knits – which are handmade by Irish fishermen’s wives from unwashed wool boasting natural, waterproof lanolin (and a characteristic sheep smell) – they’re probably a poly-cotton blend produced in the Far East.

The deluge of brightly coloured slicker-style waterproofs can also be traced – via Scandinavia – to our fishermen friends. Again, while the trend might seem laughable on the surface, it’s resolutely practical (yes even the sandals designed to easily let water out). Ultimately, what looks stupid is not dressing up as a fisherman, but buying expensive, rarefied versions of stuff that’s meant to be utilitarian. 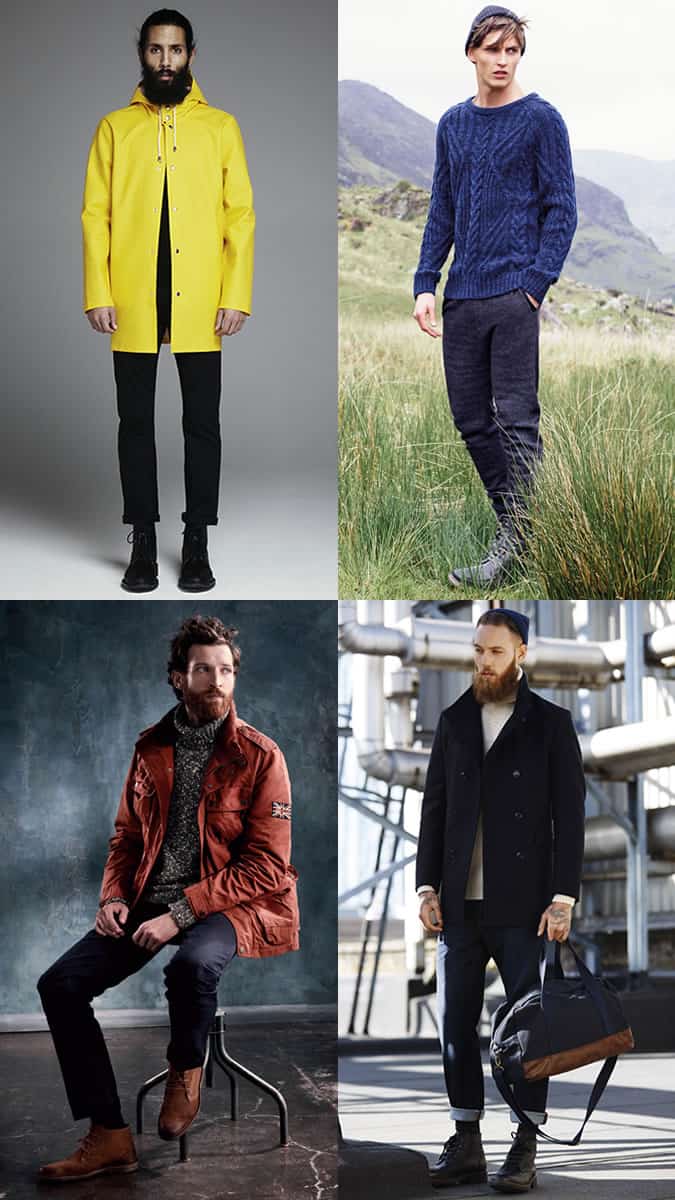