Chinos. Hardly the life and soul of a man’s wardrobe, but integral nonetheless. But then, isn’t it precisely the former military staple’s inherent boringness that makes them so great anyway?

Sure, a pair of slashed-knee skinny jeans may give a little more edge to your image and let everyone know in no uncertain terms that you follow the trends, but they won’t be up to much languishing on your bedroom floor when you can’t find anything other than a band tee to pair them with.

Chinos, on the other hand, are the wardrobe’s reliable all-rounder. They are menswear’s multipurpose tool, the box-to-box midfielder of bottoms, the, well, you get the picture. Chinos are the one style of trouser that is as good a fit with a T-shirt and sneakers as a shirt, blazer and brogues. Which means, if you happen on the perfectly fitting pair, you should snap up several pairs in different colours. Specifically, these ones.

The OG. Were it not for neutral-coloured chinos, most of us would still be trying to pass off blue jeans as a match for structured suit jackets. Not only that, but we wouldn’t have half the frankly glorious pictures of Steve McQueen to show us how style’s done, either.

As a general rule, be it on shoes or suits, the lighter the colour, the less formal the piece. As such, beige chinos are ideal for casual settings – like a day in the park or happy hour drinks. Pair yours with a shirt that’s navy blue, burgundy or dark grey; as these dark hues will help balance the look. Or, for a modern preppy look, throw them on with an Oxford shirt and sweatshirt, and finish with a pair of casual sneakers for a failsafe outfit. Not just for men with anchor tattoos, navy chinos can be worn in plenty more ways than paired with a Breton top, beanie and a bottle of Captain Morgan. Indeed, a pair of chinos in this colour is one of the smartest additions you can make to your fleet of smart-casual pieces.

The epitome of ease-of-wear and versatility, wear navy chinos with a simple white T-shirt and sneakers for the ultimate throw-on-and-go outfit. Equally, you can lean on the fact they look like one half of your best suit and dress them up with a shirt, tie and cardigan for a look that flies in the office and at after-work drinks with a few alterations. An army-inspired staple, olive green or khaki chinos lend any outfit an air of authority (even if the only conflict you’ll be engaging in is over the office air-con). They’re also one of the easiest routes into wearing more colour, without having to tread too far from your sartorial safe zone.

They might appear a little more tricky to work with than more classic shades, but that doesn’t mean khaki chinos should be given their marching orders. Though they work particularly well with basic pieces like T-shirts in white and shades of grey, the trousers can also sit handsomely alongside neutral and camel tones, or upgraded from civilian life with a smarter top half. Now that’s versatility that should get your attention. If olive green chinos are standard issue for the battlefield, grey chinos are the best bet for the boardroom. Suitable for every skin tone, this colour is – and we mean this in the best way possible – boring enough to be the perfect base on which to build your workweek looks, but also plays well with your off-duty wardrobe.

Grey chinos can be worn with a wide range of colours and styles. Because of their neutral hue, you can pretty much pair them with anything. Dress yours up with a black shirt, play it casual with a light blue Oxford button-down, or add some denim to your pair, in the form of a stonewash jacket. Heck, do it all. Like grey chinos, a pair in black provides the perfect blank canvas for building a variety of looks both smart and casual. Plus, they won’t show up stains as easily, which is handy if bathroom sink splash-back has crotch-soaked its way to becoming your sworn enemy.

With the chameleon-like ability to imitate both your tailored trousers and your jeans, wear black chinos for work with a sharp shirt and deconstructed blazer to stand out from the crowd. Then, if you’re going out, put on your favourite T-shirt and overshirt, and you’re good to go. Pastel chinos are to a man’s legs what an affair is to his marriage: sure to liven things up, but not without its, admittedly, catastrophic consequences. Unless you’re a menswear maverick (in which case, more power to ya), the main thing with these summer staples isn’t so much to worry about the exact shade as to keep everything else you’re wearing it with as pared-back as possible.

Though they might not scream for attention as much as neon shades, when wearing pastel chinos it’s important to remember that they’re the star of the show. The colour of your top should complement the bottom, without being too matchy – basic shades of black, off-white and grey are hard to go wrong with. Avoid using the same shade twice, and for your shoes, a pair as clean (in every sense) as possible will do the trick. 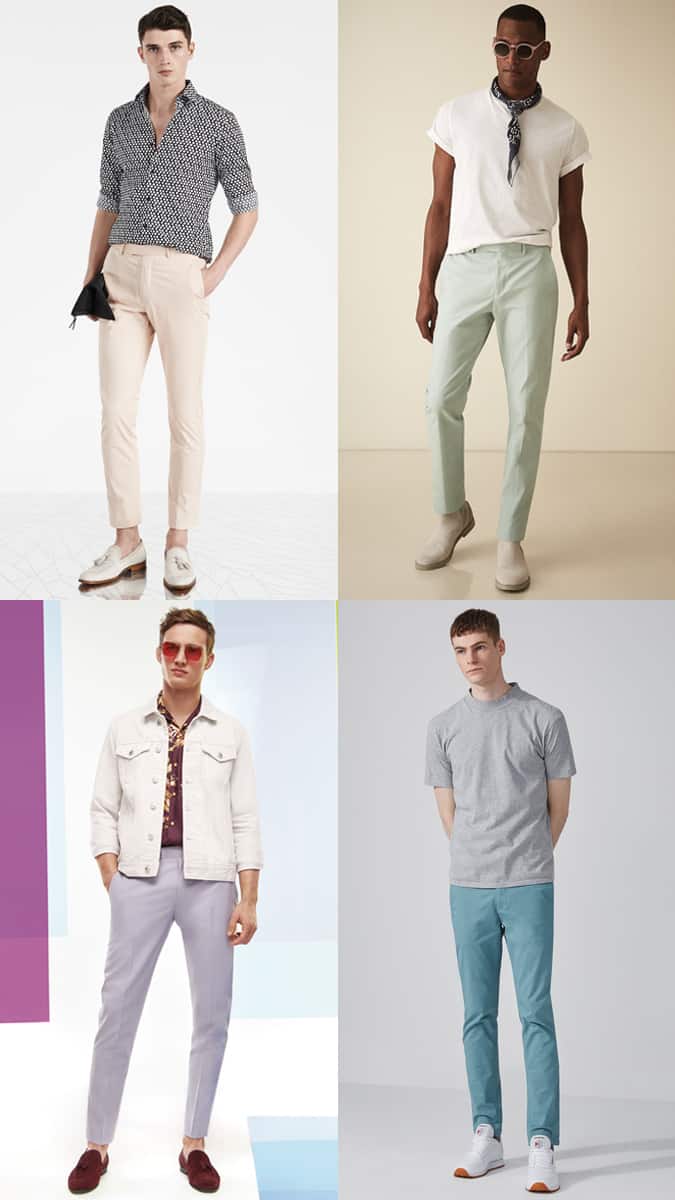 Pandemic production: when design is a matter of life or death