Like a lot of style classics, the modest check shirt isn’t going to set the universe alight any time soon. But in a world of frivolous floral shirts and cunning Cuban collars, the checked shirt is the pragmatic partner we all need, a steady Eddie that’ll never let you down (as long as you style them correctly).

You’re bound to have a couple in your wardrobe already and not to worry if, curiously, you don’t. Their reputation as a style staple, free from the chopping and changing of fashion seasons and trends, means there will always be options available in stores come summer or winter.

The first known variant of the check shirt came in 1850 with the two-tone buffalo check shirt from American heritage brand Woolrich. It was influenced by a tartan pattern that had belonged to the clan of famed Scottish outlaw Rob Roy McGregor after plaid patterns had been banned in British for large parts of the 17th century.

And while those Georgian rulers succumbed to their mortality, the check shirt has proved immortal, buoyed by its reputation as a fashion icon sported by every style icon from John Wayne to Travis Scott and it’s as important to grunge fashion and preppy style as it is to lumbersexual hipsters.

“The check shirt is a perennial,” says Beth Pettet, partner and head of menswear buying at John Lewis. “It’s an item that is equally at home with a casual pair of jeans or shorts as it is a smarter chino, bridging the gap of that tricky casual into smart vibe that men are increasingly having to navigate when the rules are no longer clear cut.

“In short, a bit of a safety blanket for the days when you haven’t got time to think too much about what you’re wearing but still need to look stylish for the day ahead.” “Clean lines, unfussy designs and simple colours will ensure that your purchase doesn’t date,” says Pettet. “Fresh blues, indigos, and ecrus always look modern but warmer tones are great for the autumn and are increasingly relevant.”

To modernise this age-old style, Pettet recommends looking to different textures and fabrics to add an extra element to your ‘fit. “From linen-cotton mixes to seersucker in the summer months through to brushed cottons and flannels in the autumn, picking a fabric with some substance to it will give some interest and new life to this look and stop the checks feeling too flat.”

Another thing to remember when you’re wearing checks: dress for your body type. Larger checks will make you look broader – a useful ally for tall, slim guys – while micro checks can be useful for those with a slighter stature.

These are the key styles to look for.

The OG of the checked shirt world, the buffalo check carries great transformative power, effectively turning the most innocent of altar boys into a sly bad boy in one fell swoop. It’s all down to its rugged workwear origins and the long line of badass fashion types who’ve carried off the look down the years from Kurt Cobain through to David Beckham.

A two- or three-coloured striped fabric with large squares of equal size, the buffalo check is bold, simple and effective. Red and black is classic, even if it is still shaking off connotations of bearded baristas from 2012. Whatever colour you opt for, it’s not one for the buttoned-up office, but is far better suited to the great outdoors (or, failing that, a trendy co-working space).

Either tap into the rocker vibes on this one or channel your inner lumberjack. Both looks are similar, resting heavy on the buffalo check but with the former, you’ll want to pair with some skinny black denim while the latter look requires a wider, mid-wash pair of jeans. Taking its name from the old name of Chennai, a city in southern India, the Madras shirt, like plaid, technically refers to the name of the fabric, not the check. It’s made from a very short cotton fibre which makes it extremely lightweight but also results in little bumps forming during the manufacturing process given it a unique texture similar to seersucker. Breezy in style and fabrication.

It became a favourite of the preppy American elite in the 1960s, being seen as an exotic status symbol by those who could afford the expensive-to-ship garment and is still a somewhat spiffier alternative to the more sturdier tartan plaid. Madras check often come in wilder colours than other types of shirt, especially in summer.

Lean preppy, to capture some of this shirt’s midcentury kudos. We’re talking slim chinos with the hems rolled and canvas sneakers below.

If it’s a long sleeve option, roll up the sleeves so the look doesn’t look stiff and throw on a light blazer, but be careful to not bring too many conflicting shades into the look. The neatest check on the checkerboard, gingham is usually cast in white and different shades of red or blue. Instead of being woven into a plaid fabric it’s more likely to be seen on a medium-weight cotton yarn or linen in summer. Hijacked as a style signature by the mods and British brand Ben Sherman in the 1960s, it was normally worn in a mod uniform tucked into jeans with braces over the top, although preppy interpretations also work.

The mods had the right idea trying to smarten up this tidy, smart-casual pattern. Wear sans accessories, so your outfit doesn’t descend into costume, and tucked into some slim mid-wash denim with a black Harrington jacket over the top in autumn and winter. It can look rather slick indeed tucked under a navy suit. From the hundreds of Scottish clans who possess their own tartan check to the numerous brands that have taken on their own tartan signatures (Vivienne Westwood, Burberry, Aquascutum, Barbour – we could go on and on), tartan check has become a byword for fashion luxury. It’s largely down to the distinctiveness of its patterns, which will make an impact on shirting just as much as they would on a kilt.

If you consider yourself a punk, a red tartan is practically standard issue. For everyone else, darker shades work best, and consider an undershirt or overcoat (depending on the weather) to break up the complex pattern. “Team with some well-loved or lived-in sneakers and lighter, looser denim rather than always pairing it back with boots to make it feel fresh,” says Pettet. 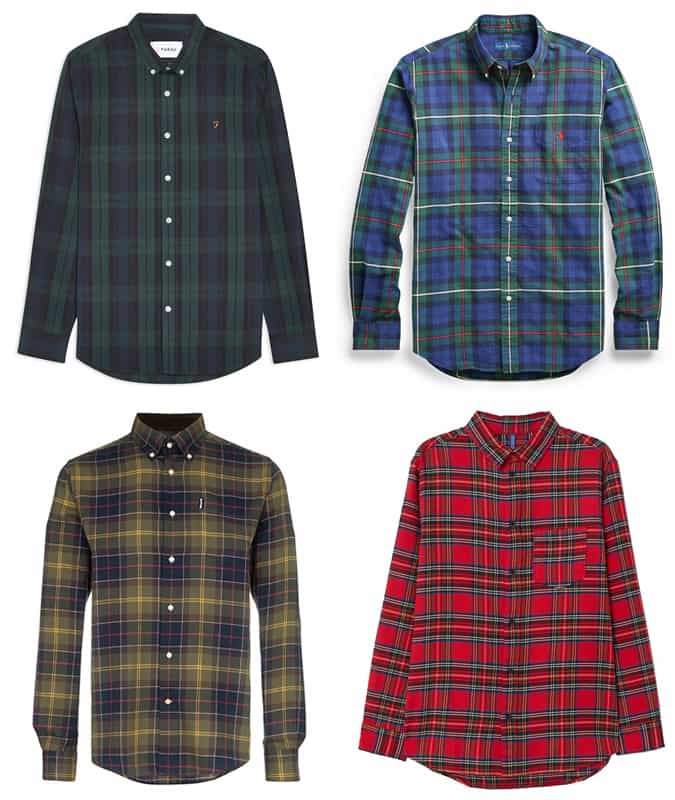 Big and bold, nobody puts the windowpane check in the corner. It’s distinguished by its large rectangular outlines which sit smugly over a different coloured background. The contrasting squares will stand out, which makes it a source of attention – and consequently, it’s quite difficult to wear.

If you have a bit of a belly, for example, you might want to look for a more subtle, light windowpane check in a tonally matching shade so the eye isn’t drawn to an area you might not want eyes drawn to.

You don’t fight fire with fire, and as such it’s better to play it safe with the rest of your outfit if you’re wearing windowpane. Try simple black trousers with the shirt tucked in or a bulky navy peacoat that allows a little window of show-stopping check to peek through. Starting life as a pattern on 18th-century horse blankets (the name comes from an historic British horse auctioneer), the tattersall check is created by combining a horizontal stripe with slim, vertical stripes. The result is a grid of little squares across your shirt. Its origins in horse racing have made it a firm part of British outerwear and a look usually reserved for our modern version of what you’d call landed gentry (posh people, basically).

Keep the tattersall check with its British outerwear family and you can’t go wrong. Waxed Barbour jackets and Wellington boots are where this style looks most comfortable, but you may also wish to try it slipped under a slim-fitting black suit for some fresh high-low styling. More usually seen on outerwear pieces like tailoring and winter overcoats, the Prince of Wales check is a signature of dandy British fashion. Named after noted fashion icon the Duke of Windsor when he was known as the Prince of Wales, its characterised by large squares teaming up with a black or brown-and-white check with a vein of contrasting blue, pink, red or green overcheck.

Sounds complicated but the result is one of the easiest to wear checks on this list and an instant passport to menswear’s first class lounge.

This is a stand-up check that deserves a stand-up outfit to sit alongside it. Use as a subtle variation in your office shirt rotation sitting alongside a plain navy or black suit. Grey suits tend to have a check to them so its best to steer clear, so the affair doesn’t get too check heavy. How to Style a Maxi Skirt This Fall