Yes, berets. Stand to attention, arty-intellectual, comedy Frenchman who’s just missing a baguette, berets. But before you go anywhere, hear us out.

There’s been a veritable array of berets over the past few seasons. Designers from high-fashion establishment Prada to streetwear provocateur Gosha Rubchinsky, Louis Vuitton to Grace Wales Bonner via Missoni and Alexander McQueen have all proposed the polarising headgear du jour; on the high street, Cos and ASOS have both nodded to it. So reluctantly, incredulously, we at FashionBeans find ourselves writing a guide to wearing them.

Arguing that “they fail to fulfil the most basic function of a hat – namely, to keep one’s head warm,” The Guardian’s fashion maven Hadley Freeman gave her unambiguous verdict back in 2012: “A beret on a man is ridiculous.” Berets may put some in mind of late seventies sitcom Citizen Smith, with Robert Lindsay playing a young Marxist who styles himself as ‘the Che Guevara of Tooting’. But berets can evoke more serious activism, from the actual Che Guevara to the leather-jacketed Black Panthers – the latter feeling particularly timely, what with campaigning filmmaker Spike Lee collecting his Oscar and BAFTA for BlacKkKlansman in berets with a purple suit (a Prince tribute) and tuxedo respectively.

The unswerving Lee’s been wearing berets for years, of course, but their wider popularity has picked up of late. Grime and garms don Skepta rocked a Loewe beret on the front of a fashion magazine, while Hollywood A-Lister Michael B Jordan – AKA Killmonger in Marvel blockbuster Black Panther – has cover-starred in the Basque style by esteemed London hatters Lock & Co. “Berets have become more and more popular,” confirms Ben Dalrymple, managing director of Lock & Co, which holds royal warrants from the Prince of Wales and Duke of Edinburgh. “They are timeless, ageless and classless. Traditionally berets were a modest hat, but now they are seen paired with great outfits, and worn by some of the world’s most iconic and respected stars of fashion, music and film.”

The hitherto humble beret was typically made from felt, which is cheap, easy to produce (basically by squishing wet wool together until it bonds, which shepherds did by sticking tufts in their shoes) and weather-proof. Varieties of felt hats similar to berets date as far back as the Bronze Age, but headgear more readily recognisable as the style was adopted by farmers in the 15th century in southern France, from where it crossed the border into Basque country.

Berets, specifically red ones, became politically and militaristically charged during Spain’s Carlist wars of succession in the early 19th century; they’re now standard issue in militaries around the world, with green ones badges of honour for elites such as the British Army’s Royal Marine Commandos and the US Army’s Special Forces. So think carefully before asking, “Do you ‘ave any onionz?” Affordable and surprisingly practical, berets were also adopted by another class of people who often didn’t have a lot of money and sometimes worked outside: artists. Which perhaps partly explains why berets became chic in turn-of-the-20th-century Paris. (The rich love to borrow or buy credibility from creatives, as the lyrics of Pulp’s Common People testify.)

To what though can this current beret-surgence be attributed? Perhaps the nineties revival which has seen the return of brands like Kangol, winding the clock back two decades like the CGI’d Samuel L in Captain Marvel. Or perhaps the constant striving for a like-worthy swerve in an arms race of personal expression-slash-competition for likes and followers. Or perhaps our beyond-irony, it-was-all-a-meme culture that seen attempts to rehabilitate, among other things, dad style, bootcut jeans and square-toed shoes.

Whatever the reason, berets are ‘a thing’, and deal with it we must.

How To Wear A Beret

If you’re even thinking about trying to pull off a beret, then you’re probably the kind of freethinking fashion revolutionary who doesn’t want or need to follow guidance, much less ‘rules’. But we’ll give you some anyway.

“Traditionally, a beret will be worn level on the head, and pulled down to the right-hand side to about 1-2cm above the eyebrow,” explains Lock & Co’s Dalrymple. “However, it’s perhaps one of the more versatile hats to shape and style to preference. Casually it can be worn more at an angle, or reclined onto the back of the head, or as a statement piece it can be worn more upright and proud.”

Speaking of “statement”, your beret-wearing artist’s palette is by no means restricted to the conventional navy and black: “Now we’re seeing brighter, lighter colours – for example, white is in demand this season.” What To Wear With A Beret

Provided you’ve got the clout to wear a beret at all, then whatever you like. Gosha, Off-White and Stüssy have all deployed berets with the streetwear uniform of hoodies, track pants and trainers. It’s been suggested by some pundits that you should dial down the rest of your ‘fit to compensate for the statement-iness of the beret, which is only logical. But frankly, if you’re wearing a beret, then you’re way beyond such concerns.

For more of a Left Bank look, draw outfit inspiration from the autumn/winter 2017 show by YMC (a wearable, not-bonkers brand that has repeatedly advanced berets before they were ‘cool’ – ditto Margaret Howell): an overcoat or tweedily academic tailoring, chunky statement knit or Breton top and a long scarf, all in monochrome and just the right side of mime artist. Again, some commentators counsel against stripey tops because of the comedy Frenchman connotations, but if you’re going to wear a beret, then we say: lean in. Or bank left.

Finally, you could take direction from Spike Lee – or Jack Nicholson at the 1976 Oscars – and wear your beret with black tie. Or purple, in Lee’s case. Do the bright thing. 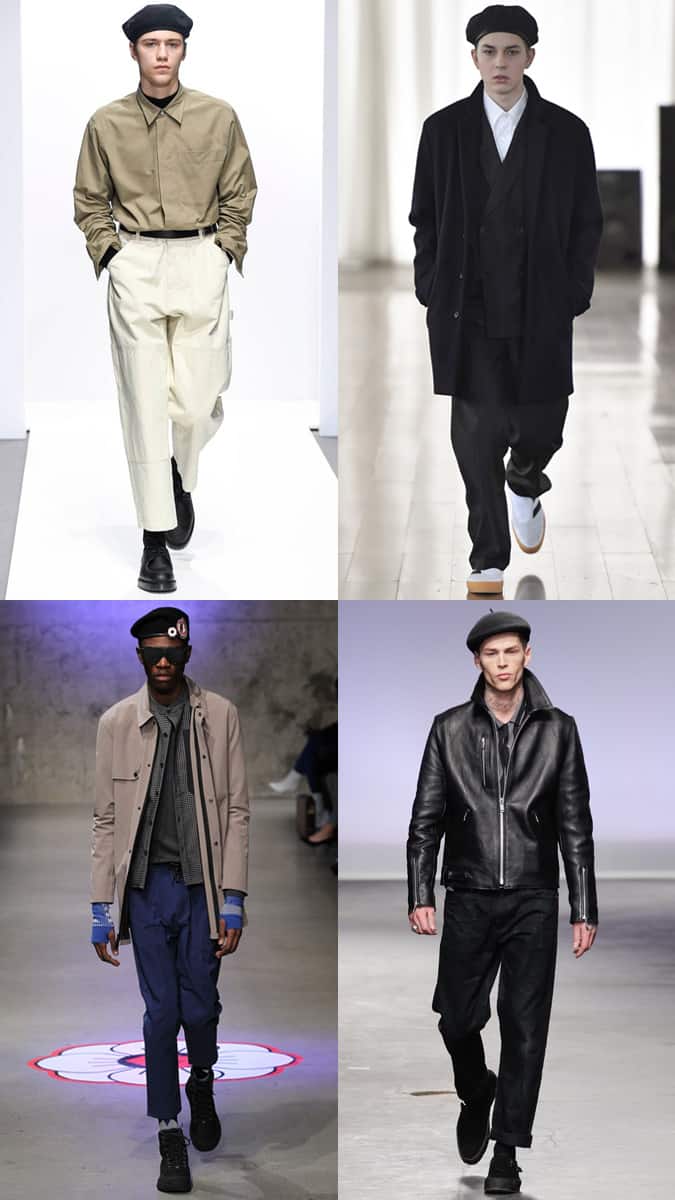 “A quality beret will retain its shape and size, even after a downpour,” says Dalrymple. Probably best to ascertain whether yours is a decent one before it’s irreparably water-damaged by a heavy shower and your money goes down the drain.

“Ideally it will be traditionally hand-crafted from refined felted wool and lined,” Dalrymple continues. “If the wool felt is too thin or flimsy, it won’t hold its structure or shape; too thick or stiff and it will perch rather than fit naturally.” Lock & Co also adds a leather trim for further reinforcement, which also helps you look more soldier than peasant or painter. How To Care For A Beret

The somewhat less practical prospect of a white beret brings us to the subject of cleaning – even if you’re not in the army, you’ll want to pass inspection.

“Steam from a household kettle and a hard-bristle hat brush will help remove dust and dirt,” says Dalrymple. “Brush the beret using short strokes, following the natural direction of the fibre. Wet hats should be dried using a clean, absorbent cloth or sponge, then left to dry naturally – never place them directly on a heat source such as a radiator.”

The Baby Tee Is Back—With a Twist