Skip to Content
Home / Fashion / As He Cut My Hair, I Wept 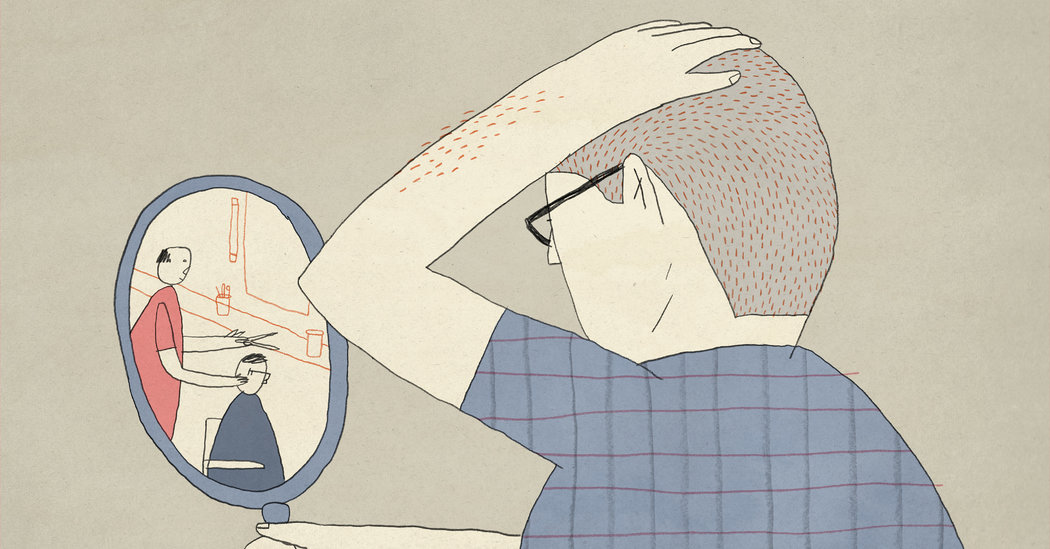 A few weeks ago, I gave myself a crew cut. I didn’t know how long it would be before I could visit a barber and figured I might as well do it myself.

I took my electric clippers into the backyard of our house on Martha’s Vineyard, where we live year-round. It didn’t take long, a few passes around my head as the hair piled up on the grass. Afterward, I gathered the clumps and placed them at the edge of the yard near the bird feeder as an offering of nesting material.

It felt good to rub my hand on my nubby scalp. As a boy I liked to get crew cuts during wrestling season; they made me feel tough and focused. My new crew cut helped me feel that way again, which is good, because on so many days during this pandemic I feel like I want to crawl under the bed and hide.

I am also sad about my new look.

Not because my 12-year-old daughter cried out in shock, telling me I looked old and bald. Not because my teenage son told me my ears were massive and that I looked like an elf. No, I felt bad because I had shaved off a special haircut, one I have enjoyed once a year, every year, for the last decade.

In February, before the pandemic, I traveled to Boston for a conference and also paid my annual visit to a fancy salon on Newbury Street, where I sat at Elie Ferzli’s station.

Elie and I have known each other for a decade but see each other just once a year, so in total we have spent less than an hour a day together for 10 days. We do not correspond in between, and yet I count him as a dear friend. I believe he feels the same way about me.

I met Elie when my wife, Cathlin, was undergoing treatment for breast cancer at Massachusetts General Hospital. She had begun chemotherapy and soon her hair would fall out. Her team at the hospital had sent us to a woman named Pat who owns a salon on Newbury Street that specializes in making wigs, both for cancer patients and the transgender community.

When we arrived that evening, Pat met us at the front desk and led us past the rows of busy stylists. As we made our way to the back, I was struck by how we were facing a life and death diagnosis while all these other people were seemingly enjoying normal lives of weekends and joy.

I cried often in those days, sometimes quietly, sniffling to myself, and other times explosively, the full force of what our lives had become catching me unaware like a sneeze. Sitting with Pat and Cathlin, talking about wigs and baldness, was one of the times I lost it. Excusing myself, I dashed from the room, planning to walk the streets until my tears had subsided.

But as I walked past the rows of beautiful people, I saw a man standing beside an empty chair. He smiled and motioned me to sit. Without thinking, I did.

We didn’t talk much. Elie cut and I wept. And he did not charge me.

A few weeks later, Cathlin’s hair fell out. We thought it would be gradual, giving us time to adapt, but cancer, we learned, is not so orderly. It is chaos of a different kind, filled with confusion and too much time to think about worst-case scenarios.

Cathlin is a minister, so of course her hair fell out on a Sunday morning just before church. A neighbor shaved her head to even out the clumps, and an hour later Cathlin preached a sermon about delivering herself into a fire of love in order to come out the other side, forever changed but somehow stronger.

I did a lot of push-ups in those days, outside in the dark of night. Something about gripping the cold earth with my hands felt comforting. Chemotherapy was followed by a double mastectomy and then months of radiation. And then, finally, a cancer-free diagnosis.

At first Cathlin returned to Boston twice a year for checkups and then once a year, which she continues to this day. The trips no longer fill us with dread, at least not the heavy type that turns a normally busy and loud family into a quiet one where even our children would press pause on their exuberance as they waited for their mother to return from Mass General with news. Now, so many years and checkups later, it is merely part of our routine.

On some level I envy Cathlin and her ability to stay in touch with the cancer team who became our friends and are also reminders of the positive side of those dark days. Being a caregiver to my wife and our children, who were so young then, gave me my first glimpse of becoming the man I had always hoped to be.

But while my wife gets to see her oncologist and the nursing staff, I have Elie. Each time I sit in his chair, we check in with each other, which for the first few years mostly meant Elie asking me how Cathlin was doing. Then one year, when I called for my annual appointment, I was told Elie would be out for several months. The receptionist couldn’t tell me why. It would be another year before he could tell me his story.

In June of that year, he learned he had multiple myeloma, a disease that enters the bloodstream and bone marrow. After chemotherapy and stem cell treatments, he had to protect his immune system by staying in isolation for four months, unable to walk the streets or even hug his wife or son.

He told me this the next year while I sat in his salon chair, looking at him in the mirror before me. He was healthy again, bent over my hair and moving about with ease. Around us, customers and their stylists carried on their own conversations, the hum of voices mixing with the sounds of scissors and blow dryers.

The years piled up, and as our children grew, Elie and I shifted from conversations about preschool to grammar school to high school. We grew beards and shaved them off. My hair began to thin, and I worried about going bald, less out of vanity than fear of missing my annual visit with Elie.

I brought Cathlin to meet him and then the children. When he met our daughter, whose nickname is Pickle, Elie held out his hand and said, “Nice to meet you, I’m Cucumber.”

In February, when I sat down in his chair, we started by checking on each other’s health. I told him Cathlin was doing great, but when I asked him if he was still fine, he said, “Well, let’s define fine.”

Elie told me his cancer had returned but the doctors were keeping it at bay with twice a week chemo.

I looked at him, incredulous. He seemed as energetic as ever. “How are you still working?” I said. “When Cathlin had chemo, she would lie in bed for days.”

“I don’t feel the effects,” he said. “Never have. After treatments, I go play volleyball.”

Elie kept talking and cutting that cold February day, telling me about the particulars of his disease, which would remain in his body until new drugs were discovered. He could only get one more bone marrow transplant, but the doctors were saving that heavy artillery for later. For now, it was chemo and volleyball, a bizarre combination, but one that worked for him.

“Enough about this,” he said. “Let’s make your hair smile.”

And we fell quiet, just the clipping of scissors as I watched him from my perch. Cathlin may have her oncology team, but I have Elie to remind me of those days, both the bad and the good. I remembered pushing my wife in a wheelchair through the hospital. She was bald and pale and weak as I led her to the elevator for surgery. People turned their heads and I could almost hear them thinking, “There goes someone in worse shape than me.”

Yet it was a golden time, too, filled with fear and uncertainty but also beauty, when trivialities evaporated, leaving only love behind.

After the pandemic hit, I called Elie for the first time in our long friendship. He reassured me that he was fine and able to still do his chemo treatments through a separate hospital entrance. We talked a little longer, and I told him about my self-administered, backyard crew cut.

“I bet you look handsome,” he said.

Gucci Starts a New Story with Its Epilogue Collection