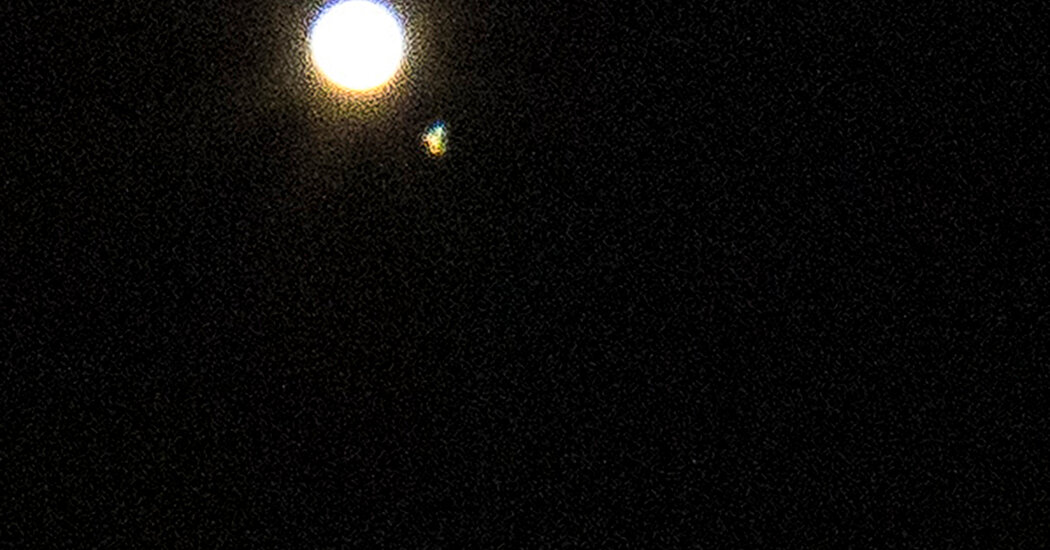 The last time Saturn and Jupiter, the largest planets in our solar system, orbited as closely as they will on Dec. 21 and were visible in the sky, the year was 1226.

Almost 800 years later, on Monday, these titanic orbs will once again appear in the heavens just one-tenth of a degree apart — about the thickness of a dime held at arm’s length, according to NASA.

Astrophiles of all stripes are excited, to say the least. Astronomers and other sky watchers could witness a once-in-a-lifetime event. Astrologers are heralding it as a time of rebirth. (The conjunction falls on the winter solstice.) And holiday aficionados are calling this bright conjunction, happening so close to Christmas Day, the “Christmas star.”

Basically, it’s going to be cool. Or as Renu Malhotra, a professor of planetary sciences at the University of Arizona, put it to The Times: “It’s a very romantic event to see these planets approaching each other.”

In medieval times, presumably, very few earthlings witnessing what might have looked like a near collision of celestial entities would have understood what was happening, in a technical sense. But it is almost guaranteed people were fascinated by it then too, said Jo Marchant, a science journalist and author of “The Human Cosmos: Civilization and the Stars.”

“Humans have had a really intimate relationship with the cosmos ever since the dawn of our species,” Ms. Marchant said. “We forget now living in polluted cities, but it would have been the most fantastic thing in the night sky.”

And while, today, humans have telescopes, satellite systems and all manner of stargazing apps to keep them up-to-date on space and the visible solar system, we have not lost our intrinsic curiosity about the night sky, Ms. Marchant said.

Some form of conjunction of Jupiter and Saturn happens about every 20 years. But “this one is particularly neat because they are getting very close in the sky,” said Henry Throop, an astronomer at NASA who has been watching the impending planetary convergence from his yard. (The planets inch closer every day.)

“They are not physically touching in space,” he said, adding, for those who need to be reassured that 2020 will not deliver another crushing blow: “Jupiter won’t crash into Saturn.”

Chani Nicholas, an astrologer who lives in Los Angeles, sees the moment more mystically. “This is the end of an era and the beginning of a new one,” she said.

“The winter solstice is a really great time to set an intention because symbolically you’re setting intention with the sun returning,” she said. “With the conjunction there is a sense of gravity that comes with that moment.”

Of Jupiter and Saturn, Ms. Nicholas said: “To have these two be so beautifully placed to be so bright and enchanting in the night sky feels very cosmically poetic.” She added: “After this year of restriction and confinement and devastation, there is this feeling of there is some kind of renewal.”

Now, astrology, as we’ve mentioned, is in no way scientific. But who isn’t in the mood to manifest some positive changes?

At the very least, “this is a great chance to go outside and see the sky,” Dr. Throop said.

“Go any place where you can see the sunset and a half-hour after it you will see Jupiter and Saturn 30 degrees up in the sky,” he said. “Jupiter will be brighter than Saturn because it’s closer to us.”

The planetary tryst will end almost as soon as it begins. Jupiter and Saturn will have more distance between them on Dec. 22.

Then, we’ll have to wait until the next great conjunction of this caliber, in 2080. So, go on and gape at the night sky like our ancestors did (albeit with a little more social distancing for safety).

Instagram Is My Job, and This Trend Is Taking Over My Feed