Skip to Content
Home / Fashion / Crop Circles Were Made by Supernatural Forces. Named Doug and Dave. 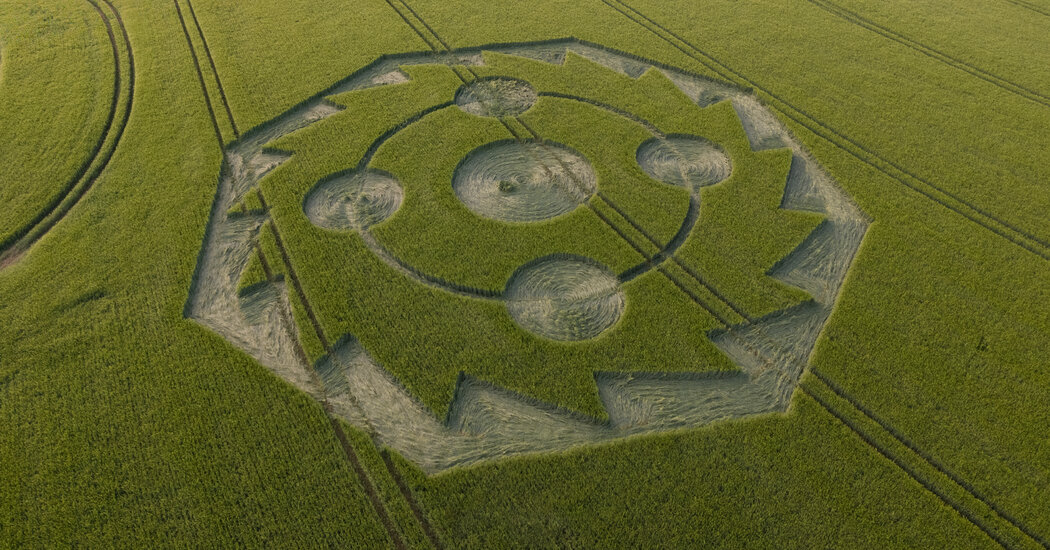 Intricate patterns carved in fields across England in the 1980s were a viral phenomenon long before the internet fed us such prankster curiosities daily.

CONHOLT, England — Standing hip-high in a large wheat field in southern England, one can make out an odd series of depressions in the swaying green crop, where some of the wheat has been pushed down lower than the rest.

It is only by looking at the field from high above that the real picture is revealed: The whirls and sharp angles that have been pressed into the wheat form an intricate pattern including a series of four circles orbiting a larger circle, all within a bigger jagged-edged disk that looks like a huge bicycle gear.

These strange markings in a farm district called Conholt, near the border of Hampshire and Wiltshire counties, are a crop circle, a rare current example of the mysterious patterns that regularly intrigued people around the world in the 1980s and ’90s, prompting speculation about alien visitors, ancient spiritual forces, weather anomalies, secret weapons tests and other theories.

The once-rapid flow of circles that sprouted in this part of England and spread to fields from California to Australia has now slowed to a trickle. When this particular example appeared overnight on May 22, it was the only known example in England.

Three decades after the height of the crop circle craze, the phenomenon has taken on a new significance as a reminder that even before the era of social media and the internet, hoaxes were able to spread virally around the world and true believers could cling stubbornly to conspiracy theories despite a lack of evidence — or even the existence of evidence to the contrary.

In the case of crop circles, the most important contradictory evidence emerged on Sept. 9, 1991, when the British newspaper Today ran a front-page story under the headline “Men who conned the world,” revealing that two mischievous friends from Southampton had secretly made more than 200 of the patterns over the previous decade.

Doug Bower, then 67, and his friend Dave Chorley, 62, admitted to a reporter, Graham Brough, that in the late 1970s they had begun using planks of wood with ropes attached to each end to stamp circles in crops by holding the ropes in their hands and pressing the planks underfoot. They had then watched with amusement as their anonymous antics eventually attracted media attention and began being copied by imitators around the world.

Mr. Bower and Mr. Chorley’s exploits are the inspiration for “The Perfect Golden Circle,” a new novel by the British writer Benjamin Myers. Set in 1989, it follows two friends who roam the English summer nights creating increasingly complex crop patterns.

The real-life pranksters phoned the newspaper to come clean, according to Mr. Brough, now 62, who says he verified their claims by checking an archive of more than 200 crop circle designs stored in a shed behind Mr. Bower’s home. The designs were clearly aged and matched the patterns they had made over the years, Mr. Brough said.

“I spent a week getting them to show me how they had done it all, and I have never laughed as much in my life,” he recalled. “The prevailing wisdom at the time was that aliens were about to land any day, but it had all been kicked off by these two blokes who’d have a couple of pints at their favorite pub and then head out into the night to have a bit of fun.”

“The so-called experts were adamant that humans could not possibly have made these circles, but Doug and Dave showed me how they did it,” Mr. Brough continued. “They stomped down the crop without breaking the actual wheat shafts and used ropes tied to a central stake to make the circles and a bit of wire hanging down from a baseball cap like a gun sight to line things up and make sure their lines were straight.”

The newspaper filmed the two men creating a pattern in a field in Kent and then showed it to Pat Delgado, a co-author of big-selling books on the mystery, who said it had definitely been made by a nonhuman “higher intelligence.”

The newspaper quoted Mr. Delgado declaring that “In no way could this be a hoax.”

“Delgado said that not only was it 100 percent made by aliens, but he could sense that the aliens had just left,” Mr. Brough said.

“When I told him the truth and brought in Doug and Dave, he recognized them straight away because over the years they had often been among the first people to turn up to look at a new crop circle. He said, ‘Oh my God, that’s why you two were always there!’ and he admitted he had been pranked.”

Mr. Delgado’s co-author Colin Andrews, a retired electrical engineer for a British regional council, quickly convinced him to retract his admission that he had been fooled, arguing that the pranksters could not have produced the blizzard of patterns that had appeared around the world.

“The people who wanted to keep believing in aliens and everything else just ignored the evidence, no matter how obvious it was,” said Rob Irving, who had begun emulating the two pranksters’ work in 1989 and befriended them after they went public.

Mr. Irving and a small group of friends formed the Circlemakers, who considered themselves a conceptual art collective rather than pranksters and were intrigued by the power that the anonymous creations held over the imaginations of millions of people.

“We took the baton from Doug and Dave and became the most active group making circles,” said Mr. Irving, 65, who now lectures in art and creativity at the University of Gloucestershire. “The power of the art came from the mystery, and Doug forever regretted coming forward because the mystery was lost.”

In its heyday there were probably five groups creating crop circles, Mr. Irving said, but there was conflict between those motivated by art and creativity and other crop artists who bragged about their work or even had their own paranormal theories about the origins of some circles.

Some members of Mr. Irving’s group used their skills to branch into lucrative work creating images for paying customers, earning tens of thousands of dollars for creating huge logos and symbols on crops, grass or sand for brands including Nike, Mitsubishi and Hello Kitty.

Nobody has come forward to admit making the latest circle in Conholt, which Mr. Irving described as “quite a nice design without being mind-blowing.”

While Mr. Irving liked to create circles that could be viewed by the public from nearby hills or other vantage points, the few crop artists who are still active tend to focus on an internet audience, contacting drone photographers as soon as they complete their work.

That can draw crowds of onlookers, like the dozens who stomped through fields in Conholt to view the latest design, much to the anger of the farmer on an adjoining property.

“The tourists can cause even more destruction than the original circle,” said the farmer, who would not give her name. She said the owner of the damaged field had considered mowing over the design to deter visitors “but then they would be losing even more wheat.”

“It is just so irresponsible to be trespassing and destroying food in the middle of a global wheat shortage, so if it was me I would be looking to prosecute,” she said.

Only one creator of crop circles has been prosecuted in Britain for vandalism, in November 2000, after he sent a photo of himself making a pattern to a “ufologist” to prove that it had not been made by aliens; the photo was passed on to the police.

Mr. Andrews, the co-author of Mr. Delgado’s books on crop circles, said he has also been tempted to give the police details of people like Mr. Irving, who he believes have cruelly deceived the public and investigators like himself.

Mr. Andrews, 76, claims to have invented the term “crop circles” after first viewing one in July 1983 and admits he has since made a good living from the phenomenon, having sold hundreds of thousands of books and traveled the world, giving up to three paid lectures or public appearances a week.

He said his invitations to speak “tailed off straight away” after the confessions by Mr. Bower and Mr. Chorley, but he continues to monitor crop circles and insists he is “more convinced than ever” that there are nonhuman causes.

“Where is the proof that all of them are man-made?” said Mr. Andrews, quickly adding that even if they are all man-made, he believes the people making the circles have unwittingly “been prompted by an independent nonhuman mind.”

Having suggested in the 1980s that the circles were created by fluctuations in the Earth’s natural magnetic forces, Mr. Andrews now believes that a God or “high level of nature” is sending us a signal (that the planet is heading for chaos).

“The mystery is still out there,” said Mr. Andrews, who now lives in Guilford, Conn.

Jeffrey Wilson, a founder of the Independent Crop Circle Researchers’ Association in the United States, noted with some skepticism that there is no scientific evidence for Mr. Andrews’s theory of “divine inspiration” but said his own view is that about one in five crop circles are not made by humans.

A former science teacher who now works as a data analyst in the retail sector in southern Ohio, Mr. Wilson, 52, insists that circles of nonhuman origin can be distinguished by things such as higher radiation levels and physical changes in plants.

He said his group has about 40 volunteers ready to investigate circles, but a drop off in U.S. sightings since peaks in 1996 and 2003-04 means “we have not been able to go into a field to investigate a circle since September 2012, in Chillicothe, Ohio.”

“We still just don’t have enough information for a valid hypothesis, so anyone who tells you they know how circles are being made is lying to you,” Mr. Wilson said.

Stephan Lewandowsky, a professor of psychology at the University of Bristol in Britain, said Mr. Andrews’s theory that a hidden hand is prompting people to make circles is an example of how “conspiratorial cognition and conspiracy theories are self-sealing.”

“If you puncture a hole in a theory with new evidence, like proof that people are making crop circles, it will seal itself by incorporating the new evidence or flipping it on its head,” Dr. Lewandowsky said.

“And,” he continued, “if you point out that there is no evidence for a theory, they will say, ‘Exactly! That shows how hard the deep state is working to cover it up,’ or the lack of alien sightings just proves how advanced the aliens are because they are invisible.”

Dr. Lewandowsky noted that this kind of thinking long predates social media. “What is going on is that some people feel they have lost control, and instead of admitting that we live in a world we can’t control they take comfort from believing that there is agency involved and someone who can be blamed, whether it is mass shootings being faked by actors, or 5G causing Covid, or whatever,” he said.

The difference now, Dr. Lewandowsky said, “is that while it took years for people to pay attention to crop circles and for the idea to spread, the internet sends ideas around the world within days.”

What Fall Fashion Looked Like the Year You Were Born

It’s Only August, But Editors Are Already Championing These Zara Boots

Brooklinen Is Having a Rare Sale on Its Best-Selling Sheets