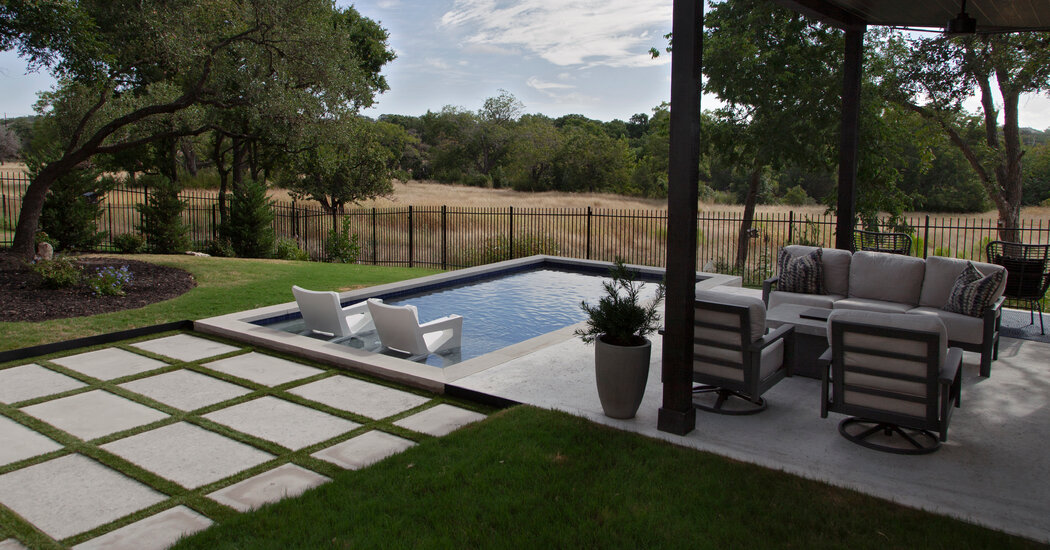 Plunge pools have become an alternative for homeowners who want a simple, less expensive way to cool off.

When Amy Holland bought her house in Austin, Texas, in 2020, she and her husband knew they wanted to have a pool in their backyard — but not just any pool.

“We don’t have kids, so we didn’t want some giant water slide, all the features,” said Ms. Holland, 46, who works in technology sales. “We really wanted just a ‘cocktail pool’ that we could dip in, have some drinks, have some friends over. We just didn’t want a big pool.”

The solution was a plunge pool.

While traditional backyard pools are typically 15 feet wide and 30 feet long, plunge pools tend to be no larger than 10 by 20 feet. They are also flat-bottomed and shallow, usually around five feet deep.

They are also less expensive to maintain and easier to build. The design chosen by Ms. Holland and her husband allowed for a pool that fit snugly into their sloped backyard and did not interfere with the lengthy root system of the 100-year-old live oak on the property.

Other homeowners like the minimalism of plunge pools, said Allison Messner, the chief executive of the landscape design company Yardzen in Sausalito, Calif.

“I think people that are drawn to plunge pools are looking for a smaller footprint pool, because maybe they have more functional areas in their yard, which is also a modern look,” Ms. Messner said. Larger swimming pools don’t allow for much else in the typical backyard, she added, while plunge pools leave space for dining and play areas. They can also “make your yard look and feel like a staycation spot,” Ms. Messner said.

Plunge pools are certainly not new. In nature, they take the form of deep basins at the bottoms of waterfalls, where erosion creates a natural swimming hole. The ancient Romans installed small circular pools, usually five feet deep, as part of their baths. Tiny pools inspired by the Romans’ example dotted British gardens in the 18th century. In the social media age, photos of plunge pools at tropical resorts or Grecian villas are often widely shared.

Once reserved for the wealthy in the United States, backyard pools boomed when gunite pools, a type of concrete pool, became more affordable for many homeowners. For a time, the kidney-shaped pool — often eight feet deep at the deep end, with requisite diving board — became a suburban status symbol, especially in Southern California, where neighborhoods were filled with the sounds of splash fights and games of Marco Polo.

Lucas Firmin, a pool builder in Baton Rouge, La., said that most pools he builds these days are about five feet deep.

Chapman Bullock, a co-founder of Proper Plunge Pools in Austin, said that, even before the new popularity of plunge pools, people were using traditional pools in a different way.

“When you sometimes go to a pool party, you’ll see everybody crowded in the shallow end standing together, and there’s a big area of the pool that’s not being used,” he said. “Just having a body of water to cool off in and relax is really what most people are looking for.”

The standard backyard pool isn’t going away but a host of companies have cropped up in recent years making prefabricated plunge pools easily accessible to a growing number of people. These companies also fill a gap created by labor and supply shortages facing traditional builders and help to cut back on costs and timing.

“I think the pandemic definitely drove demand for plunge pools for that very reason,” said Karen Larson, a co-founder of Soake Pools, in Pembroke, N.H. “Maybe even some people that might have been thinking of a large pool may have converted to the idea of a small pool.”

Ms. Larson said that Soake, founded in 2014, has had increased demand for its so-called “pre-cast plunge pools” in recent years. After the homeowner chooses the size and finishings (such as tile and bench options), Soake builds the pool off-site as a local landscape contractor prepares space in the yard. When the pool’s body is complete, it is transported to the home and placed on-site by a crane. The process takes anywhere from “a few days to a few weeks,” Ms. Larson said.

Other prefabricated plunge pool companies include Plunge Plus in Easton, Mass., and Modpools, in British Columbia. Modpools uses recycled shipping containers for its pools, which are available for delivery in the U.S.

Last year, Mr. Bullock, a designer, started Proper Plunge Pools in Austin with Ken Dineen, who has a background in construction. Mr. Bullock said he came up with the idea for a company dedicated to small pools after he tried to persuade pool builders to install one in his small backyard a few years ago. When the traditional pool builders balked, he designed and built a concrete plunge pool himself.

Proper Plunge Pools offers three different sizes of pools to people in the Austin area. It has installed 20 pools in the last year, Mr. Bullock said.

“A plunge pool, with these small lots in a lot of metropolitan places, allows you to utilize the square footage of your backyard more,” Mr. Bullock said.

Plunge pools are also less expensive than their full-size counterparts. According to a nationwide survey of 1,100 real estate agents conducted by real estate referral company Homelight, a mid-tier or upscale pool costs about $70,000 to $100,000 in the third quarter of 2020. Proper Plunge Pools charges around $40,000 to $60,000 for its smaller models.

“What we’re seeing in Austin is a lot of pool companies won’t even start talking to you unless you’re willing to spend $70,000 to $80,000, and then really at the end of it, you’re going to be spending close to $100,000,” Mr. Bullock said. “It’s a lot of money. At the end of the day, you’re getting something that’s just as high quality, and I think aesthetically looks just as good as a custom-built pool.”

Once plunge pools are built, maintaining them is also less expensive: They require less chemicals and water, and heating them uses less energy. “It’s more financially efficient for the homeowner, because the heating bill is significantly less,” said Philip Michael, owner of Cool Water Pool Works in Southampton, N.Y.

Smaller pools are easy to cool down and heat up, which makes them attractive to people who would otherwise close their pools in the colder months.

Leigh Profit, 42, installed a Soake plunge pool in the backyard of her Harpers Ferry, W.Va., farmhouse that she has turned into an Airbnb. ​​

“It’s extremely relaxing,” she said. “It can be heated up to as warm as you want — hot tub temperatures. So it feels really therapeutic, too, when you’re just in this calm water and plunged in there.”

Why The Work Jacket Is Must-Have Menswear

Braindead Wants to Prove That Magic: The Gathering Has Always Been Cool

Why The Gore-Tex Jacket Is Essential Streetwear Kit