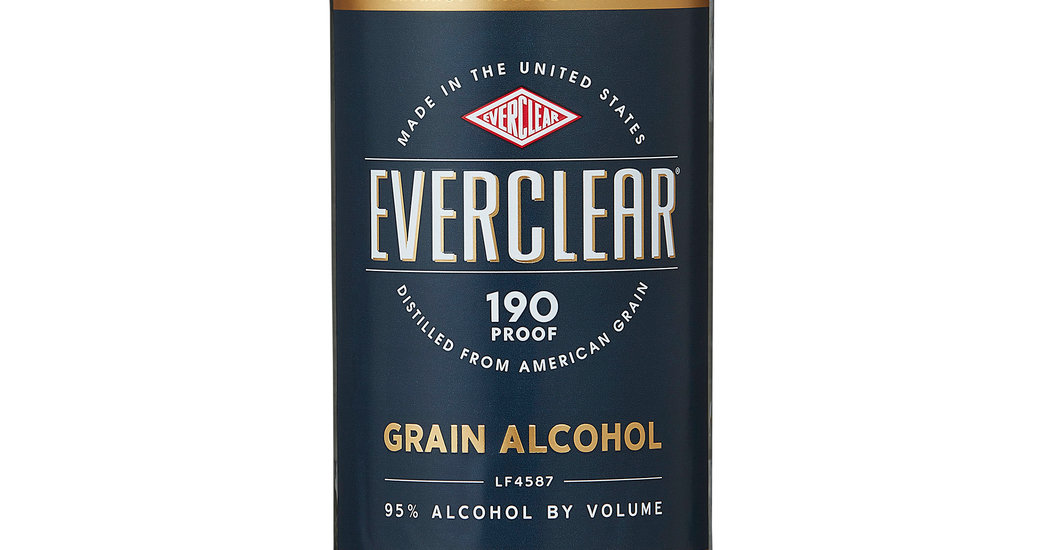 You know 190-proof Everclear by reputation. The bartender’s equivalent of jet fuel, this high-octane neutral grain spirit is more than twice the strength of standard vodka, and is illegal in 11 states.

It’s been mythologized by generations of fraternity parties and celebrated in song, Art Alexakis, the frontman of the 1990s post-grunge band Everclear, once referred to the liquor as “pure white evil.” Bushwick Bill, the late rapper from the Geto Boys, claimed that he shot himself in the eye in 1991 while plastered on Everclear and PCP.

How strange, then, that this storied party propellant has become a tool against the pandemic.

In an upside-down coronavirus economy where big-ticket indulgences (Caribbean cruises, luxury hotel suites) collapsed in value, and ordinary household items like toilet paper and flour started to trade like Bitcoin, Everclear was suddenly flying off liquor store shelves, as a substitute for drugstore hand sanitizers and other disinfectants.

With the household sanitizer shelves plucked clean, and $7.99 bottles of Purell at one point going for more than $100 on eBay, Everclear represented an ideal D.I.Y. germ-killing alternative, particularly when even standard rubbing alcohol, a key ingredient in many hand sanitizer recipes, was also hard to find.

Sure, there are plenty of online recipes for homemade hand sanitizers made from everyday vodka. But at 80 proof (40 percent alcohol), most vodkas fall short of the potency required for microbial sanitizers as recommended by the Centers for Disease Control and Prevention (60 percent alcohol, 120 proof) and the World Health Organization (80 percent, or 160 proof).

Tito’s Handmade Vodka, for example, took to Twitter to advise people against using its product as a virucide, although the company did produce and donate more than 325 tons of hand sanitizer to help battle coronavirus, according to its website.

One Los Angeles liquor store that typically sold a couple of bottles a week was suddenly selling cases of Everclear, The Los Angeles Times reported. (Only the 120-proof variation is legal in California; Everclear is also more widely available in its 151-proof form).

Demand was so strong in Utah, a state that in ordinary times ranks 50th in alcoholic beverage consumption, that authorities were forced to limit Everclear purchases to two bottles at a time.

Everclear’s new status as a household germ killer was hardly limited to hand sanitizing. “We’ve heard consumers say they are wiping fruit with it, cleaning door knobs and surfaces,” said McKenna Burst, who oversees the brand at Luxco, a St. Louis-based producer of multiple liquor brands.

The windfall came at a point when the company was trying to shed its notorious reputation and go upscale in the era of craft cocktails.

In 2018, Everclear changed its packaging. Instead of a label featuring an ear of corn that screamed “moonshine” and prominent warning labels that read “caution: extremely flammable” and “overconsumption may endanger your health,” the bottle now features a minimalist navy-and-gold label befitting a premium vodka.

The brand’s website, too, now boasts elegant, Victorian-style graphics that call to mind a craft cocktail bar menu or perhaps a French absinthe brand, and touts Everclear (diluted, naturally) for bartenders to whip up genteel cocktails with names like Summer in the Hamptons or Blueberry Earl Grey Pimm’s Cup.

It’s hard to say whether Everclear’s pandemic-era boomlet will help or hurt its effort to be taken more seriously, given that a lot of new customers seem to be snapping up bottles as a Clorox alternative.

But maybe the reality of the brand is in the eye of the beholder.

“The biggest thing we’ve seen on the brand is that it really is a blank canvas,” Ms. Burst said.

That, at least, is preferable to blank memories.