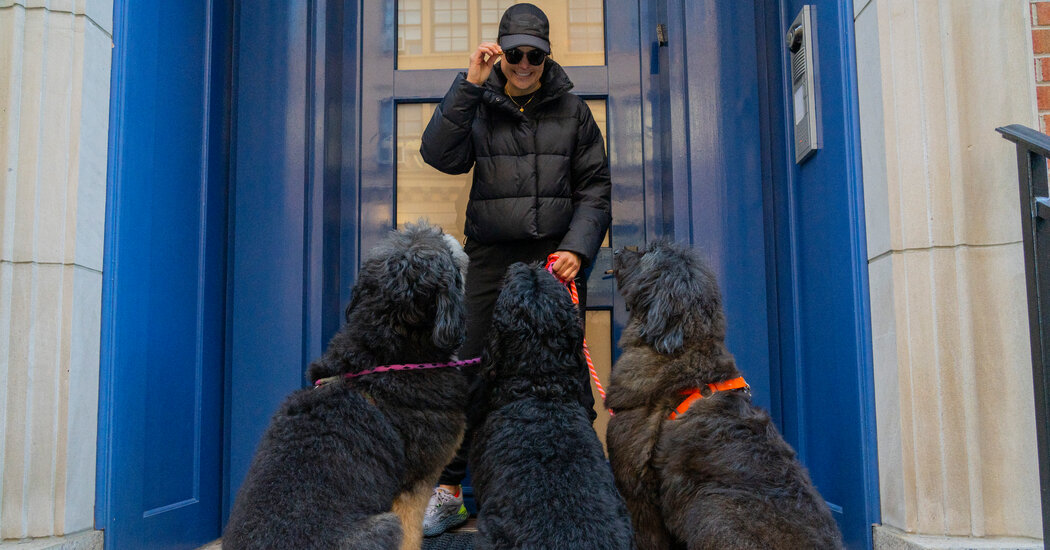 It’s all those pandemic puppies.

Dressed in black leggings and a puffer jacket, Bethany Lane, 35, was walking down Bleecker Street in Manhattan last Friday afternoon with a pack of three goldendoodles and one bernedoodle named Tinkerbelle. They poked their noses into the Whalebone store to collect some treats, before trotting along the Hudson River Park and having their photos taken by several tourists.

After an hour, Ms. Lane took them home to a stately townhouse owned by a 40-something professional couple who made their fortune in real estate. “It’s my job to make the dogs happy when their owners are busy,” she said. “I fall in love with these dogs. They are like my babies.”

Ms. Lane started walking dogs 11 years ago, after graduating from Rutgers University and moving to New York City to pursue a public health career. “I had to pay my rent and student loans, so I went on Craigslist,” she said. “I saw that somebody would pay me to walk dogs. As an animal lover who is obsessed with dogs, it was perfect.”

As business took off, she founded Whistle & Wag in 2014 as a boutique pet care service in the West Village. At one point, she was working 12-hour days, and she was able to pay off her student loans and hire other dog walkers.

Now, nearly three years after the start of the pandemic, she can’t keep up with demand. After raising her rates (she quoted one customer $35 a walk), and taking on dozens of new clients, she expects she will have made six figures last year (she declined to be more specific).

She feels confident enough about business that she bought a weekend home in Tuckerton, N.J., last summer. “It’s a three-bedroom home, but it has a very nice yard, and it is on the bay,” said Ms. Lane, who lives in a two-bedroom rental in the Williamsburg section of Brooklyn with her longtime partner. “I can go to whatever restaurant I want, whenever I want. I can go on vacation. I am very fortunate.”

“If I would have told my younger self I can make a living caring for dogs,” she added, “I never would have believed it.”

It is a lucrative time to be a dog walker, especially for pet entrepreneurs who cater to the wealthy. Though searches on Rover and other job sites yield beginner dog walkers in Manhattan who charge as little as $14 for a 30-minute walk, seasoned dog walkers with well-heeled clients are charging nearly three times as much, and earning $100,000 or more a year.

After all, it is a bull market for pet care providers. According to the American Society for the Prevention of Cruelty to Animals, more than 23 million American households — nearly one in five nationwide — acquired a dog or cat during the pandemic. With many Americans back in the office, somebody has to walk all those pandemic puppies.

“Prepandemic I used to get a call maybe one or two times a month from a potential new client,” Ms. Lane said. “I get multiple calls a week now. It is a lot of puppies.”

Dog walking traditionally appealed to those seeking a stable gig but also the flexibility to pursue other passions. It was an attractive job for actors, musicians, writers, students, retirees, stay-at-home parents and those figuring out what they want to do.

The rise in pet ownership, combined with a boom in pet care, has turned dog walking more into a business venture — not only for standard walks but also for more upscale services that cater to city dogs like nature hikes, day trips to farms, training camps and dog spas.

Among those looking to capitalize on the moment is Michael Josephs, 34, a former special needs teacher in Brooklyn who used to train Willy, his mixed black Labrador, at Prospect Park after school. “After three months I could ride my bike into the park, and he would run behind me,” he said. “People saw our rapport and asked me if I could train their dog.”

In 2019 Mr. Josephs decided to quit his teaching job to start Parkside Pups, charging $20 for a 30-minute group walk. Within a month he had about eight clients, working about five hours a day to make about $30,000 a year.

Business came to a halt during the pandemic lockdowns of 2020 but has since rebounded. “In 2022 we’ve been rocking it,” said Mr. Joseph, who lives in Middletown, N.J. “We used to mostly see clients in Downtown Brooklyn or around Prospect Park. Now we see dogs in neighborhoods you never saw many dogs before like Ditmas Park and Windsor Terrace.”

Mr. Joseph’s wife, Clarissa Soto, helps with the business, and the couple is considering expanding to a doggy day care near Prospect Park and an overnight camp in western Connecticut. “The biggest thing for us is we now have financial security for our son,” said Ms. Soto, who gave birth last year. “We have a savings fund set up for him, we have a college fund.”

They also have more discretionary income. “We just did a whole vacation with our families down in Disney World for six days,” Mr. Josephs said. “We went to Miami. We were in Canandaigua for a wedding, and stayed for a couple of days. We can splurge.”

Some dog walkers are doing so well financially that they are once again pursuing their passion projects. Maren Lavelle, 28, an aspiring filmmaker in New York City, took over a dog walking business, Big City Woof Walker, with a college friend in 2017.

At first, they worked eight-hour days, walking 15 to 25 dogs each day, and making $15 per walk. It was a grind — endless hours of picking up poop and corralling barking dogs — but they made enough to own their business outright, and hire about 10 walkers. Although the company closed for a few months during the pandemic, business has never been better.

They now have about 700 clients, employ about 25 dog walkers in New York City, along with an additional 13 walkers in Chicago, where they opened a second operation. To cater to the puppy boom, the company also offers socialization training. “A lot of the pandemic puppies didn’t get even the baseline of socialization,” Ms. Lavelle said. “They are fearful or react to every sound or movement because it’s super-novel to them.”

Ms. Lavelle feels secure enough financially that she has returned to filmmaking, and is making a short horror film set in upstate New York. “When the business took so much out of me and didn’t pay that much, it was hard to give my energy to filmmaking,” she said. “I actually now have a production company with my husband, and we make narrative films.”

“It costs money to make these films,” Ms. Lavelle added. “It’s cool that I can take my dog walking success and pursue a creative career.”

Jonathan Majors Has Figured Out the Two Best Cold-Weather Accessories: A Big Vest, and a Little Ceramic Cup

These Cheap Serums Are Just as Good as Their Expensive Counterparts

No Doubt—M&S Has the Only Coats, Boots and Jumpers We Want to Wear This Autumn