Noted nineties philosopher Skee-Lo articulated the condition of many a man when he said, “I wish I was a little bit taller / I wish I was a baller”. But for every Tom Cruise forced to accept the seemingly impossible mission of making himself look lankier, there’s a Peter Crouch banging his head against a brick wall. Not to mention low ceilings.

Fret not: we have your headache cure. Whichever end of the height spectrum you’re at, there are wardrobe hacks you can use to chop off inches (at least visually) or add them on as required. This is the long and short of how to dress taller or smaller.

Enhancing a Napoleonic stature needn’t be complex. The idea is that you want to draw the eye upwards, forming an unbroken vertical line and thus creating the illusion of height.

By minimising distractions between top and toe – with, say, slit pockets rather than patch or flap ones – you’ll give the impression of more distance between the two.

Remember the end of Big when Tom Hanks transforms from manchild back into an actual child in an oversized suit? Keep that in mind when you’re tempted to try and compensate for your small stature by buying clothes that are too large.

The armhole of your jacket should be high enough that there’s a gap between your torso and arms when they’re by your side, which is slimming and therefore elongating.

The rise of your trousers – the gap between the waistband and the top of your inseam – shouldn’t approach drop-crotch territory: your legs will just look stumpy. N.B. ‘Low-rise’ is not the same as ‘short-rise’: the former will scrape your hips, making your lower half, and therefore you, look disproportionately small; the latter will likely hit around your actual waist and be way more flattering.

If anything, your jacket could stand to be on the shorter side, as this will flash a little more leg, making you seem taller. That said, a full-on ‘bumfreezer’ will only cut you in half. And while slim is good, skinny fits will make you look like you’ve shrunk in the wash, along with your clothes. Hued have thought that wearing the same colour on both halves can make you look taller? Try a tonal casual outfit (shades of grey work especially well) or a dark suit. Ban big prints and logos in favour of clean lines and minimalism. Vertical stripes are one of the oldest tricks in the Style Advice For The Vertically Challenged Gentleman book (first edition)*, and for good reason: they’re literal lines that direct the eye up and down.

Ideally, you want clearly defined stripes that are not so tight as to be indiscernible but not so wide that you look like a walking barcode. Watch out for overly busy patterns that will clutter up your clean vertical line – or self-checkout machines going off as you pass. As a smaller man, you’ll probably have smaller features, and so should your clothes. Finer details like slimmer (but not too slim) lapels, ties and collars will send the eye upwards, whereas a huge footballer-on-trial tie knot will just dwarf your head, and you by extension.

Sidestep spread collars, which send the eye sideways. And rather than the classic half-an-inch of shirt cuff showing, keep it to a quarter. Every little helps. Like the giant you secretly wish you were, your outfit should be saying, “Hey, up here!” Restricting any points of interest like accessories – hats, pocket squares, eyewear, lapel pins, etc – to your top half will draw the eye upwards and keep it there.

If you’re wearing separates (and weren’t paying attention to the whole monochrome thing earlier), then darker colours on your lower half can also make your legs seem longer. Like an overeager illusionist, a (visible) belt will instantly saw you in half. Instead, take a hint from tailoring snobs and wear your trousers higher on your actual, ‘natural’ waist, not your hips. By doing so, you’ll emphasise your leg length and remove the need for a belt altogether.

If going beltless brings you out in a cold sweat, side adjusters will give you the security you crave without bisecting that all-important vertical line. Or there’s always braces. Trousers puddling over your shoes only reinforce the impression that you’ve borrowed your dad’s suit. No break means more shoe on show, and your trousers will hang straight and narrow – both of which will give you a boost.

Cuffs or turn-ups are debatable: in theory they break up the vertical line, but they can help the trousers hang better and add some heft to small frames. So, use your own discretion. Unless you actually are a baller, life is no picnic for the extremely tall guy either. Even picnics are no picnic: how can you reach the food when it’s all the way down there on the ground?

Ironically, this section will be shorter than the previous one, because in most cases the same principles apply – just in the opposite direction. If you are a human vertical line, then you need to send the eye sideways instead.

Where before an unbroken vertical line was the lofty aim, now it’s all about, well, breaking that line: patch or flap pockets, an extra ticket pocket, trouser turn-ups, distressed denim – these are all details that will bring you back down (closer) to earth.

The more you can fill in that vast expanse between top and toe, the better – and shorter – you’ll look. If short guys should wear all the same colour, then guess what? Get used to wearing separates, Hightower. That also means that, if your legs are particularly stilt-like in proportion to your torso, you can wear dark colours on your top half to balance yourself out.

And remember how belts cut you in half? Wear one. See where we’re going with this? 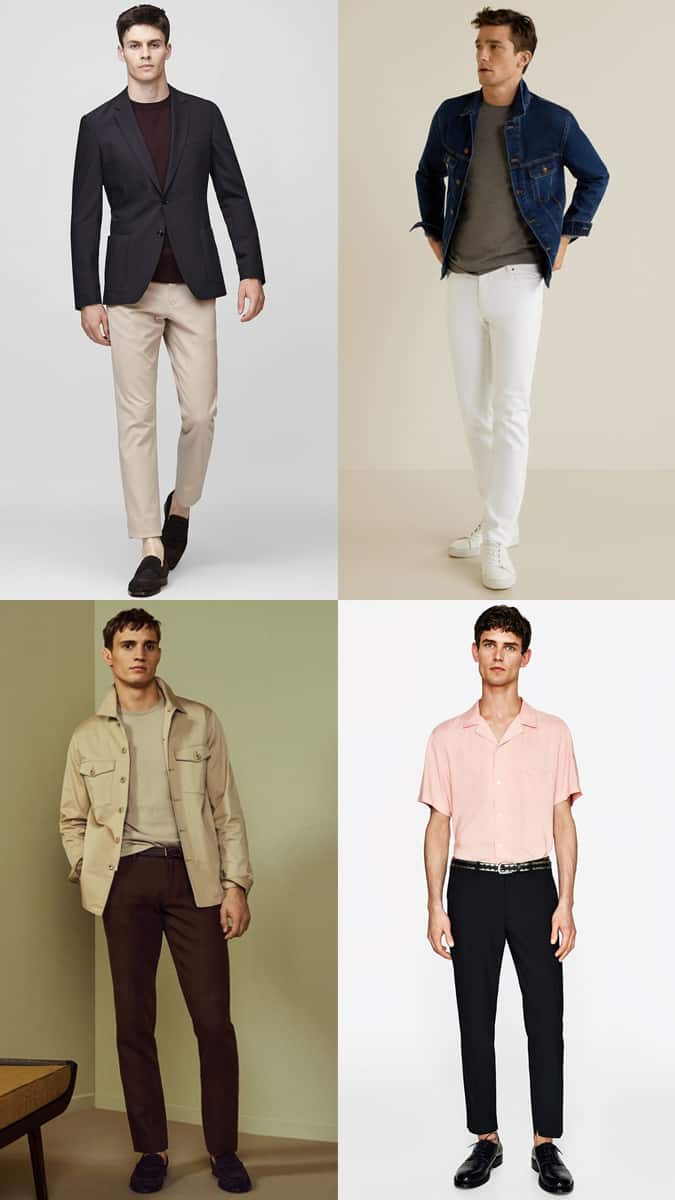 If, like Michael Jordan, you have sufficient handspan to palm a pumpkin, then your other accessories should be proportionally large.

Full-fat ties, paired with spread collars and wider lapels, will be your sideways-sending friends. A large tote bag will likely look better on your shoulder than a small backpack. As vertical stripes are a boon to the vertically challenged, any pattern with horizontal lines – like a Breton stripe or Prince of Wales check – is going to add some much-needed meat to your beanpole.

N.B. The pattern should be, like you, on a larger scale. Tight checks, narrow stripes and subtle tonal motifs will only draw attention to your stature.