It’s bold, it’s bright, it can be downright migraine inducing, and it almost certainly doesn’t feature in your wardrobe. Yet.

Tie-dye has long been the stuff of stylists’ nightmares. A swirling rainbow of uncool, it has a tendency to leave wearers resembling something that stumbled out of a tent at Woodstock in a cloud of smoke.

Suffice to say it hasn’t always been top of the menswear hot list. However, in a world of chunky trainers, warcore and wraparound shades, anything is possible. And tie-dye, the multicoloured marvel that it is, is simply the latest unlikely trend to have crept its way back into the mainstream.

This time things are different. Today, we’re seeing more consideration being put into styling tie-dye than before. Something which, surprisingly, has yielded some very wearable results.

Here we take a look at one of fashion’s most unlikely revivals and how you can incorporate it into your wardrobe without looking like a guy who spends his summers flogging Tibetan salt lamps at WOMAD Festival.

The clue is in the name. A form of “resist-dyeing”, tie-dye involves twisting, crumpling and bunching portions of fabric before tying them off with string or rubber bands and submerging the garment in dye.

This leaves parts of material either partially or completely unexposed to the dye, creating swirling, circular patterns across the surface of the fabric.

The practice picked up its name in the 1960s when it gained widespread popularity thanks to the likes of Janis Joplin and John Sebastian. It quickly became an important part of psychedelic ’60s and ’70s style, offering an inexpensive way for hippies to customise cheap plain tees, vests and army surplus gear. Although the 1960s is when tie-dye got its name, the method of twisting and dyeing fabric is actually much older. The earliest examples date back as far as 500 AD Peru, but similar garments have appeared everywhere from Asia to Africa.

Tie-dye may seem like a fad, but it’s something men have been wearing for thousands of years. Today, it’s a full-blown high-fashion phenomena, with the likes of Dior and Prada having recently sent their own haute-couture takes on it down the runway. And with some of the world’s snappiest-dressing male celebs getting in on the action (we’re looking at you, Jeff Goldblum and Jonah Hill), things only seem to be heating up.

Let’s face it, strutting around town looking like a walking magic-eye puzzle isn’t for everyone. If you’re just curious about dipping your toes into the trend without going full technicolour dreamcoat, consider utilising a tie-dye accessory. There are plenty of options here. Socks, cross-body bags, pocket squares and beyond. Whatever it is, just make sure it isn’t fighting anything else for attention. Tie-dye is pretty bold, though, so as long as you’re not pairing it with a tartan kilt and Coogi jumper you should be ok.

The cross pollination of dress codes in recent years has opened the doors up to sartorial experimentation. Wearing tie-dye with tailoring would at one time have been unthinkable. Today, however, it wouldn’t look out of place at a fashion week show. 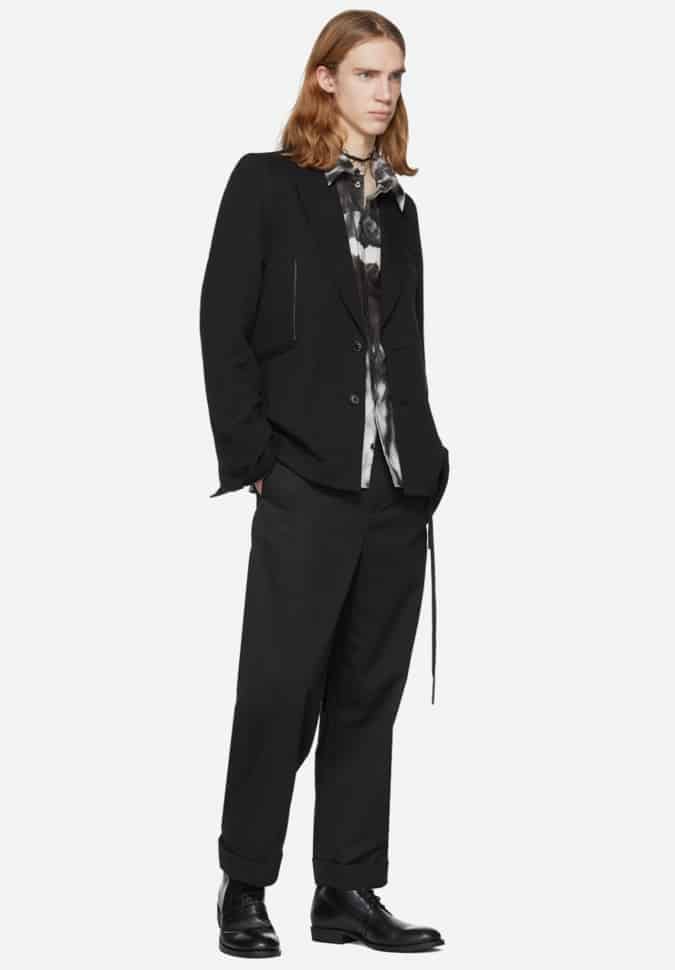 The key here is to keep the suiting classic and only incorporate one tie-dye piece per outfit. One way to achieve this is with a tie-dye tee worn in place of a shirt, tucked loosely into the suit trousers, and worn without a belt. Top it off with some fashion-friendly chunky sneakers, but for the love of god don’t wear it to a job interview.

Admittedly, you’d have to be wearing a pretty wild get-up for a tie-dye garment not to be the statement piece. However, if you’re going to dabble, it pays to make sure the rest of your outfit is as stripped-back and minimalist as possible. To wear tie-dye as a statement, first build a foundation consisting of basic staple pieces. Think plain chinos, tonal jacket and some simple white kicks. Use a tie-dye T-shirt or long-sleeve layered underneath as the focal point, allowing the bright colours to take centre stage.

The festival is tie-dye’s spiritual home. After all, the Western world’s take on this particular fashion phenomena has its roots in the days of Woodstock, rock ‘n’ roll psychedelia and all the rest of it. For a modern update, incorporate tie-dye into outfits featuring streetwear and sportswear staples. Try a bucket hat, windbreaker, shorts and sneakers – any or all of which can be as colourful as you like. Because, remember: there are no hard-and-fast rules when your rolling around in mud to the tune of Liam Gallagher, intermittently swigging warm, flat lager from a can.

“Tie-dye” and “subtle” aren’t ordinarily two phrases you’ll hear used in the same sentence. Unless, of course, that sentence is, “Tie-dye is definitely NOT subtle”. 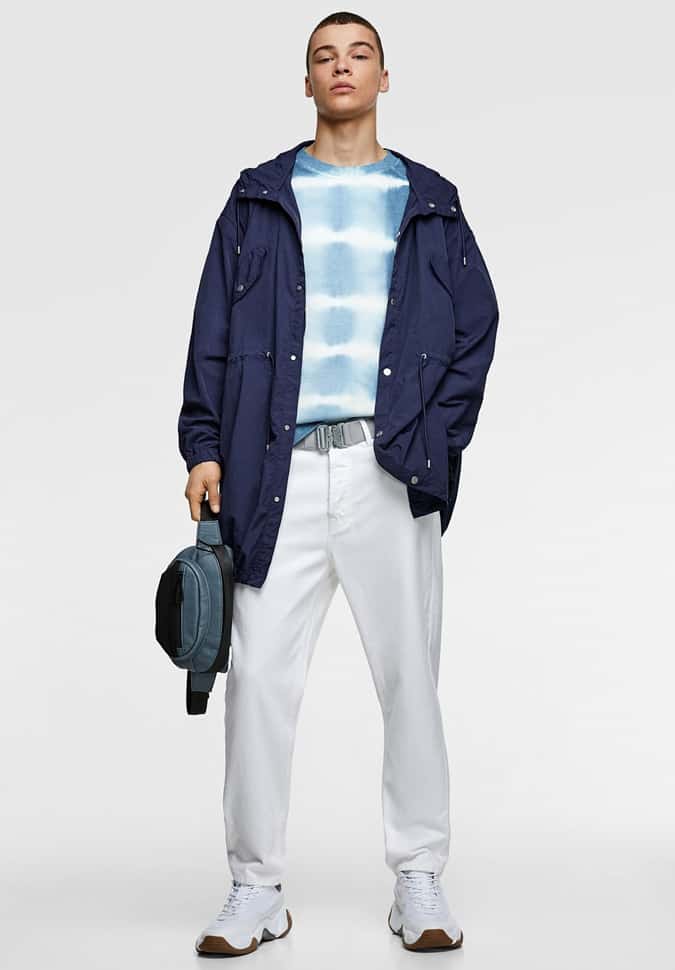 However, with the re-emergence of tie-dye as a trend, we’re being reminded that the colours used don’t have to be brash and garish. Earthy tones and neutrals are also fair game and some of the most wearable designs we’ve seen feature subdued black and grey patterning that’d be easy to slot into almost any outfit.

When it comes to incorporating a bit of the bright stuff into an outfit, a T-shirt should be your first port of call. Opt for a boxy, oversized fit for some added nineties nostalgia and wear with simple, staple pieces like slim-fit denim and white, canvas sneakers. 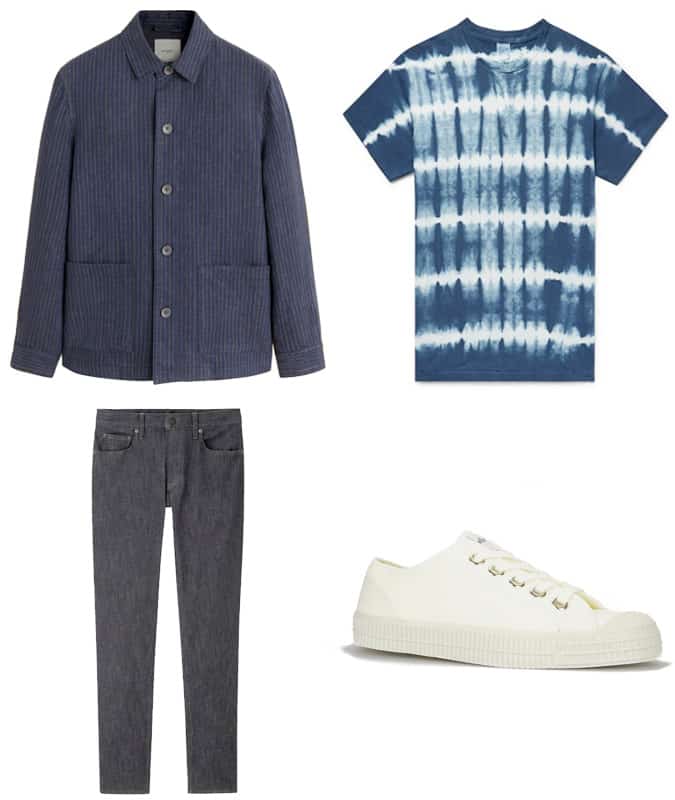 Tackle festival season in true balls-out fashion with a tie-dye bucket hat. Both the pattern and the garment are cornerstones of summer hedonism, so why not combine the two? Wear with a windbreaker, shorts, trainers you don’t mind getting trashed and some festival-friendly shades to mask the inevitable hangovers. 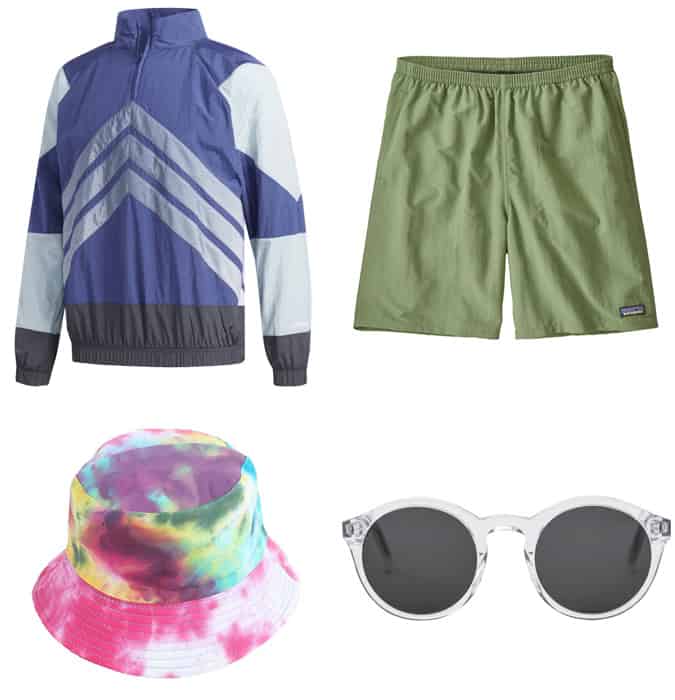 Tie-dye might be having a mainstream moment right now, but it’s nothing new in the world of streetwear. The hoodie is one of the scene’s key pieces and tie-dye versions of it have been designed by everyone from streetwear stalwarts like Stussy, to cult Japanese labels like Needles. To pull it off, keep things relaxed and mix with other street-friendly staples like cargo trousers and statement sneakers. Accessorise with a tie-dye tote bag to try the look out without fully committing. This can provide a handy way to inject a dose of personality into a look without going OTT. For best results, we suggest starting out with a simple outfit and using the tote as a statement piece. That means your garments should be simple and composed of a subdued palette to allow the tie-dye to do the talking. When the talk turns to tie-dye (as it so often does, we’re sure you’ll agree), sneakers don’t usually tend to be one of the first items on the agenda. That’s a shame, though, because donning a pair of colourful kicks is a great way to add some colour, and brands like Vans and Converse are making some excellent options. Again, keep things toned down elsewhere and let the shoes speak for themselves. 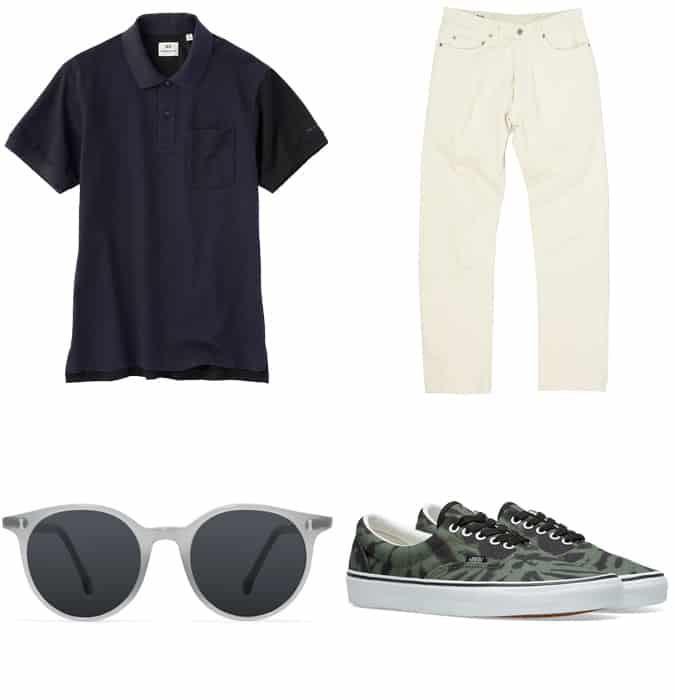 What’s Coming to Netflix in August 2020