Skip to Content
Home / Fashion / Women's Fashion / I Taught Myself How to Sew, and It’s Totally Changed the Way I See Clothes 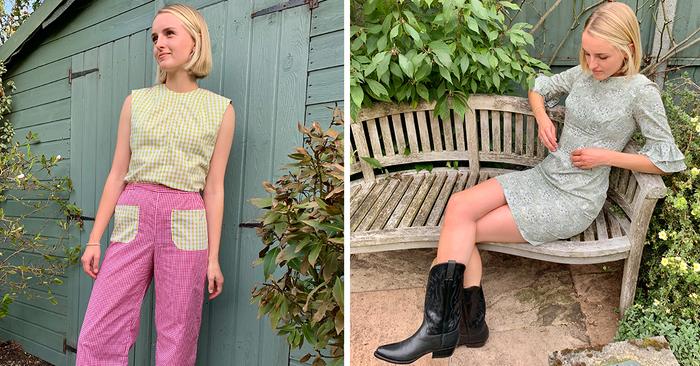 “More than five years ago, the home sewing market was still quite traditional, with only a handful of designers producing patterns, but since then we have seen the revival of different crafts, with sewing attracting many new followers,” says Rachel Walker, director of contemporary sewing website The Fold Line. “The sewing industry has responded to this surge in interest with an ever-growing number of new pattern designers and fabric ranges, also shows such as The Great British Sewing Bee have encouraged many more people to try sewing for the first time, particularly during lockdown.”

In the midst of lockdown malaise, making my own clothes has brought me the same sense of daily achievement that it did all those years ago, a craving that can’t quite be sated by another Zoom fitness class or Netflix binge. My homemade edit has swelled to include linen dresses, floral minis, a pair of checked trousers and a utility jacket for a friend’s 30th birthday. It seems I am not alone: John Lewis & Partners has seen a staggering 258% rise in sewing machine sales during lockdown, as people seek to pick up new hobbies. Meanwhile, high-end designers are even jumping on the DIY bandwagon, with JW Anderson releasing a knitting pattern for Harry Styles’s colourful patchwork cardigan in response to TikTok’s viral “cardigan challenge,” social media couldn’t get enough of it.

“The surge in making and craft, in general, has been lovely to see. Not only are we thinking more about how to use our time, especially when we’re off our screens, but we’re also excited to learn new skills”, says fashion influencer and home-sewer Zeena Shah. “Whilst there is fear of jobs and the economy, in general, it makes so much sense that you would try to upcycle a pre-loved garment rather than buy something new”

How To Wear The Retro Sportswear Trend

Yep, French Women Over 50 All Own These 6 Items