Skip to Content
Home / Business / ‘I’m aware I’m a bit of a show pony’: is this the end of street style?

London fashion week begins on Thursday. But if last week’s gathering in New York is anything to go by, it could be the smallest, and strangest, fashion event in the capital’s recent history.

Reduced to little more than a long weekend, New York hosted fewer than 10 – rather than the normal 70 or so – catwalk shows, as well as temperature checks, health questionnaires and socially distanced seating for a maximum of 50 guests for each indoor show.

If it was notable for its absence of big shows, the same could then be said for the guests. It was a case not of who’s who?, but of who’s there? On the pavement outside Jason Wu, New York’s opening show, a handful of photographers thronged around a DJ called Leigh Lezark and someone dressed as Spider-Man. Elsewhere, a handful of models in masks were photographed hurrying into venues. One of the few working outside the New York event, photographer Andrew H Walker told the Guardian the atmosphere was “lacklustre”. There was no Anna Wintour and in London, there will be no Edward Enninful, her British counterpart. Condé Nast, which publishes both, grounded its editors from international travel.

Luke Day, the editor of another Conde Nast title, GQ Style, says he is attending London, but as one of the figureheads of “street style”, a form of dressing that refers to the way clothes are worn, you know, on the street rather than, say, on the catwalk, his absence will be felt elsewhere. And to people like Day, this matters. 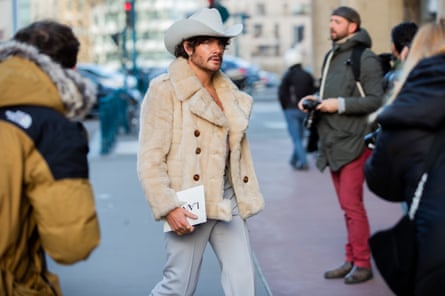 For about the last seven years, after Instagram “really took off” says Day, street style has become not simply an add-on of fashion week, but integral to it, as much a part of its architecture as the colonnades outside Paris’s Palais de Tokyo. Susie Lau, a blogger turned fashion powerhouse, agrees: “The events outside the shows – the post-show parties, the real part where people wear the clothes and network and show fashion in real life – those have become the real talking point.” Despite having half a million followers on Instagram, Lau did not attend New York either.

Thanks to social media, what you see outside the shows has become almost as important as what happens on the catwalk. It is also a better document of catwalk trends; occasionally, it even precedes them. Day’s preference for short shorts predates Prada by a couple of seasons, while British Vogue’s Sarah Harris was wearing Birkenstocks years before Proenza Schouler put them on the catwalk.

As one of the most photographed men in fashion, and often spotted alongside the editor of Another Man, Ben Cobb (once described as “unfrozen 70s man”, because of his dedication to the flares of that decade), Day has become known for wearing the seemingly unwearable. I once saw him napping on a red eye from New York to London, following a fashion show, wearing Gucci shorts, a Gucci jacket and matching bumbag. “I’m aware that I’m a bit of a show pony, but it’s within a unique situation,” says Day. “A fashion show is an event, so you dress accordingly.”

It is a powerful business, too. What someone wears to fashion week is a distillation of how a trend can translate to the everyday. “Before, only industry insiders would see what I was wearing. But street style [has become] a platform to show a wider audience what we all wear,” he says. This is particularly true given that the clothes on the catwalk will often not be on sale until months after the shows have finished. 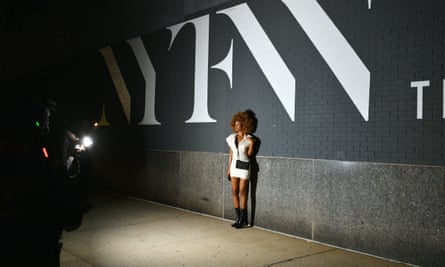 The roots of street style can be traced to the urban reportage of Diane Arbus, Bruce Davidson and Jamel Shabazz. In the late 70s, Terry Jones, the founder of i-D magazine, pioneered a head-to-toe documentary style of photography referred to as the “straight-up”, which continues to this day. Shabazz’s colour portraits of sidewalk supermodels from the 80s sit at the confluence of art and fashion, while Bill Cunningham, who had a photography column for the New York Times called On the Street, brought an overt focus to “city style”.

Cunningham referred to himself as a documentarian, yet his work – from women in galoshes crossing rain-lashed streets to Wintour getting out of a car – helped elevate modern street style to an art form.

Back then, the focus was on authenticity. The context of fashion week means the street style we see is still a somewhat structured version of reality – the Manhattan postman in shorts captured by Cunningham is very different from Luke Day in his – but it is still as authentic as high-fashion photography gets. As fashion photographer Jonathan Daniel Pryce, otherwise known as Garcon Jon, says: “The best shots are the ones that happen organically, in real time, of people going to work – because fashion week is work, believe it or not. They just happen to be dressed in a particular way.”

Not everyone is a fan. In 2013, the fashion writer Suzy Menkes wrote a critique of how street style had come to dominate the shows. She used the terms “black crows” and “peacocks” to compare the longstanding editors dressed all in black, looking to move discreetly between spaces, with a new generation, “the people outside fashion shows” looking to be seen.

But like most live events, physicality matters. Before the pandemic, fashion week was a phenomenon that contained aspects of the theatre or a vast party held at some gossip-laden medieval court. In short, it was something that seemed impossible to imagine without the presence of people. In the Premier League, fake crowd noise has been added to create an atmosphere. At fashion week, guests lend a democratic patina to an event, acting as the bridge between the catwalk and the street. The world of street style can be fashionable, but it is not exclusively “fashion” in the way a catwalk show is; how clothes are worn and who wears them are an aspect of fashion as cultural history.

“It’s the people who are in fashion, not simply the clothes,” says Matthew Gieve, a senior researcher at the Tavistock Institute. “The clothes derive their status from social processes, not aesthetic ones.” It is also a part of cultural, political and societal movements, he says, what the French sociologist Pierre Bourdieu might have described in the 1970s as cultural capital. Just as a coffee-stained Damien Hirst doodle can sell for thousands, a small label can take off if it is worn by the “right” person.

Fashion, like so many industries, has been upended by Covid-19. With a spotlight already on supply chains, wasteful practices and the climate crisis as much as the pandemic, it was only a matter of time before the catwalk shows – where trends begin – met their reckoning. At first, they did. Men’s fashion week and the summer’s couture shows moved online, other shows pivoted to videos, and a new word embodying the two – phygital – entered the vernacular. For a while, it seemed unlikely that the September shows would happen at all. 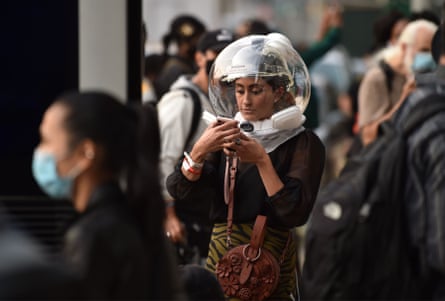 Life has not been normal for anyone since March, of course, least of all the people who usually make their name – and cash – from being photographed outside shows, as well as the photographers themselves. “Given the current climate, I was interested to see how fashion week would play out” says Walker. “Most of the notable guests and editors [have been] watching the shows virtually, [so] who I am able to photograph has been minimal.”

Garcon Jon has been shooting fashion week for 15 years. He has not flown to New York this season, and is still debating whether to attend the others, partly because of numbers and partly for health reasons. Speaking about the last time he shot at fashion week, he says: “There had been discussions at Milan airport about the virus, but the flights were still full, it was if nothing was happening. It was almost chilling.”

If physical shows do return, proposed changes include a return to a centralised format, with all the shows in a city taking place under one roof. This would allow for better regulation and checks. Shows that relied on being experiential, or ‘secret’ would be affected, but for the fashion writer and consultant Flo Wales Bonner, this is a necessary sacrifice. “Brands have been starting to embrace these alternatives to the traditional catwalk show since long before Covid – the ways in which they reach press, buyers and consumers are evolving,” she says. “I think Covid’s just accelerating something that was already in process.”

And then there are masks. “They are necessary, and I will absolutely wear one, but they will create [challenges], to photographers” says Pryce. “It’s not simply the uniformity, [and that] photographers won’t be able to recognise stars. Fashion is a fantasy; the masks will bring a sense of morbidity.” Stephen Lovekin, a New York photographer for Shutterstock, usually photographs “runway, backstage, or front row”. This season he only captured people on the street. But with many collections showing in blocks of fifteen minutes, traffic outside the shows was low. He describes attendees as “mask-heavy”. 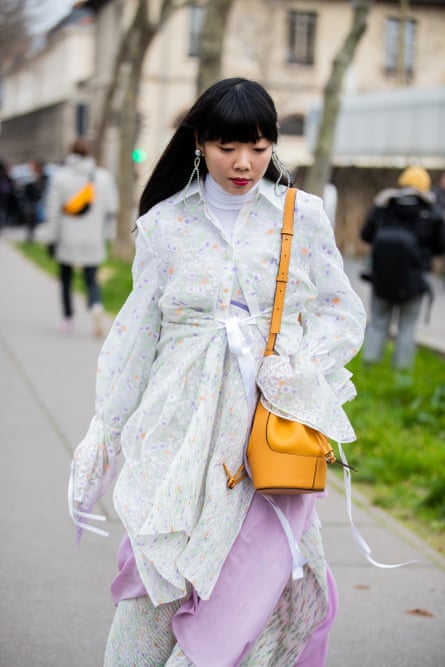 “Whatever happens to street style and fashion week as a larger moment will be temporary,” says Lau. “I think a physical fashion season will still occur next March [2021], or some semblance of it, and that circus or street style brigade will still be there.” She adds: “There is too much at stake not to get collections out.” Wales Bonner agrees: “If sporting events are going ahead, and people are allowed in offices again, it seems only fair that fashion shows are able to come back, too. Despite the changing landscape, they are still preferred by many designers and are therefore important for business.”

Day agrees: “Fashion shows aren’t just a presentation of clothes – they are fantasy and theatre, where trends are created and ideas are formed for seasons to come.” One way or another, the shows will go on.

Best Buy says its sales are rebounding as stores reopen; shares rise about 4%

The 5 Coolest Sneaker Drops This Week

In Conversation with Linda Pilkington of Ormonde Jayne