Skip to Content
Home / Fashion / It’s Time to End Racism in the Fashion Industry. But How? 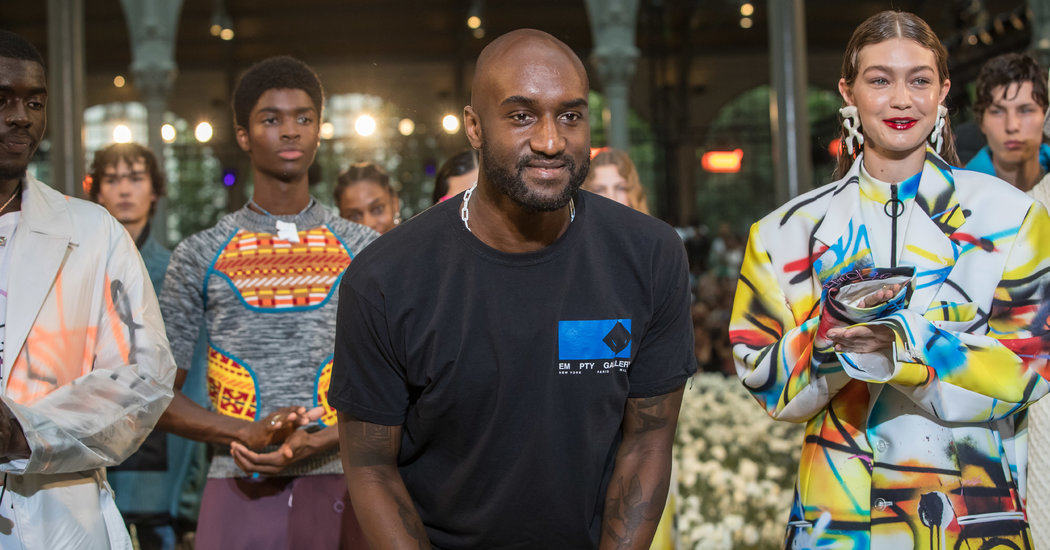 On June 1, Tom Ford, the chairman of the Council of Fashion Designers of America, sent a letter to the board about its meeting the next day. He wanted the board to address the Black Lives Matter protests against racial injustice, he said, and systemic racism in the fashion industry.

Almost everyone Zoomed in: Michael Kors, Virgil Abloh, Prabal Gurung and Vera Wang among them. It was, said someone who was there, an “animated” but not angry discussion. The group agreed that a statement would be released and an action plan written. Everybody was invited to email their thoughts.

“Having a clear voice and speaking out against racial injustice, bigotry and hatred is the ﬁrst step, but this is not enough,” it read, listing four initiatives to follow. Those included an employment program charged with placing black talent in all sectors of the fashion business to help achieve a racially balanced industry.

But not every idea that had been submitted was included. And not everyone liked the result.

It was, Kerby Jean-Raymond, the designer of Pyer Moss and a CFDA board member, told Highsnobiety, a “watered-down, bubblegum-ass statement that didn’t address the issues.” Specifically, he said, it didn’t address police brutality and what fashion could do about it. (Mr. Jean-Raymond was not available to comment for this story.)

More than 250 black fashion professionals, calling themselves the Kelly Initiative, sent a public letter to the CFDA accusing the organization of allowing “exploitative cultures of prejudice, tokenism and employment discrimination to thrive,” and announcing a more robust plan of their own, focused on accountability.

Then Aurora James, the founder and creative director of Brother Vellies, introduced the 15 Percent Pledge, which calls on retailers to devote 15 percent of their shelf space to products made by black-owned companies.

And then it turned out that another organization, the Black in Fashion Council, was being created by Lindsay Peoples Wagner, the editor of Teen Vogue, and Sandrine Charles, a public relations consultant. “Founded to represent and secure the advancement of black individuals in the fashion and beauty industry,” according to the mission statement, it unites “a resilient group of editors, models, stylists, media executives, assistants, freelance creatives and industry stakeholders” to “build a new foundation for inclusivity.”

Suddenly the debate was no longer just about systemic racism in fashion but rather just how far the industry was willing to go to be at the forefront of social change, and who was best positioned to lead the charge.

“Revolutions always begin fragmented,” said Prabal Gurung, a CFDA board member and designer who was raised in Nepal and who has been a champion of inclusivity. “Then, when united, the real change happens and history gets made.”

But can these distinct groups work together to reshape the American fashion world, or will the ideological and strategic differences that this singular moment has exposed diffuse their long-term effectiveness? It may seem like an inter-industry problem, but because of fashion’s position as a cultural touchstone, the answer has broad repercussions.

“This is not a time for compromise”

Virgil Abloh, the founder of Off-White and the men’s wear designer of Louis Vuitton as well as a CFDA board member, said that as far as he was concerned, the CFDA needs “to stand for the rights of black people in the fashion industry.”

“Anything less than that is a compromise,” he said, “and this is not a time for compromise.”

For decades, the Council of Fashion Designers of America, which was founded in 1962 by the publicist Eleanor Lambert to promote American fashion, has functioned as a central industry body. It is most famous outside of fashion for the annual CFDA awards, which tend to be called “the Oscars of American fashion.”

The organization has been active, as well, in lobbying for such fashion issues as intellectual property protection and immigration rights, as well as raising money for scholarships, breast cancer and H.I.V./AIDS-related issues. In recent years, it has also focused on issues of model health and safety.

But though the CFDA is often thought of as fashion’s “governing body,” it is not. It has no power to regulate its almost 500 designer members. Nor does it have authority over retailers or associated industry creatives, like beauty professionals. As a result, Mr. Gurung said, the “CFDA is doing the job it always does, and while they offer support to the industry, in the face of so much raw and immediate feeling, that job might not be enough anymore.”

“They are working on plans to put in action,” he said. “In the meantime you get a letter signed by 250 people who want change right now.”

That letter from the Kelly Initiative — named after Patrick Kelly, the African-American designer who in 1998 was the first American member inducted into the Chambre Syndicale du Prêt-à-Porter, the French fashion organization of designers — was conceived by Kibwe Chase-Marshall, a writer; Jason Campbell, an editor; and Henrietta Gallina, a creative director, and signed by a broad range of black fashion professionals, not just designers. It demanded that the CFDA conduct an industrywide census to collect and publicize the racial demographics of its member organizations; that those companies partner with headhunting firms to recruit black talent; and that they participate in third-party audits to ensure accountability and transparency.

“One of the key elements of change making, especially in regard to diversity and inclusion, is metrics,” Mr. Chase-Marshall said. “You need to collect some data, develop benchmarks of what a truly inclusive space would look like, and then goal-set, and calendar change as well.”

Ms. James, of Brother Vellies, who was unaware of the Kelly Initiative, also saw metrics as the key when she introduced the 15 Percent Pledge.

“The pledge started as an emotional response that needed a quantitative fix,” she said. “I was seeing all of the messages that people were sharing in my email and on my grid about these retailers saying that they stand with us. So while my black woman was really in a space of despair, my black business owner self was like, ‘OK, well, what is the metric that I can associate to the release of this grief?’”

“It is often about lack of access to capital,” Ms. James said. “Even getting in front of some of these retailers is really hard.”

The fashion model Joan Smalls has also gone out on her own, introducing Donate My Wage and committing half of her salary for the rest of the year to grass roots organizations that support Black Lives Matters. IMG, her agency, signed on, and she is asking fashion brands that hire her to share a portion of their earnings as well.

“They have the funds to continue the movement, and you’re going to need those funds to make it stronger and to make it a force to be reckoned with,” Ms. Smalls said.

The emergence of these disparate racial justice initiatives is both an acknowledgment of the perceived ineffectiveness of the CFDA, and a response to the various ways in which racial inequities pervade the fashion industry. But they also reflect the difficulty of galvanizing a community that is so diffuse and varied in terms of disciplines, organizational structures and access to capital and resources.

That is why the Black in Fashion Council, which will be officially announced this week, aims to be an umbrella organization for different types of initiatives, while also creating an index to score brands on progress. This will be what the founders call a “yearly public report and report card to hold fashion and beauty brands accountable for the great work they’ve done and the areas that need improvement.” (The council also could include media and marketing companies like Condé Nast, Ms. Peoples Wagner’s employer, and all member organizations will have to commit to being tracked for three years.)

Ms. Peoples Wagner and Ms. Charles said they already have 400 members signed up from across the black fashion community. “We are in a state of cancel culture right now, but we want to move to accountability culture,” Ms. Peoples Wagner said. “Any brand can pledge $1 million to the N.A.A.C.P. on Instagram, but who will follow up and check that they did it?”

“There is strength in numbers, and no point in being divisive,” she continued. “To effect change, we really need to come together. It’s a big dream and a big goal, but we think it’s attainable.”

Mr. Chase-Marshall said that the only sense the Kelly Initiative had of the CFDA’s response to their letter came from a statement given to Vogue Runway. In it, he said, the CFDA “said that they had been contacted by multiple sorts of efforts, and they’ve selected a curation that they’re going to support.”

Bethann Hardison, a former model and modeling agent who has been active on diversity issues for decades and who is also on the advisory boards of both the Black in Fashion Council and the CFDA, said she understood the tension and frustration.

“I was militant once,” she said. “We used to put down the N.A.A.C.P. That’s what you do when you are mad and want change. But am I glad it didn’t fall under our put-downs and stood the test of time? Yes, I am. Lots of people are mad now, I know it. And you can’t change anger. But I’m going to work with the CFDA because I can use it. I can use it as it uses me.”

Given the complexity of the problem, some believe a multipronged approach may be the most effective and enduring strategy. This is why Jason Bolden, a stylist, is on both the advisory board of Black in Fashion Council and a signatory on the Kelly Initiative.

“It is about unity for me,” Mr. Bolden said. “One does not outdo the other. We have to keep nurturing them all and keep on keeping on.”

Tracy Reese, who recently left New York to create the sustainable clothing line Hope for Flowers in her hometown Detroit, is vice chairwoman of the CFDA and its longest-serving black board member.

“This is a white industry, and unless you are black within it, you can’t begin to understand what that is like,” she said. “If we are going to make meaningful progress, there has to be a joint effort, not a factional effort — or 20 different efforts.”

“The people forming these factions know what they want to say — they are brave,” Ms. Reese continued. “They are stepping up, and that’s important to do. But it will go further if we are all working toward a common goal: equity, equality, anti-racism.”

“It’s really a conversation that needs to be had,” she said. “It’s multiple conversations, about the present and where we are and the future and where it is going, and there are grievances from the past that need to be heard.”

Get a Glimpse Inside the Obama-Era White House

A Master List of Presidents Day Sales Actually Worth Shopping

4 Reasons Why Probiotics Should Be Part of your Diet