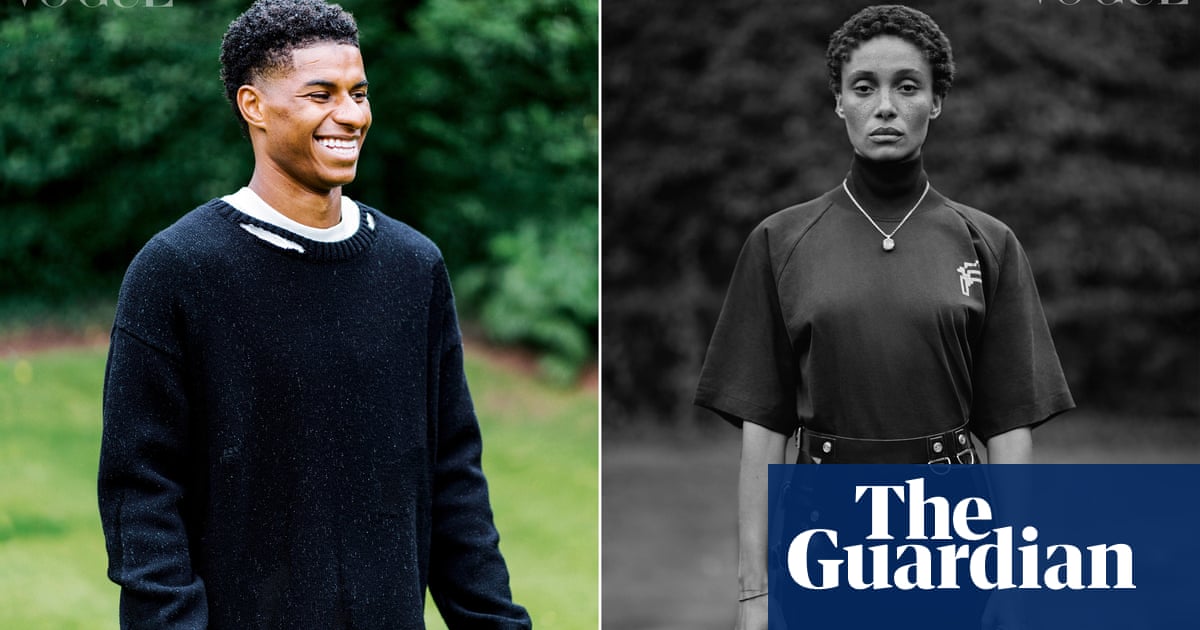 Marcus Rashford’s inspirational, policy-changing campaign against child poverty has garnered him accolades aplenty. Now it has also propelled the footballer on to the front cover of British Vogue’s September issue.

The Manchester United striker, who forced a government U-turn on the granting of free food vouchers for the poorest families over the summer, headlines a special edition dedicated to activism.

Rashford posed alongside Adwoa Aboah, the supermodel turned mental health activist, for the Activism Now issue. While Aboah has graced Vogue on several occasions, it’s a first time for Rashford.

The footballer said: “I’m by no means a politician but I had a voice and a platform that could be used to at least ask the questions. If I didn’t put myself out there and say, ‘This is not OK and it needs to change,’ I would have failed my 10-year-old self.”

The photograph was shot by Misan Harriman, the first black male photographer to shoot a cover of British Vogue in the magazine’s 104-year history. A predominantly black team was on set for the shoot.

Rashford, whose campaigning has led to him becoming the youngest recipient of an honorary doctorate from the University of Manchester, and Aboah, who founded the online mental health community Gurls Talk, head up the issue, which throws a spotlight on 40 “faces of hope”.

The September issue of Vogue is regarded as the most important of the calendar. This year all 26 international Vogues are dedicating their issues to the theme of hope.

“British Vogue’s interpretation is an ode to the extraordinary voices, the majority of whom are women, who have been critical to driving change forward,” the magazine said in a statement.

British Vogue’s editor-in-chief, Edward Enninful, said: “At its core, British Vogue’s September issue is our show of thanks, as well as a rallying cry for the future. When all is said and done, it’s clear that 2020 will be remembered as a tough year, but also as a moment of necessary change. One thing is for certain. The future starts now.”

Others highlighted include the American fashion model Bethann Hardison, known for her activism on diversity in the fashion industry; Brianna Agyemang and Jamila Thomas, the two young music executives behind the “Blackout Tuesday” social media protest in support of the Black Lives Matter movement; and Patrick Hutchinson, the BLM protester photographed carrying a white football supporter to safety during anti-racist protests.

British Vogue has also organised two activist roundtable talks. The first, hosted by Aboah, discusses community activism. The second, released on Wednesday, and introduced by Enninful, will be hosted by entertainment and sports agent Darnell Strom and will discuss 2020 as a watershed year for activism.

From Beyoncé covers to indie shoots: the new generation of black fashion photographers

Harriman said: “To be the first black male photographer in British Vogue’s 104-year history to shoot a cover is an honour, but let’s be clear, this has Edward Enninful written all over it. His ability to force change whilst empowering others is a lesson to us all. He knows that there are many talented people from a diverse background who have never had a fair chance – finally the door is ajar.”

Last year’s September British Vogue cover was guest-edited by the Duchess of Sussex.

Sports to Watch This Week