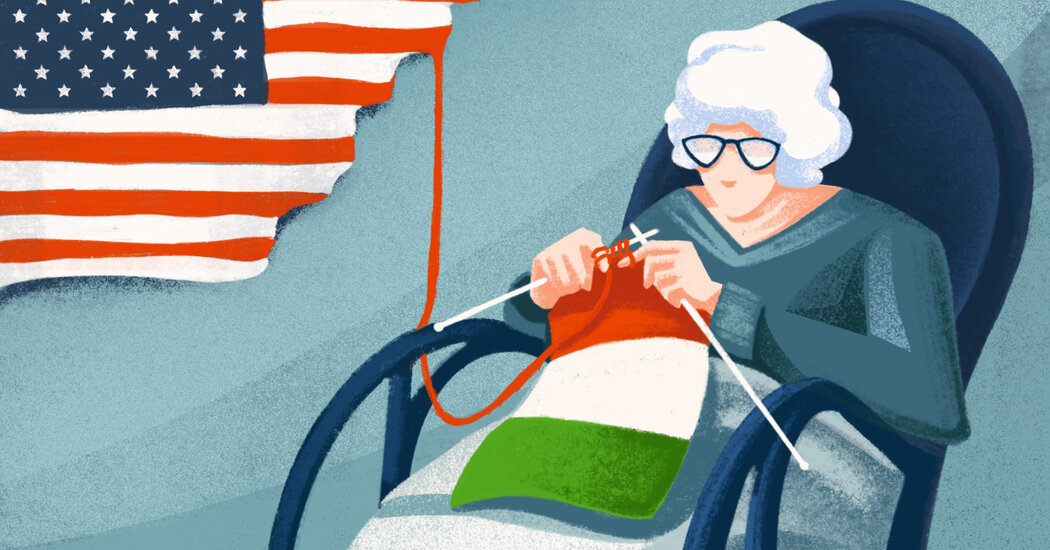 Growing up in Chicago, Juliana Calistri was surrounded by all things Italian: music, food and language. Ms. Calistri’s grandparents were raised in Bagni di Lucca, Italy, and though her father was born in Chicago, he spoke Italian before he spoke English.

“If you ask me to bake, I’m going to make biscotti and lemon knots, not chocolate chip and oatmeal raisin cookies,” Ms. Calistri, 46, said from her home in Nashville. “Being Italian has always been my identity.”

Ms. Calistri, a claims advocate for a brokerage firm, always wanted to live abroad, but thought gaining Italian citizenship would be impossible. According to Italian laws, women could only pass their citizenship to their children after 1948, when Italy’s current constitution came into effect. Ms. Calistri’s father was born in 1947, so he did not inherit citizenship from his mother. His father gave his Italian citizenship up when he was naturalized in the United States.

In May, Ms. Calistri began working with a life coach, who pushed her to look up the laws again. Ms. Calistri discovered that since a landmark ruling was made in 2009, people have been contesting the 1948 maternal lineage law in court, and winning.

She decided to apply. “The pandemic really allowed me to get to basics,” Ms. Calistri said. “You look at what you need in life and what’s most important. It’s my family and not things. This identity and this culture is exactly who and what I am.”

When Ms. Calistri contacted Italian Citizenship Assistance, an agency that helps people acquire Italian passports, she joined hundreds of other people who have reached out to the agency during the last few months, said Marco Permunian, the founder. “We have seen the number of people who contacted us between May and now increase by five times from last year,” Mr. Permunian said. His team of 48 is overwhelmed. “We’re getting so many requests, we’re not even able to handle them all.”

Ms. Calistri plans to move to Italy with her 9-year-old daughter and her 73-year-old mother as soon as she receives her new passport. “It’s such a me-first attitude here, and there’s no sense of unity,” Ms. Calistri said.

As the pandemic has ravaged the United States, some Americans are finding that a second citizenship or permanent residency has a renewed appeal. “Even the most basic things have become politicized,” said Anjelica Triola, 34, a director of marketing at Wethos, a company that helps freelancers grow their businesses, who also has Italian heritage.

She brought up protective masks as an example. “My father’s parents came here to be free, and there is an entire generation that are trying to go back now to pursue similar freedoms,” she said.

Some see it as a kind of insurance policy, a way to ensure freedom of movement in the future. Newfound free time at home has enabled others to engage in a laborious application process they have had on their to-do lists for years.

There are two paths to acquiring a second passport that don’t require living or working abroad: spending a lot of money or proving that you have inherited an ancestor’s nationality.

Many countries offer residence visas to people who invest in them, a type of program that is colloquially referred to as “The Golden Visa.” Some nations, like Cyprus, St. Lucia, Grenada, Malta, Turkey and Montenegro, offer citizenship to people who buy property within their borders or invest.

Every country has its own rules. In Cyprus, the government takes about eight to 12 months to process a passport application made through investment, whereas in Montenegro it can take as little as three months, according to Henley & Partners, a British-based law firm that advises high-net-worth clients on these types of programs.

“The pandemic has been terrible in so many ways,” said Paddy Blewer, the director of Henley & Partners U.K. and the group director of public relations. “For lots of our clients, it has been the tipping point for, ‘I’ve been thinking about doing this, but now I really understand how significant volatility can be around the world and I need options.’”

Mr. Blewer said that Henley & Partners has seen one and a half times as many inquiries from January to April of this year as during the same period last year. Those who secure the services of Henley & Partners pay anywhere from 20,000 euros, or $24,000, to €500,000, depending on the complexity of the case.

Families are considering eligibility costs, speed of application approval, and education and health care policies in the various countries.

Freedom of movement is also important. Arton Capital, an advisory firm specializing in investment-based citizenship or residency, has a tool that ranks passports based on different factors, like the mobility they afford their holders. Look up the U.S. passport on the Passport Index today, and you will see that Americans can travel easily to 87 countries. In 2019, that number was 171.

“The drop of American passports over 50 percent in terms of mobility was a wake-up call for a lot of families,” said Armand Arton, the founder of Arton Capital. “The almighty U.S. passport is not as powerful as it used to be.”

People who are born in the United States are automatically citizens. In many other countries, nationality is passed from parents to their children. In terms of dual citizenship, this has meant people who are descendants of immigrants from some countries can claim citizenship in those countries if they can prove that the lineage has not been broken over a certain number of generations.

Descendants of Latvian citizens who fled the country during the German or Soviet occupations, for example, can apply to have their citizenship reinstated there today, said Evgeny Belyaev, whose law firm offers citizenship and immigration services in Riga, a city in Latvia. People of Italian descent, of whom there are about 16.5 million in the United States, can restore their Italian citizenship through parents, grandparents and even great-grandparents.

Applying for heritage-based citizenship has become popular among Americans with roots in some countries. But in most of the world, heritage-based citizenship is more difficult or less advantageous for a U.S. passport holder to obtain, because nationality is passed only from parent to child, because the country does not allow dual citizenship (which means the American would have to renounce her U.S. citizenship) or because the second passport does not offer benefits like expanded travel options or free education.

The practice of establishing a second nationality has risen in the past few months.

“I see how European people have really stepped up to take a collective problem and work together toward achieving the goal, i.e. of getting rid of the virus,” said Susan Periharos, who began her application process for Greek citizenship about four weeks ago. “The pandemic pretty much clinched it for me.”

Ms. Periharos said she is not fleeing the United States, but she sees certain advantages of having a second passport: She and her husband will be able to travel to Greece even if there are entry bans for Americans in the future, and with a passport from a country in the Schengen zone, her children will be able to live and work in most of Europe.

Andreas Politis, who works as a managing associate for Christina Mantas & Associates, which is helping Ms. Periharos with her case, said that the firm has seen about a threefold increase in the number of people who want to apply for a Greek passport.

“A lot of it is people who come back to Greece almost every year, and they want to make sure they can come back to their families in the future,” Mr. Politis said. Most American citizens are currently banned from entering Greece because of the coronavirus. “Traveling to Greece with a U.S. passport is usually very easy. Before, it didn’t make sense to apply for a Greek passport. Now it does.”

Mr. Politis said that Christina Mantas and Associates charges clients seeking Greek citizenship 600 euros, or $700, to €2,000 for the firm’s help. The process can take from three months to three years. Mr. Permunian’s agency charges an average client about $6,000 for support from beginning to the end.

As part of a heritage-based application, people usually have to submit birth certificates, naturalization records from the United States, and marriage and divorce records. The process takes time and patience.

“With Covid, the world has paused a little bit,” said Bianca Ottone, the founder of My Italian Family, which has been providing citizenship services since 2001. Ms. Ottone said the number of people contacting her company has gone up by about 50 percent during the past six months. “Many people contacted us saying, remember we discussed this in 2018 or 2019?’” she said. “It was in their pipeline and now is the time to pick it up.”

Ms. Triola, the director of marketing for Wethos, started looking into getting Italian citizenship in 2018 but let the project fall to the wayside after running into some difficulties with obtaining her grandparents’ marriage certificate and with mismatched names on documents from the United States and from Italy. But recently, Ms. Triola decided to pick her application up again.

“It feels as if there is more freedom if you are an E.U. citizen,” said Ms. Triola, who lives in Los Angeles. “I haven’t pursued graduate school because I can’t justify putting myself $100,000 in debt to get a master’s degree or a Ph.D. If I were to do that as an E.U. citizen, that could be entirely free.”

Affordable health care and guaranteed paid parental leave are other advantages to having an Italian citizenship, she said. Ms. Trioladoes not expect to see these benefits in the United States anytime soon. The current political atmosphere, she said, makes her “skeptical that we will achieve the things we need to achieve to live comfortably here.”

Dave Gallo, 73, a retiree in San Francisco, began the application process for Italian citizenship in 2017 and was approved in February of this year. The pandemic has confirmed that he made the right choice, he said. Despite the age difference, his reasoning is not all that different from Ms. Triola’s.

“In San Francisco, there’s nothing for old people except nursing homes,” Mr. Gallo said. After visiting Italy for the first time in 2015, Mr. Gallo discovered seven cousins who live there. As soon as he is able to, Mr. Gallo plans to move to the town in north Italy from which his grandfather came to America. There is little traffic there, the cost of living is cheaper, it is surrounded by vineyards, and Mr. Gallo said he finds it easier to connect with people there.

“The pandemic has created so much uncertainty that no one knows what life will be like for the next 10 to 15 years,” Mr. Gallo said. “For an old person, it’ll be even more difficult. Where do I want to spend the rest of my life?” For Mr. Gallo, the answer is clear: Italy.

Jeremy Scott Trusts in the Emotional Power of Fashion

Snowboarder Chloe Kim on Hot Cheetos, Roxy, and Going for Gold (Again) at the 2022 Winter Olympics

Where to Buy Secondhand Bags (Without Getting Scammed)