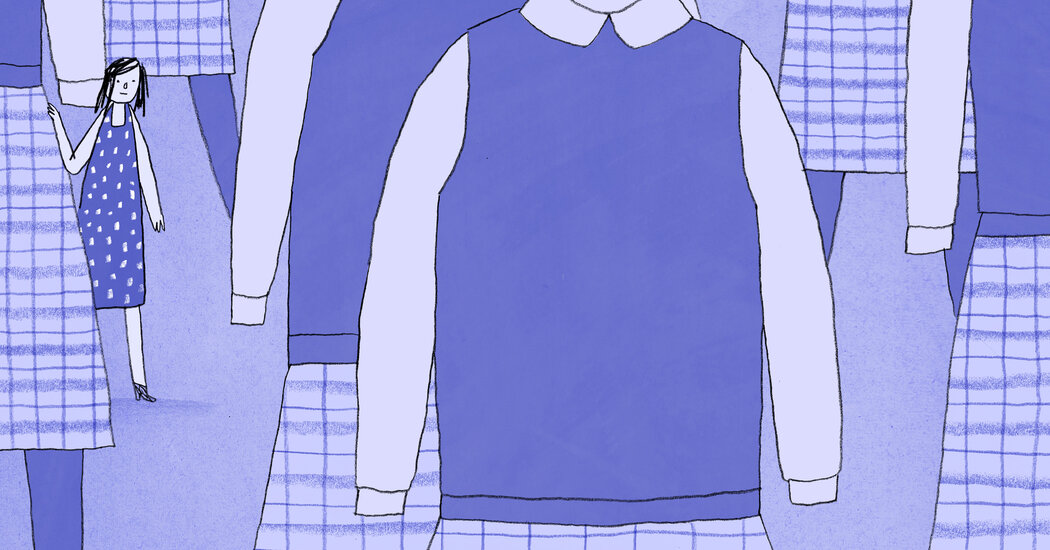 As an ultra-Orthodox Jew, I tried to “pray my gay away.” It didn’t work.

I was scrolling through psychotherapy memes on Instagram a few years ago when Hannah popped up in my friend requests. We each had new last names and new looks. I had decided that since I had to wear wigs anyway (as an ultra-Orthodox Jew), they may as well be blonde instead of my natural dull brown. She wore a mixture of wigs and other creative head coverings.

We “hearted” each other’s posts, not daring to break our silence with actual words.

“She seems happy,” I told myself, my fingers hovering over her photos. “Don’t start anything.”

Still, I found myself imagining her as the girl I once knew in braces and a messy bun, without makeup or laugh lines, who slung her backpack down near me on the first day of tenth grade in Borough Park, Brooklyn. While our classmates penciled equations onto graph paper, she drew on her arm in neon gel pen: “Hannah.” I rolled up my identical navy checked sleeve and put ballpoint pen to my own pale skin: “Malka.”

She smirked. I wanted to know everything about her.

She was from another city, where there were no Orthodox Jewish high schools. “I don’t get this place,” she said.

“I will tell you everything you need to know,” I said.

She lifted a brow and laughed.

At night, in the emptiness of my house, I worried about her. My family had splintered, my mother living behind the closed door of her bedroom and my father practically sleeping at his warehouse. Hannah, though, was staying with a local Jewish family for the school year. She had no family in town at all. It felt natural for me to invite her to have some of my mother’s home-cooked dinner. It felt obvious that she should stay the night. At our sleepovers, despite the flashing alarms in my mind, my body felt right at home pressed against hers.

We moved around the shape of each other, careful under the fluorescent lights of our classroom. Still, the other girls noticed, whispering things about us looking like we could be sisters, trying to name something that none of us knew how to express. We were preparing to graduate in the new millennium, meet yeshiva boys, and then meet our true purpose through getting married and having children.

When the silence in my home started to feel stifling, I moved to Toronto and stayed with some cousins for the last two years of high school. I was relieved to be away from temptation.

I followed the precedent of our sages and fasted on weekdays until I could feel my hip bones poke through my uniform skirts. Even that reminded me of Hannah, though, of the long skirts we shared and how they fit our thin bodies in almost the exact same way. “Help me stop missing her,” I asked God until the ache in my soul took over and my better judgment faded. “Please forgive me,” I prayed, as I dialed her number, my Nokia cellphone to her boarding family’s landline.

After months of distance, we met up in Brooklyn at a concert. We watched Kineret, our community’s superstar, her long sparkled gown sashaying as she filled the room with song. I clenched my shoulder blades together. Tight. Tighter. Hannah was so close that I could feel the movements of her body in the air between us. But I could also hear the low hum as dozens of pious voices joined Kineret’s, singing about the world to come. Not exactly the appropriate soundtrack for acting on my unholy desires. When the music ended, we watched the crowd disperse onto the streets, a stream of girls and women in modest garb.

“Want to sleep over?” I asked, trying to take the urgency out of my words, trying not to hold my breath.

“Sure! Can we get pizza?” In the dim glow of the streetlights, I saw her grin.

We created our own concert later that night, a silent orchestra of skin on skin, her breath in my ear and the pounding of our hearts against each other in the dark. We held each other afterward. I felt her face against mine, her fingers trailing down my back.

I wanted to say: “I think about you every single day.”

Her breathing slowed, but I could feel her, still awake, playing silent notes along with me all through the night. As the sunlight bled through my window blinds, I tried not to notice the slope of her pale shoulder, the way her dark hair spread over my pillow.

“This is the last time,” I promised myself — and God — as I slid my leg out from between hers.

In the morning, we parted, she back to the boarding family and I back on a plane to my school in Toronto. I doubled down on my quest toward heaven, writing words to God in the margins of my prayer books.

I kept hearing through the grapevine that Hannah was barreling down the path to hell. Each time I came home to New York and saw her, it felt like there was a chasm between us, widening. When our eyes met, I looked away, at the new silver hoop in her nose, her bell bottom striped pants. I knew I must have looked like a religious fanatic to her, in my tent-like black skirts and tight ponytail. I worried that it was my fault, that my sins sent her reeling away from the holy path.

We moved on, each of us marrying black-hatted men, I at 19 and she a couple of years later. I didn’t hear from her, and I didn’t reach out. The last thing I wanted was to be responsible for either of us sinning again. I dutifully gave birth to two children. I undutifully got a college degree and a divorce. I flirted with the idea of dating women, but then I was warned, by several religious mentors, that if I deviated from my faith, I may very well lose custody of my children.

Instead, I married another Jewish man who loved my children almost as much as he loved me. I was in the process of trying to figure out why I couldn’t seem to love him back, not in the way that he deserved, when Hannah’s friend request popped up on my iPhone screen.

I had words for it by then, from my years in college and in clinical practice, words I did not want to admit applied to me. However, I was starting to realize that despite my best efforts, I had failed to pray my gay away. I got divorced again, when it became too painful to keep lying to myself and hurting the people closest to me.

Hannah followed my posts about moving out of my Orthodox neighborhood and into Manhattan, sending little thumbs-up emojis. Then, there were pictures that got leaked of me kissing a woman with a flawless barber fade. Almost everyone I knew was shocked. Horrified. When Hannah saw them, she sent a voice message congratulating me, sounding totally unsurprised. “I’m so happy for you,” she said. “You look great.”

Throughout the pandemic, I noticed her photos started to shift, the head coverage slowly fading. There was some cycling through new names. I knew what that was like: breaking down an old life and finding the strength to start over. We texted and finally set up a time to meet.

Twenty years after our high school graduation (and with me married again, this time to a woman), I stood outside the Upper East Side’s Hummus Kitchen, scanning every person on the street. Was she the woman in sweatpants and a hoodie? The one in a sharp blazer and Chanel handbag? I should not have stressed. As soon as I saw Hannah, fringes waving off her arms, smile bright under the city lights, I knew.

“Tell me everything,” she said, hugging me.

We segued from my stories, to hers, to ours. Despite being a full-fledged grown-up who talks about complex emotions for a living, I heard myself stutter as I asked, “Remember — we hooked up?” The only words I could conjure to ask a question so much greater than that. If we played our most haunting duet in a closet, with no one around to hear it, did it even happen?

She paused, hand around her glass of rosé. “Yeah,” she said, in her 15-year-old Hannah drawl.

I gulped my own wine down in relief. It happened.

As the restaurant lights dimmed and a small candle appeared on our table, we started asking each other the questions we had been holding for decades.

Her: “Why were you always leaving without saying goodbye?”

We never asked the biggest one: What could we have been, if we had been raised to believe that love is never a sin?

Sara Glass, a psychotherapist in New York City, is working on a memoir about the conflicting experiences of her queer identity and Hasidic upbringing.

Modern Love can be reached at [email protected].

Want more from Modern Love? Watch the TV series; sign up for the newsletter; or listen to the podcast on iTunes, Spotify or Google Play. We also have swag at the NYT Store and two books, “Modern Love: True Stories of Love, Loss, and Redemption” and “Tiny Love Stories: True Tales of Love in 100 Words or Less.”

Kelly Rowland Wants You to Dress Up at Home