Six months into his bid for the presidency, Joseph R. Biden Jr. made his position on pets abundantly clear.

In January, when President-elect Biden moves into the White House, a bit of normalcy will be restored to the nation’s highest office: He and his wife, Dr. Jill Biden, are expected to be joined by their two German shepherds, Champ, 12, and Major, 2.

The news has been applauded by dog owners and especially those who support animal adoption over commercial breeding. A decade after purchasing Champ from a breeder in Pennsylvania, a move criticized by some animal rights organizations, the Bidens adopted Major in 2018 through the Delaware Humane Association; he will make history in January as the first shelter dog to take up residence in the White House.

Several animal welfare agencies posted about the news, including the Delaware Humane Association, which captioned a photo of Major: “First Dog Elect.”

Patrick Carroll, the executive director of the Delaware Humane Association, said that Major “shows the real possibilities for what could happen for all the great dogs who need homes out there.”

Mr. Carroll, 54, recalled the day Mr. Biden adopted Major in 2018. He said that the former vice president was nominally in a hurry, but that he ended up sticking around the shelter for more than an hour, telling stories and taking selfies with staffers. “He was very kind and engaging, as he always his,” he said.

Across social media, dog lovers shared their excitement about the return of pets to the White House. WeRateDogs, the internet’s definitive source for canine reviews, said of the soon-to-be first dogs: “Both 14/10 would be an honor to pet.”

Matt Nelson, 24, the creator of WeRateDogs — which reviews pooches by photo submission — said that the Biden campaign had provided photos for the post about Champ and Major. “It kind of was a submission, but it wasn’t like Joe Biden was in our DMs,” he said.

Posts from pet enthusiasts continued to appear well into Monday. Somewhere along the way, an image of Mr. Biden with Major got Photoshopped such that the German shepherd appeared, plainly, huge. “Guys, Major Biden is a big dog,” Jane C. Timm, a reporter and fact checker for NBC News, tweeted. “He is not THAT big.”

The tradition of presidential pet ownership dates back to George Washington and has been carried on by 30 of the 45 presidents. Mr. Trump was the first president in more than a century without such a companion, a fact that critics (and supporters) seized on at several points over the last four years, noting the potential for a pet to benefit one’s health and image.

Rob Schwartz, the C.E.O. of the agency TBWA/Chiat/Day New York and a creator of the ad, said that the idea came to him after a consultative call with the Biden campaign about their messaging. Independent from the campaign and his agency, he wanted to hammer home the common ground Mr. Biden shared with much of the electorate.

Mr. Schwartz, 55, found that nearly 70 percent of American homes include dogs and hoped that his ad would appeal to both the undecided voter and the “gun-toting red stater.” (At the very least, it won over the Republicans at the Lincoln Project.)

Mr. Carroll, of the Delaware Humane Association, said that despite notions about the bipartisanship dogs can inspire, the announcement of the new White House dogs has drawn scrutiny. “We did a simple post on our Facebook page, and we’ve gotten some very negative comments,” he said. “We recognize that the country is very divided.”

At the same time, “the power of dogs on the internet is recognized by everyone,” Mr. Nelson, of WeRateDogs, said. With the rise of the web and social media, presidential pets have produced goofy and occasionally viral imagery, and become stars in their own right. In 2002, President Bush cast his Scottish terrier Barney as the star of what would become an annual White House Christmas video. President Obama’s Portuguese water dog Bo featured prominently in his second campaign.

“People look at a whole constellation of attributes when they vote for president,” Mark McKinnon, a Bush campaign adviser, told The Washington Post in 2012. “Pet lover may not be high on the list, but it’s on the list.”

Still, President Trump has been dismissive of the idea that he should have a pet. “How would I look walking a dog on the White House lawn?” he told his supporters at a rally in El Paso in 2019. He has also frequently treated the word “dog” as a slur, using it to disparage women for their looks and eligibility as partners, and men for their weakness.

During his campaign, Mr. Biden and his team made direct appeals to pet lovers with merch (like a “No Meowlarkey” cat collar) and social media posts insistent on the importance of presidential pets.

Meanwhile, at RepublicanDogs.com, there are some deep discounts on Trump bandannas.

Jerry Lorenzo Takes the Next Step Towards His Fashion Revolution 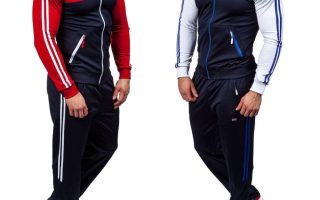 5 Legit Ways To Look Good In A Tracksuit