The Sneaker Hall Of Fame is FashionBeans’ compendium of the most iconic trainer designs of all time. From the Common Projects Achilles Low to the Nike Air Force One, these are the kicks that have changed the course of footwear history.

There are classics in the world of sneakers. Go-tos. Favourites. Timeless essentials. The type of shoes that have earned their stripes over the course of decades and continue to fly off shelves today. It’s difficult to imagine a higher tier of footwear fame, but there’s one sneaker that has achieved it: the Converse Chuck Taylor All Star.

The All Star is much more than a hero of your shoe cupboard – it’s footwear rightly celebrated as a design classic, and all the more so because it’s so accessible. According to stats from Footasylum, over 60 per cent of Americans have bought at least one pair – more than any other sneaker in history.

It shouldn’t come as much of a surprise, though. After all, this is a trainer that, over the course of the last century, almost single-handedly created a sneaker market and continues to dominate it to this day. It’s an omnipresent icon of popular culture, a sporting staple and a masterpiece of utilitarian design all rolled into one. Not bad for what is essentially just a bit of rubber and canvas.

Here we delve into the details behind the most popular sneaker of all time. Including its history, why we love it and how you can incorporate it into your day-to-day wardrobe.

History Of The Converse Chuck Taylor All Star

Unlike most sneakers, the Chuck Taylor All Star’s history stretches all the way back to 1908, when Marquis Mills Converse founded the Converse Rubber Shoe Company in Malden, Massachusetts. 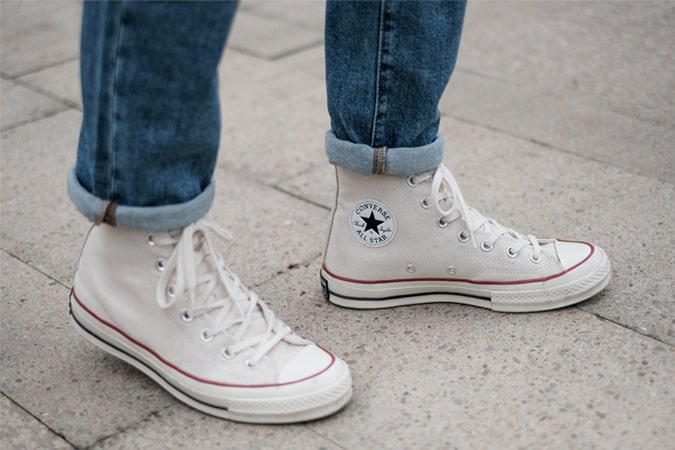 Nine years down the line, the company designed a basketball shoe, marketing it under the name, “Non-Skids”. This simple canvas sneaker was to be the forerunner to a footwear phenomena that would sweep the world for decades to come.

It 1921 things really took off for Converse, when a young, semi-pro basketball player by the name of Chuck Taylor joined the company as a salesman. Taylor had a lot of ideas concerning improvements that could be made to Converse’s basketball shoe, and within a year of him starting, they’d all been implemented.

Increased flexibility and ankle support, a stylistic makeover and the addition of a star-shaped patch to the inner ankle, bearing the signature of the man himself, making it the first ever sportsman-endorsed athletic shoe. Today, the Chuck Taylor All Star is fashion icon. At last count, over 550,000,000 pairs of these simple basketball shoes had been made and sold around the world – a number that continues to grow year on year.

What Makes The Chuck Taylor All Star Great?

The monumental success of this unassuming sneaker is its simplicity. 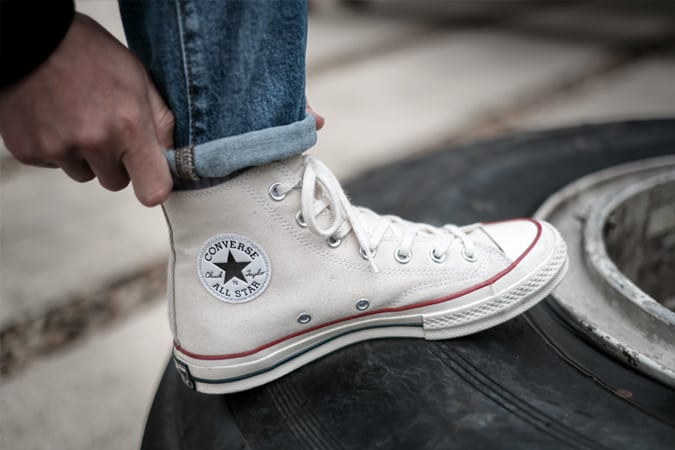 The Converse Chuck Taylor All Star is the definition of good design, in that it solved a problem in as straightforward and elegant a manner as was possible. So much so, in fact that it has remained relatively unchanged to this day.

Its beauty lies in the fact that it’s not bursting at the seams with cutting edge technology, or futuristic materials. It simply does what it says on the tin, and a damn sight better and more stylishly than any of its competitors and at a price that mocks many of today’s most hyped new drops.

How To Wear The Chuck Taylor All Star

Perhaps the greatest feature of the All Star is its versatility. It’s a Swiss Army knife of a shoe that can be worn with any casual outfit you could care to think of, or a suit for the right occasion. A myriad of colour variations only add to the number of ways in which it can be styled. We could go on forever listing every possible way to wear a pair of these timeless essentials, but in true All Star spirit, the best thing is to just keep it simple.

For a reliable, casual outfit, team white, high-top All Stars with slim-fitting, cuffed denim. On top, layer a light jacket over a well-fitting, plain white tee and tie things together with a baseball cap or beanie. The Uneasy Afterlife of Our Dazzling Trash

The Ceramics Obsession Has Moved to Our Walls