Blue might not be the warmest colour but, when it comes to watch dials, it certainly is the most popular. The first wave came back in 2015, when Baselworld seemed awash with the aquatic hue but now what was once something a little avant garde has become a staple in every brand’s collection. And it’s not surprising.

Blue watches are more directional than black or white but not as out there as green or orange. They also run the gamut from dress to out-of-office.

“Whether it be a suit, pair of jeans, socks or slip-on Vans, the colour blue seems to work for every occasion and blue dialled watches are no exception,” says Simon Spiteri, a buyer for men’s style site Mr Porter. “It’s the seamless way a blue dial can be paired with an outfit, formal or casual, or engulfed by a steel or yellow gold case – blue gives the perfect sense of laidback elegance.”

If you’d like some of that laidback elegance in your life then here are ten blue watches worth wearing.

With its overlapping and differently sized dials, there is more than a whiff of Jaquet Droz’s Grande Seconde about this watch, except you’d be paying substantially more for that and not getting a second time zone into the bargain.

For those of us who are never sure which dial is home and which is travel time, there’s a helpful reminder underneath each one, while the globe in relief gives the all-blue look a little lift. It looks great, is on trend and a bargain – what more could you want? He’s gone from doing dubious things with DLC to Rolexes to becoming the spec darling of TAG Heuer, Zenith and Bulgari, but George Bamford still finds the time to develop his eponymous range of watches.

What started life as a service watch that was so popular people wanted to buy it has morphed into a comprehensive collection that now includes this vibrantly hued sporty little number. The case is polymer, the strap is rubber and it’s good to 100m. In short, it’s the perfect poolside companion. When it comes to brands in the Swatch Group stable that offer amazing but affordable watches, the two names that usually trip off the tongue are Tissot and Hamilton, but you should never forget about Certina.

This retro rugged weekender is most notable, aside from looking great, for being powered by the revolutionary Powermatic 80. First debuted by Tissot it features a high-tech escapement with no regulator, whose rate is set by laser rather than by hand. Eighty hours’ power reserve is normally the preserve of higher-end names, but this is all yours for just a tad over a monkey. 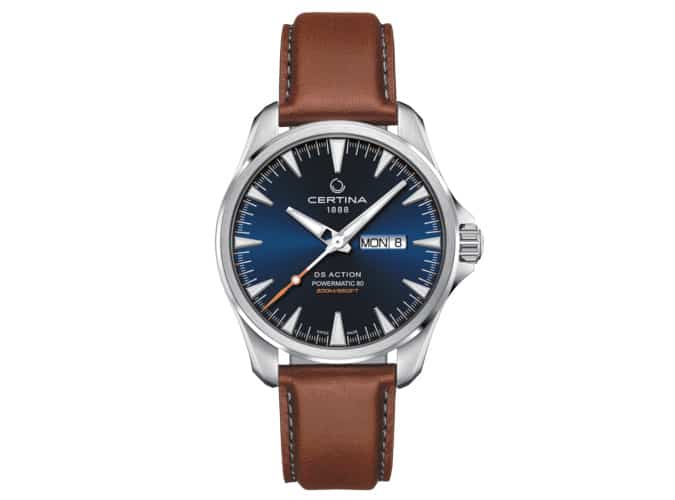 Blue dials really lend themselves to a dress scenario. Less severe than black, not quite so ‘look at me’ as green or orange, it is subtly elegant as this Hamilton proves. While the oversized day window at 12 o’clock might divide opinion, the rest of this watch is a classic, no nonsense, refined design that will easily take you from desk to dining out.

If the outside looks good, then the insides are (almost) better because, despite the price, this is powered by the H-40 movement, which has a substantial 80 hours of power reserve, meaning it will last the whole weekend, even if you can’t. Despite founder Jean Depéry having an over 200 year-long stake in the watch industry, Emile Chouriet is probably not that familiar a name. Christened in homage to an 18th century watchmaker to whom Depéry’s ancestors supplied components, the brand has made its name making elegant dress style designs, all of which were a far cry from this tool watch.

Despite being inspired by mountaineering, Emile Chouriet has not lost the refinement for which it is renowned, which makes this a watch with all the attributes of a weekend wearer but with enough of its rough edges polished off to make it acceptable during the working week too. A little bit sporty, a bit vintage, somewhat modern; there are so many design elements incorporated into the Oris Big Crown Pointer Date that it shouldn’t work but it does and in spades.

As it spends time on your wrist, what makes you fall for it is the slow appreciation of its myriad discerning details – the bronze fluting on the bezel that’s mirrored in the hands; the dark Stiffkey blue (one for you Farrow & Ball fans) of the dial; the mid-century inspired typeface and the pointer means that there’s no date to disturb the dial symmetry. Watch design doesn’t get much better than this. 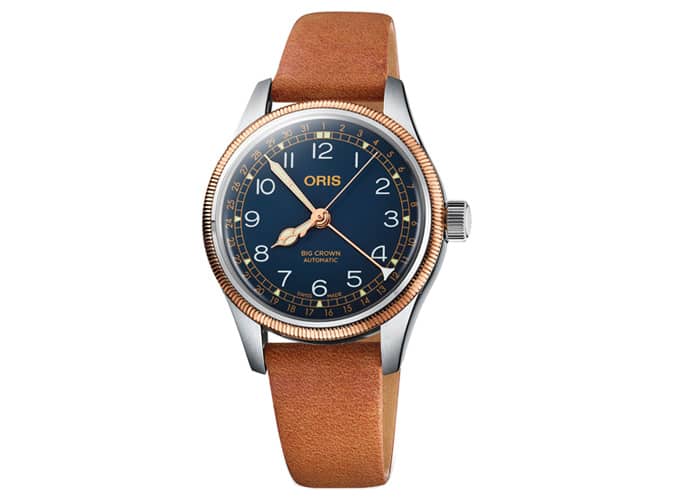 It is the only blue dial 007 will deign to wear, which pretty much makes it the mic-drop watch of this particular round-up. Aside from the Secret Service affiliation, the Omega Seamaster is an absolute classic.

Modelled on the water-resistant watches Omega made for, and which were worn by, the British military during World War II, its chunky bezel and wave-etched dial are instantly recognisable. And now Daniel Craig has been filmed wearing it with a dinner suit, you don’t need to leave it at home when the invitation says, ‘black tie‘. 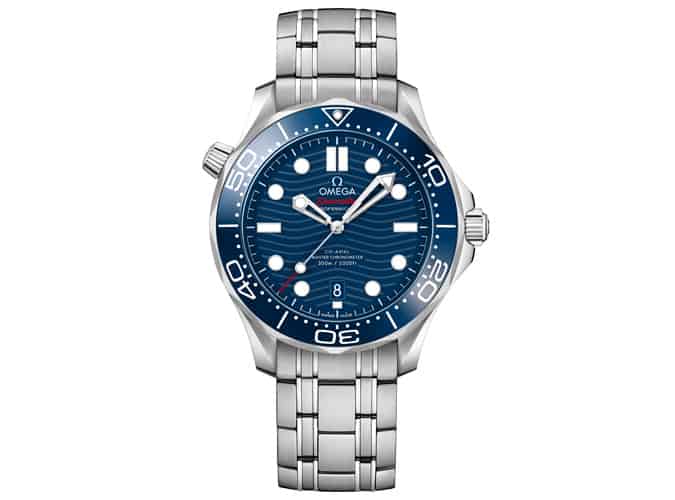 Designed by then-head honcho Jack Heuer and named after the Formula One race, the Monaco was also the first automatic self-winding, and square, chronograph.

Originally powered by the now-legendary Calibre 11, it also gained fame by becoming the wrist companion of one Steve McQueen in the 1971 film Le Mans. There have been Gulf livery options, re-editions and one with two faces and two movements – one quartz, one mechanical– but this “blue with white sub dials” version is the quintessential design.

In a world of predominantly round watches, the TAG Heuer Monaco effortlessly proves why it is hip to be square. Breitling Navitimer B01 Chronograph 43 Pan Am

There is something about this Breitling Pan Am that harks back to an era when air travel was glamorous and every woman on board wanted to have a fling with the pilot.

It’s all there in the flirtatious red flashes on the dial, the ruggedness of the brown leather strap and the power provided by the super accurate in-house Breitling 01 calibre with 70 hours of power reserve, which means you’ll be on time for every assignation. When Vacheron Constantin launched the FiftySix last year, it was the equivalent of Tom Ford turning up on a red carpet in jeans and deck shoes; a total loosening of the proverbial horological design collar.

From the bold mid-century numerals to the stainless-steel case, this was a younger “get the craft beers in” iteration of this venerable house. This year it has upped the sartorial ante by introducing a blue-dial collection to the range. Specifically called petrol blue and, according to Vacheron, the shade that resulted from a personal challenge to find the perfect interpretation of this shade, it adds an extra layer of sass to this already seductive watch. The Best Wireless Headphones for Working Out

Karla Welch Gets Personal For Second Collaboration With Dockers