Getting through life in the right shoes is tricky business. One minute you’re caught battering a piñata at your kid’s birthday BBQ wearing a pair of dress shoes, the next you’re inexplicably slumming it in espadrilles at Friday’s weekly sales meeting.

The tricksiest dress code in footwear is business casual. Smarter than smart-casual, but less buttoned-up than all-out business, it’s a tough one to define. “Business casual is that treacherous middle ground where you are trying to achieve two things, smart yet relaxed,” says Tim Little, owner and creative director of Grenson.

This could mean softly tailored suits with white tees slipped underneath or a knitted polo sitting resplendent on top of some stone-coloured chinos. But all that hard work nailing the dress code upstairs can be undone by not picking out the best business-casual shoes below.

“A good business casual shoe can be one of two things,” says Little. “A casual version of a business shoe or a smart version of a casual shoe. The first route, for example, could be a classic brogue but with a casual twist such as a chunky wedge sole, or in a coloured suede. Whereas the second route could be a sneaker but in a luxury smart leather.”

Here we guide you through the best styles of business casual shoe out there, from chunky chukka boots to precious penny loafers, so you’ll never again be caught out in the wrong work shoes again.

The Derby shoe is the more relaxed, laid-back cousin of that businesswear mainstay, the Oxford. It all comes down to the laces, with the space between the eyelets sewn shut in the ‘closed system’ on a pair of Oxfords, while they flap open when the laces are undone with the Derby. A subtle difference, sure, but one that makes all the difference. Relax the style further with a suede finish to take the edge off the polished leather.

“This is a very clean style with no punching so the suede will be on full show,” says Little. “Make sure the suede looks good quality and the nap isn’t too ‘hairy’ otherwise the shoe will look scruffy very quickly.” The Derby’s simplicity makes it a versatile shoe, so the most important thing is matching your colours correctly, not your trouser style. Bright shades outside the neutral three will pop against black trousers, while brown versions look good with chinos as long as one shade is darker than the other. Sneakers have smartened up substantially over the last decade, and have slowly crept off the tennis court and into the office. But just as you wouldn’t waltz into work like a walking billboard wearing big-logo sweats, your sneakers should be pretty sober, too. Despite their rise up the dress codes, even the most minimalist sneakers lean towards the casual end of business casual. Swerve the tie, then, and wear them in a laid-back modern take on tailoring with a white tee or polo subbing for your shirt.

If you’re looking to dress down further, a mocha pair of minimalist sneakers will work wonders when tonally paired with some stone-coloured chinos. When it comes to different types of shoes, few styles show you mean business like a pair of brogues. You can spot a brogue by the ornamental patterns perforating and lining the leather of the shoe. Despite such over-wrought fanciness, the brogue is an ever-popular shoe around the office, possibly owing to its eye-catching ability while simultaneously keeping your look smart.

Add a contrasting rubber sole and you’ve got comfort and just enough smartness for the modern workplace – a casual sneaker sitting feet-up on the desk, while the brogue on top makes all the business deals. Brogues are most usually seen in brown leather so the perforations are more visible than they would be with black. These shades of brown look great with indigo denim, especially more decorative styles that bring down the formality of the shoe. Don’t attempt to stick them to black denim though, that’s a minefield not worth traipsing over. This is the favoured shoe of preppy style icon and Hollywood’s resident silver fox, Jeff Goldblum. The penny loafer differs from other loafers by the strip of leather that sits pretty across the front with a diamond cut-out detail.

“Penny Loafers are all about fit,” says Little. “It should barely slip at the back when you walk, but it shouldn’t be too tight across the instep. If you aren’t sure, walk away.” Polished leather versions are the perfect punctuation to tailored looks while suede should be reserved for spring and summer. For the latter go with a rich blue pair and wear alongside a wide-leg pair of linen trousers for a look that’ll make you the toast of the super-yacht harbour. An extension of the straight-laced Oxford shoe, the boot is the same in shape and design with limited stitching except across the toe cap and sometimes running horizontally to the eyelets.

The Oxford boot does have the added bonus of more leather to cover up your mankles though, which makes them a harder wearing alternative in winter months as well as a more casual get-up that can work with jeans when the Oxford shoe would look out of place. “Perfectly versatile, the Oxford boot gives you the option of dressing up or down,” says Bhuller. “Look for heavy round toe shapes for up to date styling”. Wear with an equally hard-wearing pair of wool trousers for the perfect battle armour during the brisk winter. 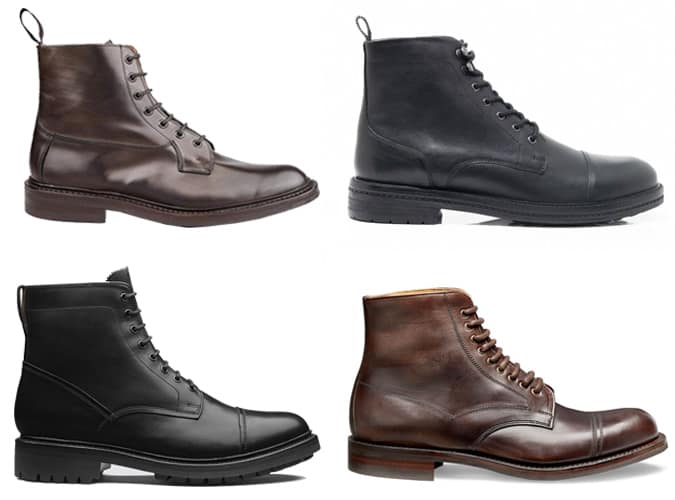 Not so much named after flip-flopping British politicians as a passage of play in a game of polo, the chukka boot was thought to have come from the boots worn by players but hit the ground running when legendary style icon the Duke of Windsor wore a pair on a trip to the US in 1924.

A near-hundred years later and here we are still wearing the hardwearing, low-key boot. The main ingredients include three pieces of leather tied up by two or three eyelets. Sometimes interchangeably called the desert boot, the main difference between the two is the spongy crepe sole that comes with the desert, but not all chukkas. “Any boots like the chukka which come up to ankle height are best worn with turned-up hems,” says Bhuller. Look to have the hem come to an inch above the top of your chukka so there is a clear and crisp separation between the two.

Colour and fabric make a big difference in where the boot lands on the dress code scale. Black, polished leather versions are distinctly formal and will naturally work with suit trousers while brown, suede options are more casual and land well with a pair of mid-wash denim. So-called because they found their popularity among the well-heeled party scene that sprung out of the west London borough in the 1960s, Chelsea boots are the quintessential business casual boot.

“The best Chelsea boots have a beautiful soft curve from the top down to the toe,” says Little. “If it creases heavily across the instep when you put it on, it hasn’t been blocked or pre-shaped and is probably made from cheaper leather.” Slim jeans that run into the curvature of the Chelsea boot will offer a slick, unparalleled silhouette that goes some way to explain their unwavering popularity. Get away with some subtle rocker vibes in the office by pairing your Chelsea boots with some black skinnies and a white Oxford button-down shirt. Thank goodness it was the shoes we took from the monks and not the hard-to-pull-off hairstyle. First created as an adaptation of the sandal for when holy men needed a closed toe to protect their tootsies during manual labour, the shoe has the casual nature of a slip-on with the pointed toe and polished leather leaning it towards the business side of things.

Pluck for a clean single strap if you have a formal meeting, leaving the double to be cracked out for weddings and parties when you need to make more of a statement. “Monk strap shoes have the versatility to go from traditional to trending by simply changing an outfit,” says Bhuller. A firm part of the Pitti peacock’s wardrobe, they work better with tailored looks than jeans, where the dandy buckle and pointed toe can sometimes jar with laid-back denim. Linen Trousers: Why You Need Some, How To Wear Them

I Tried on 23 Pairs of Tights, and This One Brand Is Clearly the Best