Whether temperatures are dipping below freezing, or spiking so high you think your bed might need its own air conditioner, you want the most breathable, all-around best down comforter that money can buy. Why should any night’s sleep take place in anything less than the luxury of a fluffy cumulus cloud? Once you’ve upgraded your mattress and sheets, a comforter or duvet or duvet insert is the next essential piece of bedding you need to make your bed the kind of place you can stay in all-day long (whether or not you agree that top sheets are a scam). And once you’ve got a great comforter in place, you’re just a fiddle leaf fig, discreet rolled up yoga mat, and a cuddly dog short of Instagram-ready breakfast in bed.

First, let’s spend just a moment on some important textile-world jargon: What is the difference between a comforter and a duvet? Both are thick, fluffy blankets. A duvet insert is intended to be used with a separate duvet cover, which you can wash separately and swap out. A comforter is basically a duvet insert with the cover sewn on. This makes comforters a bit harder to clean. Cleaning a duvet cover is as easy as tossing a top sheet in the washer. And, if you no longer like the color, print, or pattern on your cover, you can just swap it, instead of having to replace the entire comforter.

The best comforters and duvets check several boxes: superior hand-feel, ample warmth, satisfying fluffiness (described as “loft” in industry-speak and often measured by “fill weight” or “fill power”), and adequate breathability. In order to figure out the right combination of these elements—to triangulate your ideal fluffiness-breathability-warmth ratio—you’ll first want to consider if you’re a hot sleeper, if you’re allergic to down feathers, and, of course, how much you’re willing to spend. There are two key metrics when it comes to duvets that affect almost all of these factors (and are generally indicative of the price): fill power and thread count. Fill power is a measurement of the quality of the down, and represents how high the down will loft—essentially, how high it puffs up. Higher fill power generally means warmer, puffier, lighter, and longer-lasting down. Thread count measures how tightly woven the shell is. So a higher thread count means less breathability and more heat. High fill power + high thread count = super insulated and warm.

In order to focus the scope of this mission, we first judged a mountain of comforters based on hand-feel: basically, upon first touch, how luxe does the shell material and puffiness feel without a duvet cover? Then, after narrowing down some initial contenders we spent several nights sleeping with each finalist. (Note: duvets were tested alongside a 310 thread count sateen duvet cover; duvet covers typically range from 300-400.) Later, we brought in a bunch more new comforters and sent them out to members of our staff to reevaluate our options.

Be warned, prices on duvets and comforters can get pretty steep. A lot of the best duvets we tested, particularly the ones made with real down, cost more than $300. And you do get what you pay for here: those options often proved to be the ones our testers were the most enthusiastic about. But we did find one option that was around $200 that we are enthusiastic enough about to recommend as a new favorite. On a fundamental level, though, the most important thing about a comforter isn’t price. It’s how badly do you not want to leave your fluffy feather nest when that alarm goes off in the morning? Every type of sleeper is different, but we all just want to feel swaddled. Sheets and pillows and mattresses define the slumber experience on a basic level, but none can match the bliss of diving into a truly luxurious duvet. Below, you’ll find our favorite comforters and duvets.

The Best Comforter for Hot Sleepers 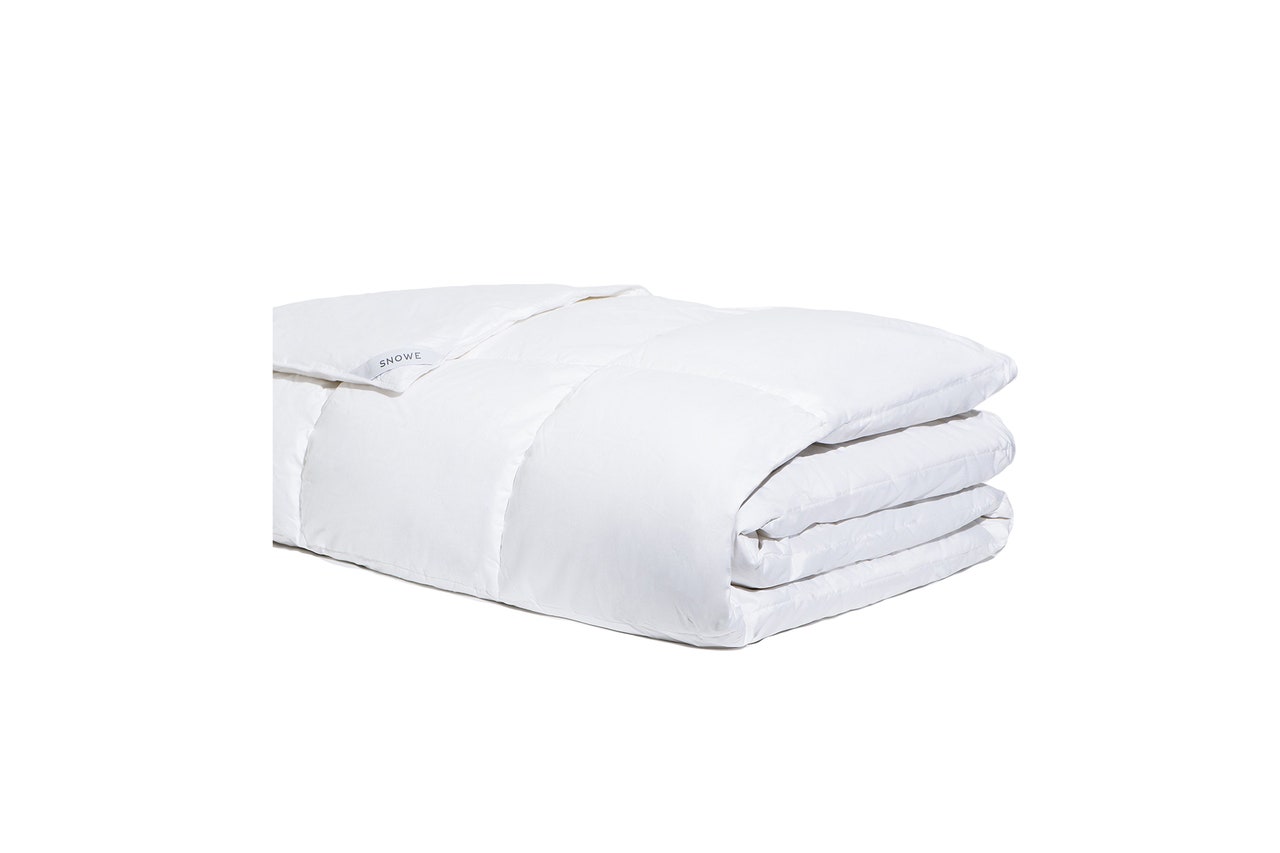 If you’re a hot sleeper or you live in an apartment where you don’t have any control over the heat, then you’re probably looking for maximum plushness and minimal heat retention. This is a tricky balance to strike, but Snowe’s down comforter has nailed it. It has solid loft without too much poofiness, and a good weight that swaddles your frame nicely without making you feel like the Michelin man. You won’t wake up sweating or having kicked the covers off the bed once. 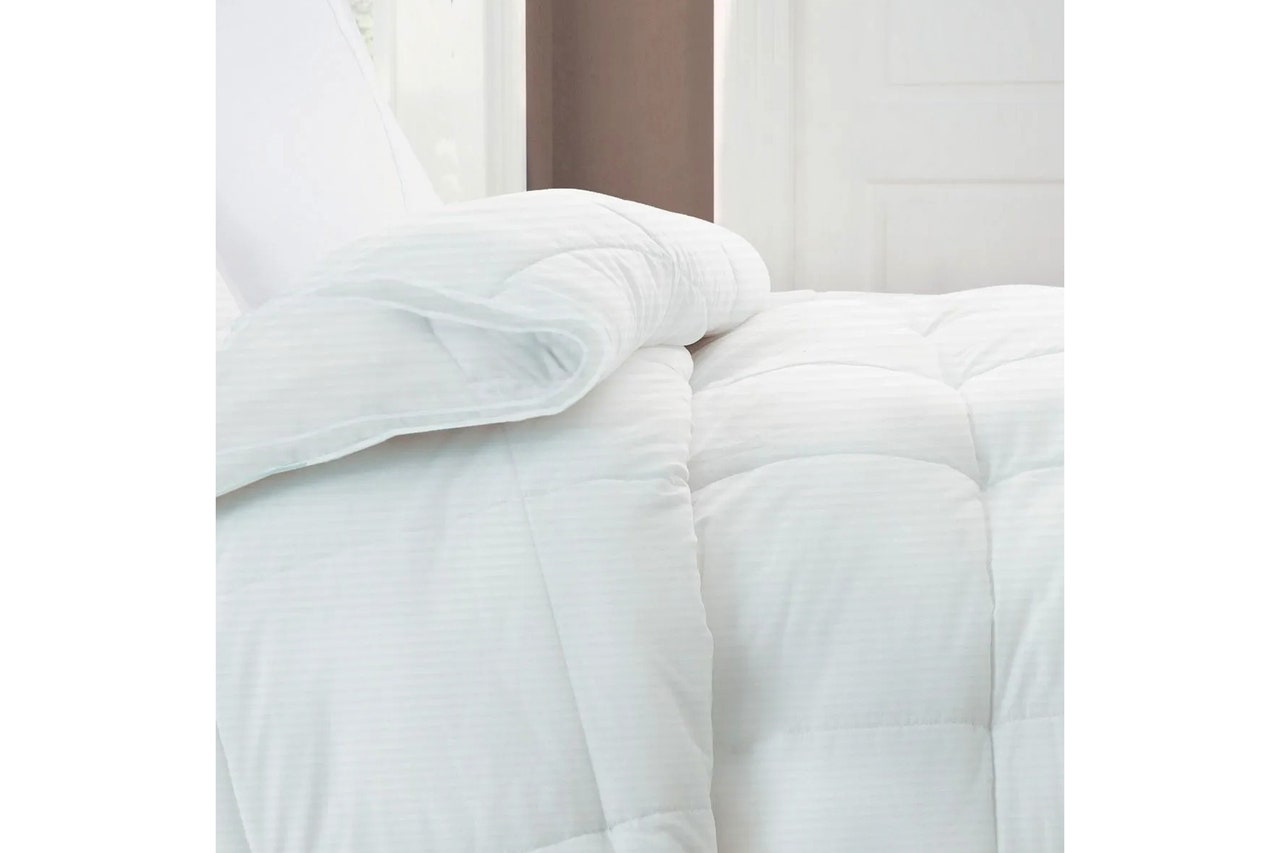 The Riley down comforter in the extra warmth density has an impressive 750 fill power. But what really sets it apart is its loft. This is a thick duvet. So thick in fact that one of our testers compared it to a memory foam mattress. That thickness gives this duvet a weight we generally only see on models that are $50 to $100 more expensive. Sleeping underneath it feels like you’re receiving a gentle hug all night long. If you or your partner tend to sleep cold, the extra warmth comforters from Riley are perfect options. (If you want something a little thinner, but that still has the feel of a premium comforter, we also like Riley’s all-season down comforter.) 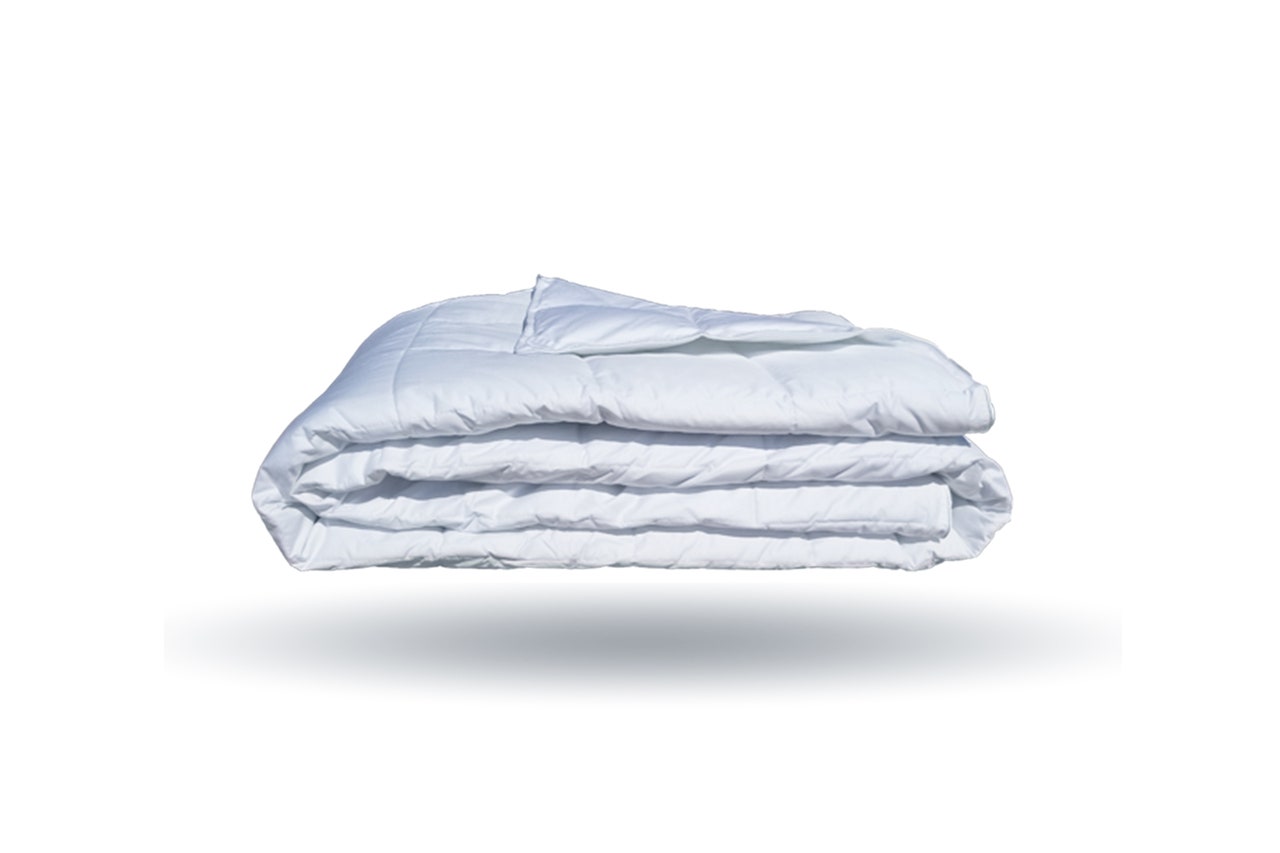 If you want a fluffy comforter on your bed, our two primary picks above are the way to go. They’re both worthwhile investments. But sometimes, an investment doesn’t make any sense. Like, say, if you’re a college student who just needs something to hold them over during those twin bed days. If that’s the case, don’t just buy the first thing you see on Amazon. Get the Slumbercloud Cumulus Comforter. The comforter is thinner than the ones we like from Snowe and Riley, but it’s still a bit thicker than your average blanket. It has more than enough down to keep you warm, but you might want to add some fuzzy pajamas to the mix if you’re a particularly cold sleeper. 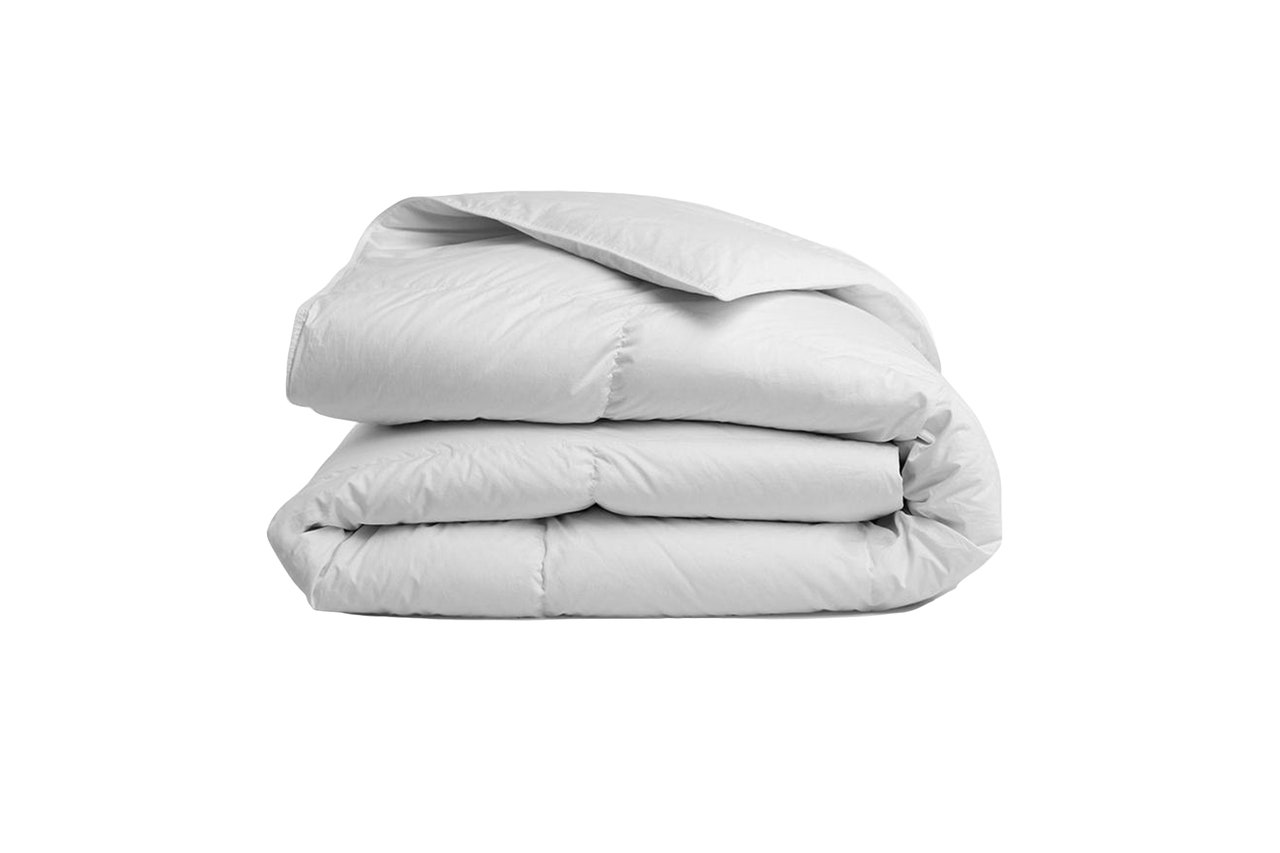 Not all alternative down comforters are created equal. Some have synthetic filling that runs way too hot. Some are weirdly crinkly and loud. The shaved microfiber polyfill of Brooklinen’s down alternative mimics nearly all of the comforts of feathers, including that luxurious hand-feel. The weight-heat-loft ratio is also sublime. At 700 fill power it’s a lovely happy medium for a year-round duvet. 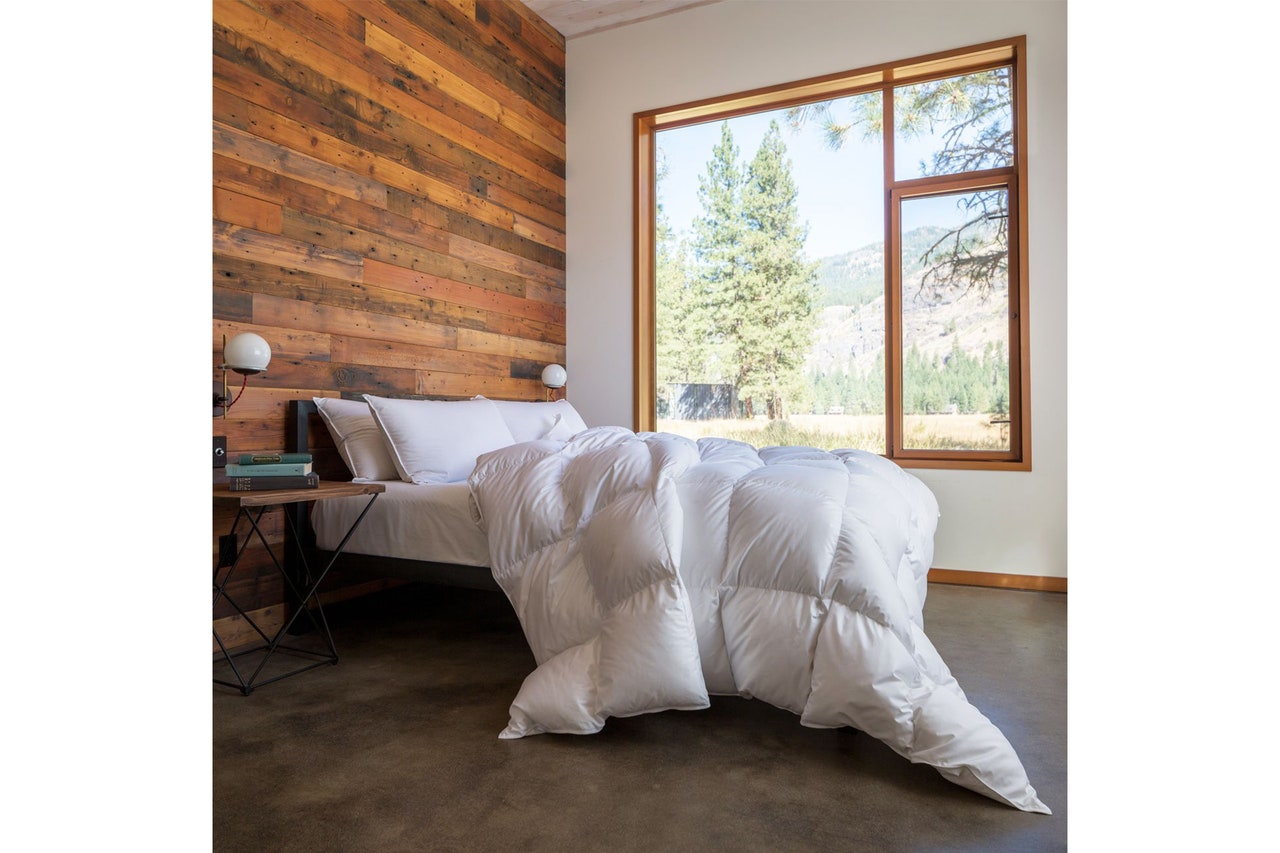 The Feathered Friends comforter in the medium weight has a luxurious hand feel. One of our testers described it as “extremely fluffy, like a gigantic pillow.” (His pup likes it too.) We think the Riley comforter offers a slightly higher value, but if you’re looking for something with a bit more squish, this is a great alternative. 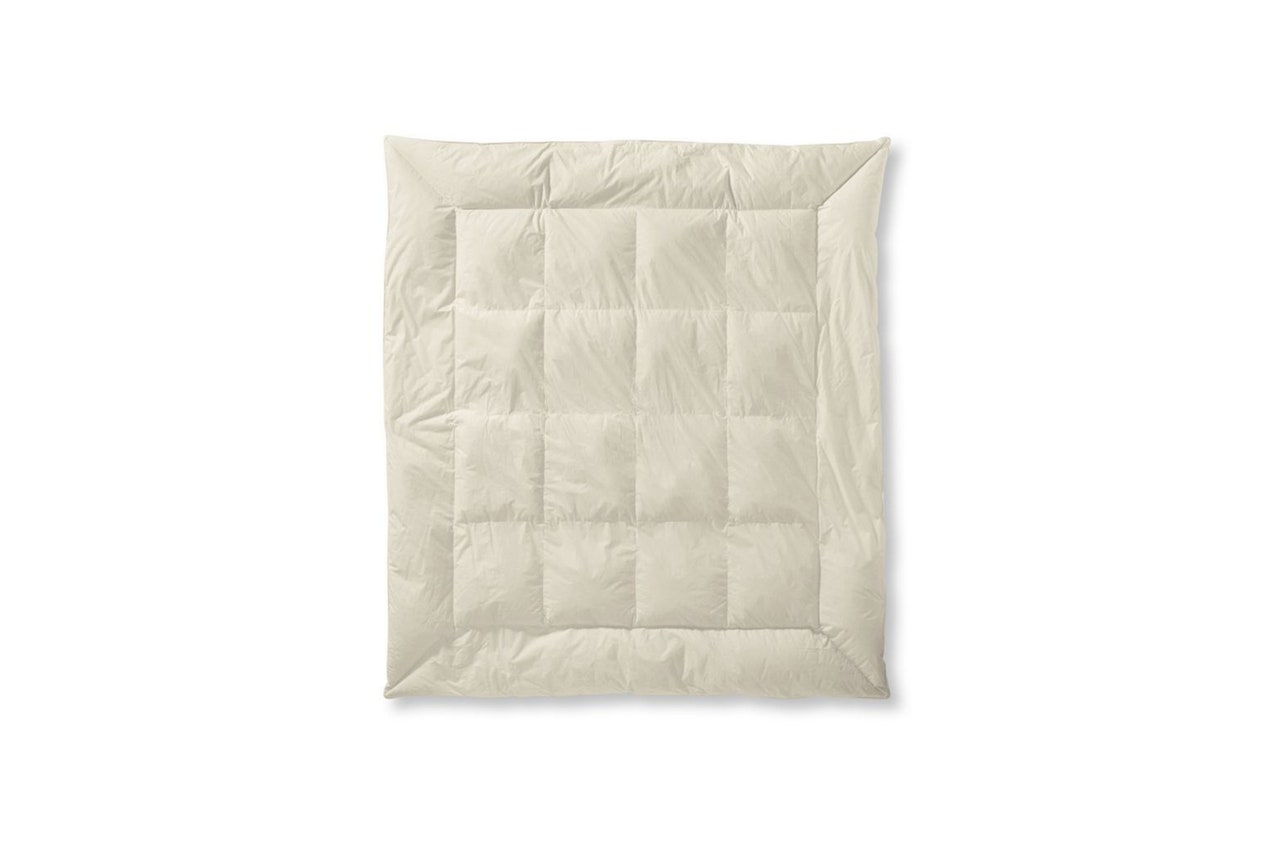 The L.L. Bean permabaffle box down comforter is another alternative for extremely cold sleepers. Our testers found its weight pleasant to sleep under, but you can get something with a higher fill power and similar weight for less money. 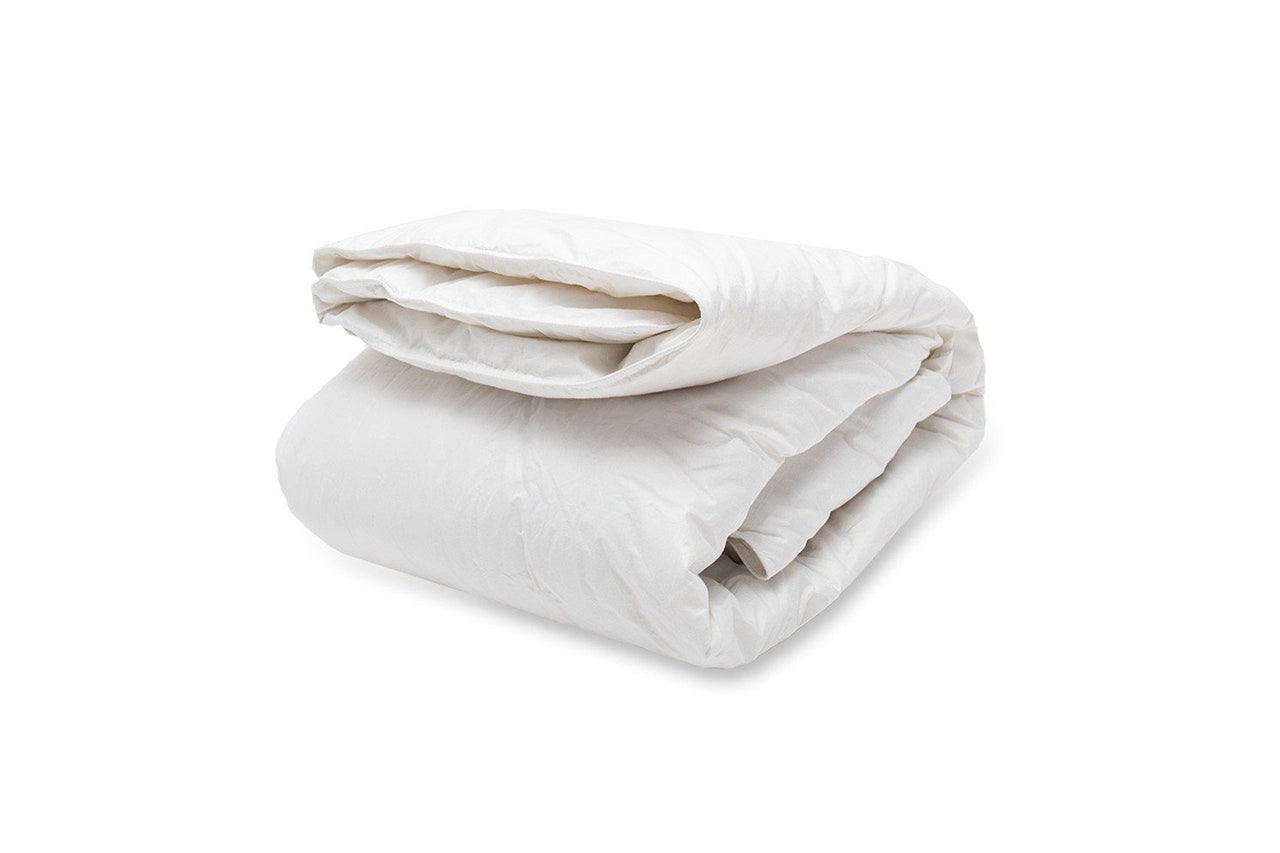 With a slightly lower fill power of 650, but a high 400 thread count, the tightly packed down of this Crane & Canopy comforter maxes out on warmth and weight. A good option if you don’t want to use a duvet cover or top sheet. 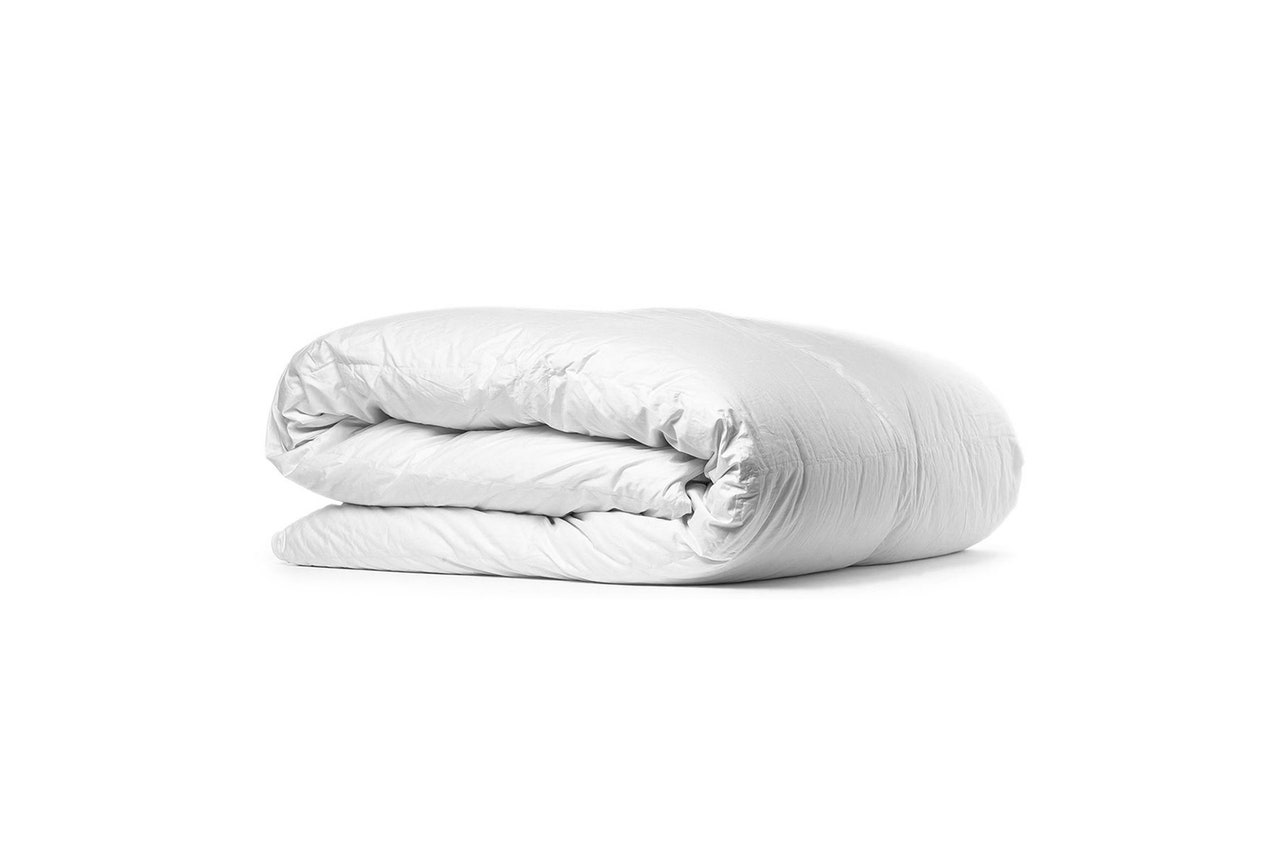 Like the Riley extra warmth duvet, Parachute’s all-season duvet clocks in at 750 fill power, a plushy pouf! We prefer sleeping under the thicker Riley, but if you want something lighter, the Parachute is the way to go. 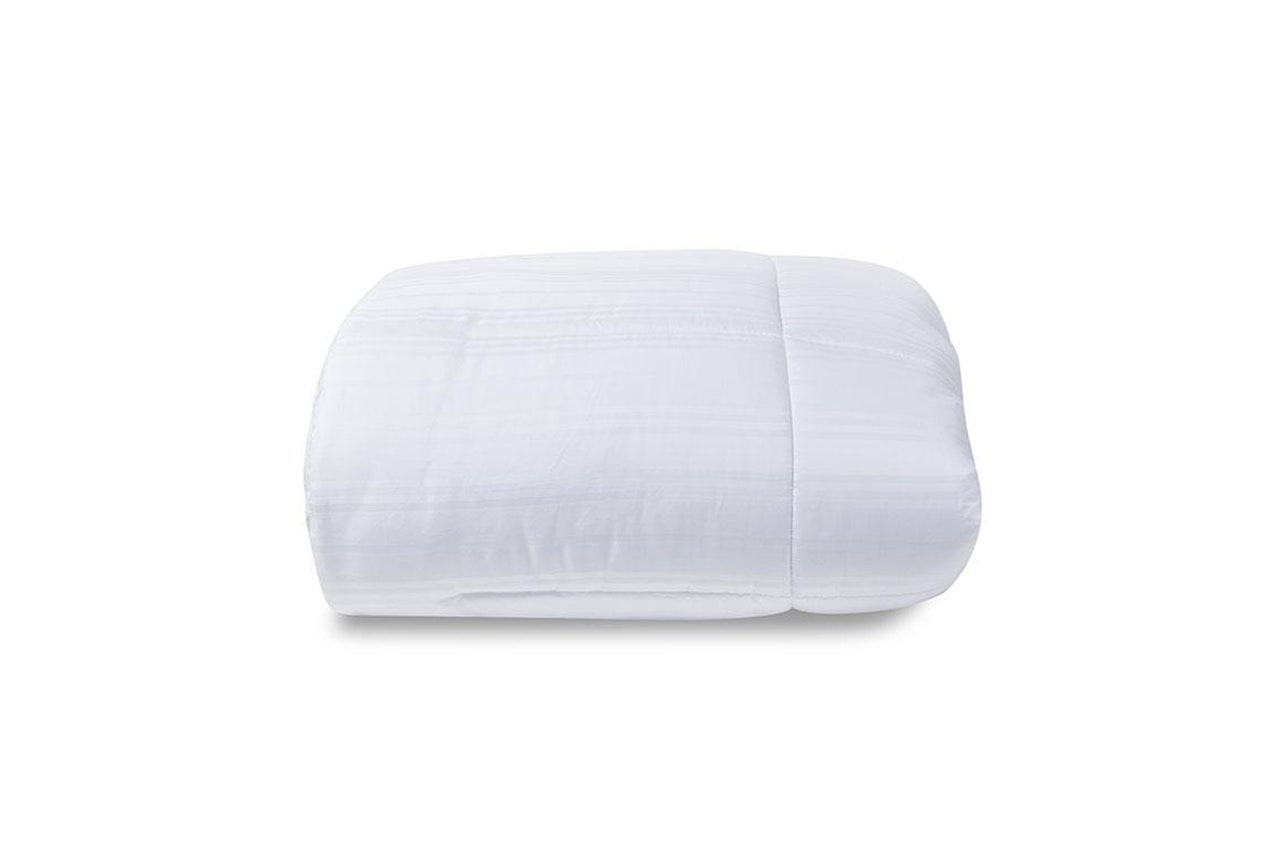 It’s hard to find an affordable comforter that pull-out couch guests will be legitimately grateful for, but this is it. 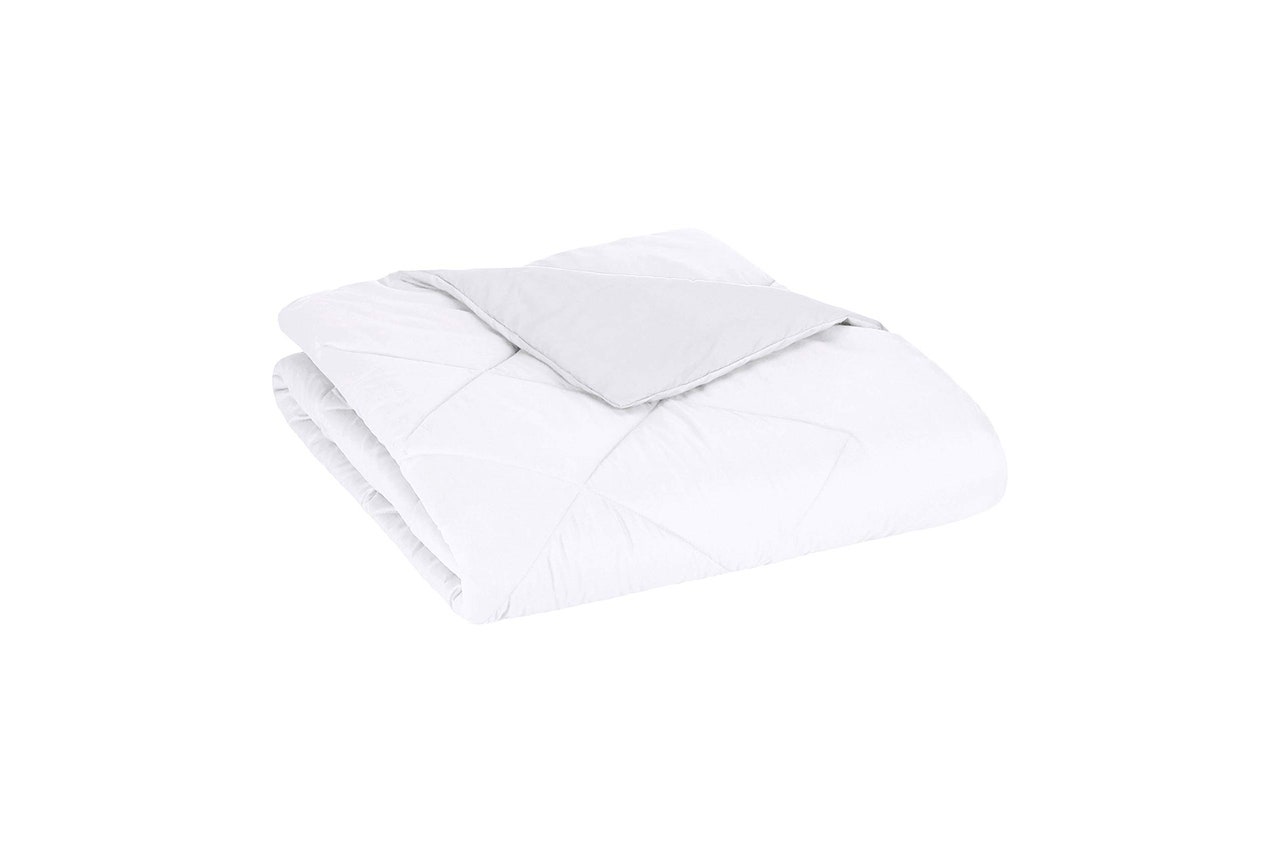 For those slightly-less-welcome guests (like your significant other’s random cousin who somehow visits four times a year), don’t empty your wallet. BONUS: perfect for fort-making when working from home on snow days! 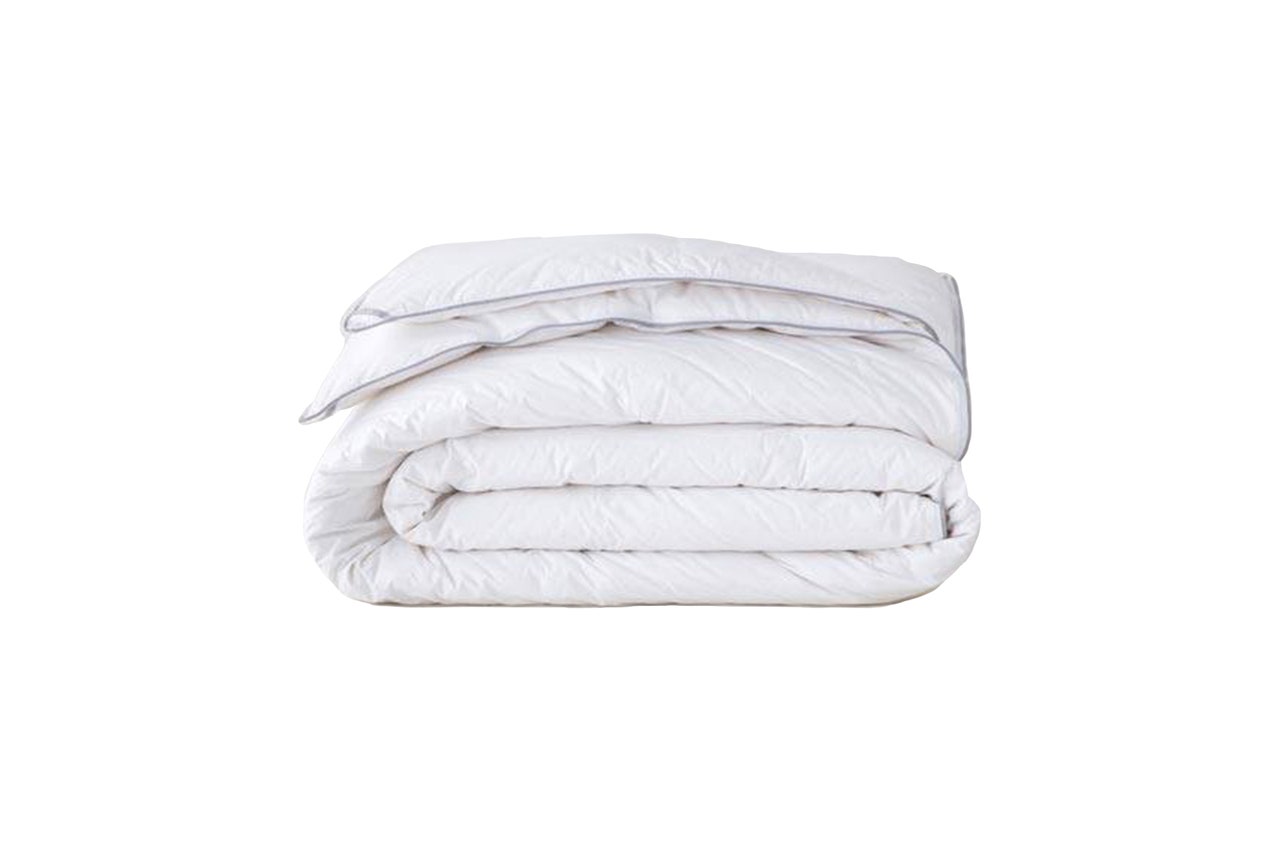 Boasting slightly oversized dimensions to keep the shape inside your duvet cover, this is a solid option for hot sleepers who still want something on the fluffier side. 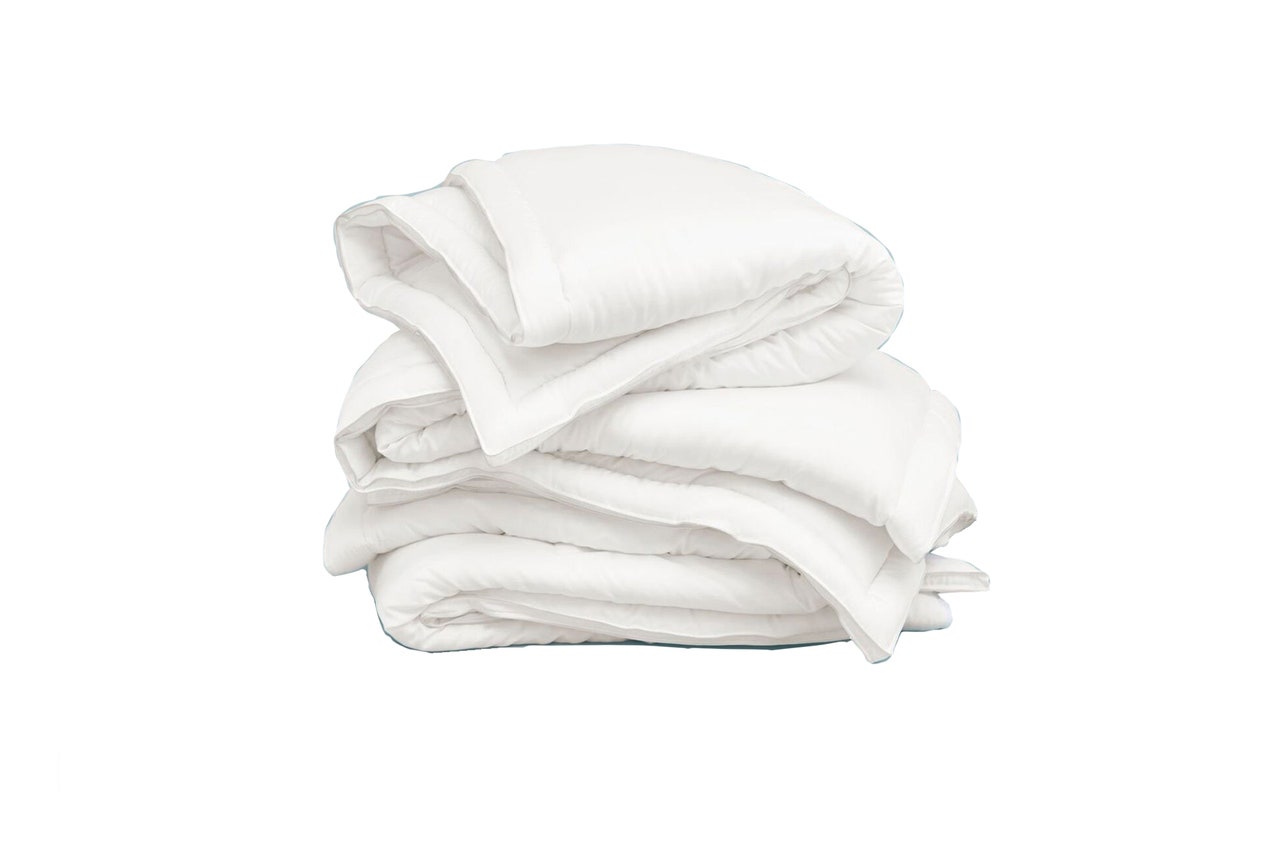 We appreciate that the Buffy comforter is made with a special fill from recycled bottles, but found it to have a scratchy hand feel.

Academy Museum Gives Debbie Reynolds Her Due as a Costume Conservator