Out of the four fashion capitals – Milan, Paris, New York, and London – London is the one most defined by just how many styles it incorporates. From punks to Sloanes, tailoring to streetwear, the city’s look is diverse and dynamic. Which is why it’s about the best place you can go to buy clothes.

To the west, Mayfair is where the suited-and-booted boys hang out, standing imperiously still as they are fitted out for their latest three-piece while you’ll likely catch the streetwear crew waiting in a labyrinthine crew down the alleyways of central Soho. Style becomes a lot more of a melting pot in east London, while British workwear is the catch of the day in the northern boroughs of Bloomsbury and Kings Cross.

Sure it can be confusing, and the lines will always be blurred, as is the London way, but we’ve put our best foot on the ground to trawl you around the must-see streets for menswear in London. Now if only we could get hold of a black cab. No one place in the world is as synonymous with tailoring as Savile Row, with the tall Georgian buildings making for a suitable setting as the city’s power players descend upon the street to kit themselves out with their battle suits.

Many of the tailors have been making bespoke suits on the row since the 19th century, mainstays including the inventor of the modern dinner jacket Henry Poole and H. Huntsman & Sons, the inspiration for Hollywood blockbuster franchise Kingsman.

New kids on the block Richard James and Timothy Everest blew away the cobwebs with more casual silhouettes on their arrival in the 1990s, but all the tailors on the row still hold one thing in common: they treat the making of a suit as an art and a science. If you have the money, there’s nowhere better to get yours. Once you’ve bagged your custom-made suit from Savile Row, head to nearby Jermyn Street to nab yourself the shirt to go with it. Just as Savile Row is a byword for suits, Jermyn Street is where all the capital’s best dress shirts are made, from the historic Turnbull & Asser through to high street crossovers like Thomas Pink and smaller bespoke ateliers like Emma Willis.

Alongside this roll-call of heritage British brands, the street is also home to the St James catwalk show at London Fashion Week Men’s, which brings together over 30 of the brands on the street, including a select few from outside like outerwear heavyweight Aquascutum. The most recent addition to the city’s retail landscape (it opened its doors in 2018), Coal Drops Yard is one part safe haven for some of the best menswear stores in London, one part design marvel. The latter is all thanks to a position as the capital’s official design district, with boutiques built into Victorian brick viaducts with a sweeping metal structure looming large over the space’s courtyard.

Shops wise, minimalist workwear reigns supreme with brands including French clothesmaker and one of the top places to go for raw denim in the world, A.P.C., Scandi brand Rains and indie London label Universal Work all having set up shop in the new centre. Blackhorse Lane Atelier, London’s only craft jeans maker, has also moved in. So-called because of the seven streets that converge around a single column bearing six sundials (a town planning error if ever there was one) Seven Dials carries the same sort of Georgian charm as its hop-skip-and-a-jump away neighbour Covent Garden.

The tourists spill over too, which can make the compact shop units that line the seven streets a bit of a squeeze. If you can manage the huddle there’s a lot to admire, especially in the great brands on show, a mix of global players (Carhartt WIP, Urban Outfitters, Fred Perry), stylish eyewear brands (Ace & Tate, Cubitts, Ollie Quinn) and smaller, indie labels (Duke & Dexter, Super Superficial, The Cambridge Satchel Company). 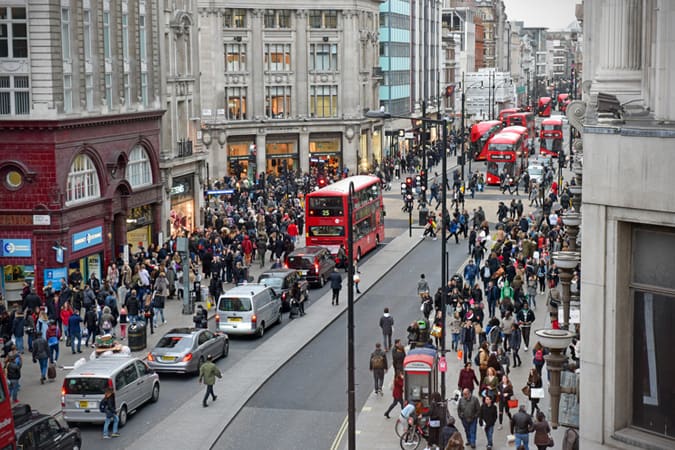 Half a million visitors dodge each other down Oxford Street, the busiest shopping street in Europe. The street is department store central – the quintessential British high street supercharged – with gargantuan branches of the ever-consistent John Lewis, luxury haven Selfridges and affordable treasure trove Topman.

Recently-opened draws for the fashion pack have started adding to the street’s already sterling reputation, the opening of flagship stores for German sportswear giant Adidas and luxury retailer Flannels the street’s new headliners.

Both offer the sort of all-encompassing shopping experiences we should expect in the future with the latter kitted out with interactive sporting challenges, smart mirrors and more art installations than a modern art museum. The marble-laden Flannels store is just as impressive with 36 4k digital screens around the store and a customisation service for your freshly bought sneakers. This is shopping 2.0. 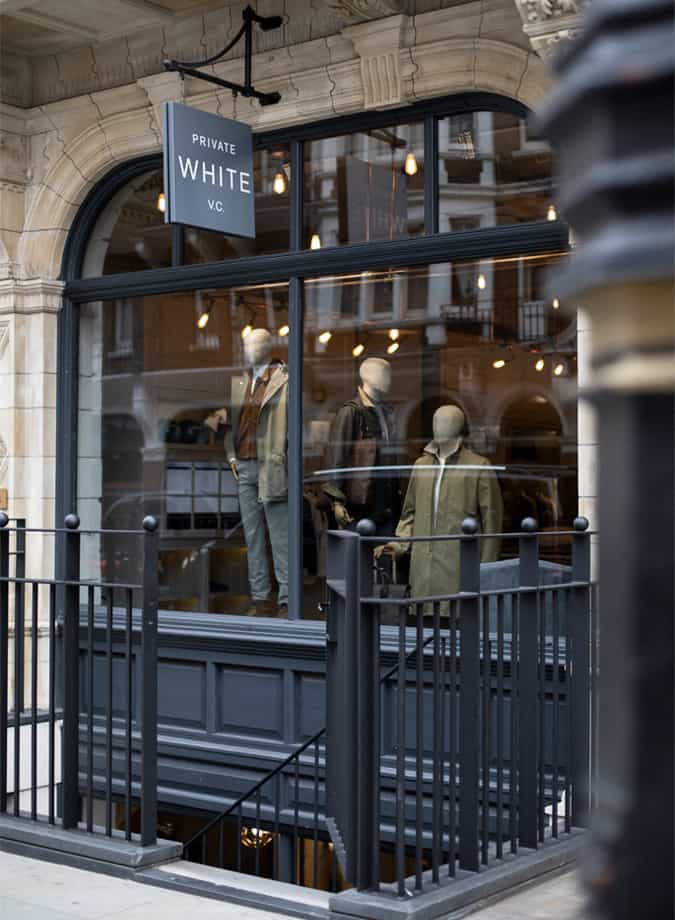 Intersecting London’s largest shopping thoroughfare Oxford Street, while simultaneously nestled on the Mayfair side of town where mega-watt fashion houses steal all the limelight, the names on Duke Street’s shop fronts appeal for their quality, without pretence.

Heritage outerwear brands and British stalwarts Private White V.C. and Barbour both have shops down the road, as do super-slick, ever-wearable French label Ami, its only shop in the UK. The real scene-stealer though is the three-floored Duke Street Emporium, a majestic looking red-brick department store from the minds behind premium high street brand Jigsaw that houses a sterling array of brands, an in-house coffee shop, a plush library, and a jukebox.

Buried under a sea of graffiti and artisan coffee shops, Shoreditch is the hipster’s paradise of London. Brick Lane is the big draw for tourists in the area, but once you’ve dodged the (excellent) Indian restaurants and rundown bagel shops take a walk down Redchurch Street just off of it, a small, fairly non-descript strip that has built up an under-the-radar reputation as one of the top menswear destinations in the city.

Preppy American label J Crew, French workwear purveyors A.P.C. and James Bond’s T-shirt brand of choice Sunspel all have stores down the street, and there’s even a branch of ritzy barber chain Murdock if you need a spruce up.

Curtain Road, a 10-minute walk away is also worth a visit, hipster haven Goodhood its crown jewel, home to ultra-hip brands like Beams Plus, Aime Leon Dore and Norse Projects along with some of its own exclusive collaborations. While all the moneybags hot foot it to Mayfair, Berwick Street in Soho is where the true, discerning menswear aficionados will make their way.

Britpop band Oasis famously shot the cover for its 1994 album What’s The Story Morning Glory down the higgledy-piggledy road which is now home to some of our favourite brands including the wearable likes of Scandi brand A Day’s March, Australian bootmaker R.M. Williams, and local heroes Folk, Universal Works and Oliver Spencer.

The holy streetwear trinity of Supreme, Palace, and Stüssy are all within a 500-yard radius of the street too, so if you’re looking for streetwear on the streets of London, trawling the alleys of Soho remains your best bet. 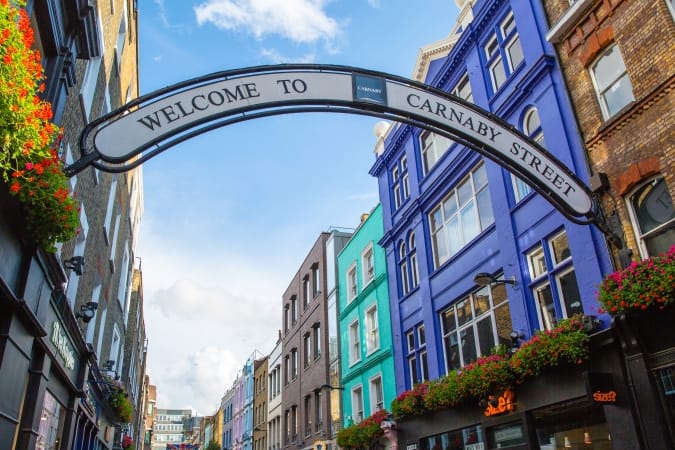 Not many streets can say they have charted the history of fashion like Carnaby Street can. Ground zero for the cultural explosion known as Swinging London, Carnaby Street later became a home from home to everything from mod style to punks, New Romantics to sneakerheads.

The street was pedestrianised in 1973 and remains an oasis for not just mod fashion (Fred Perry, Ben Sherman, Dr. Martens) but just cool clothes in general, with monochrome Belgian label The Kooples, on-the-pulse sneaker store Size and Italian tech-wear purveyor C.P. Company selling their wares there.

The shop units remain boutique-sized but if you’re looking for somewhere to spread your legs as you shop then historic department store Liberty is just around the corner as is the London flagship branch of treasured multi-brand retailer End. 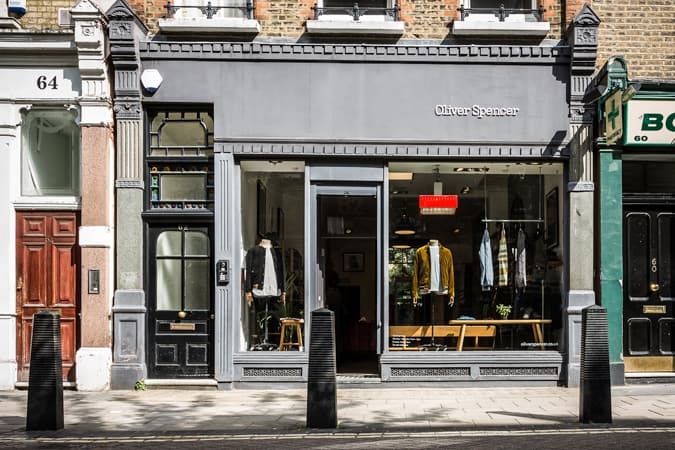 From the bunting that floats over the zig-zagging pavement to the pastel-colored shop fronts and abundance of independent cafes, cake shops, and green-grocers, there’s not much at first glance that separates Lamb’s Conduit Street from any other quaint, picture-perfect high street.

But grab your magnifying glass and spy the top-notch British brands from Oliver Spencer, which opened its first store on the street in 2008 and is spread across two shop-fronts, to the jazzy tailoring at Simon Carter and trendy, everlasting footwear on offer at Grenson. While you’re there, don’t forget to pop your head in the door of artsy Brit label YMC and the treasure chest of discovery that is menswear shop Number Six.

What To Wear In December: 7 Easy Outfit Ideas

Shopbop Is Having a Sale On Its Sale For Brands Like Ulla Johnson, Ganni, and More

The Most Stylish Men Of The Summer