Don’t worry. You’ll pick the perfect shirt for summer thanks to the comprehensive edit we’ve compiled below. From high street to designer and across every style that matters, this is every type of shirt you’ll need until your tan wears off and the leaves turn brown.

Some clothes have the quasi-magical ability to alter your appearance and vertical stripe shirts are among them. The lines on this style draw the eye up and down, making you look taller and slimmer – useful, if your summer body workout hasn’t exactly delivered the Zac Efron torso you ordered.

Summer stripes exist on a spectrum. The narrowest banker stripes remain pretty formal, while slightly wider bengal stripes give you easy Riviera vibes, especially on a crinkled linen shirt. Wider still, deckchair stripes can help to broaden the shoulders and alternating stripes let you lean into the 50s trend. Grandpa Simpson said it best, “I used to be with it. Then they changed what ‘it’ was. Now what I’m with isn’t ‘it’.”

While we can’t be certain the octogenarian cartoon character was discussing the vagaries of men’s fashion, it’s a sentiment that certainly applies to the Hawaiian shirt. Also known as an Aloha shirt (although Japanese prints are just as detailed and interesting), the style dates back to the 1930s, and has bounced between being cool and hideous for decades.

To stay on right side of history (think Al Pacino in Scarface, Brad Pitt in Fight Club, Leonardo DiCaprio in Romeo + Juliet, even Jim Carrey in Ace Ventura), the rules of styling are same as wearing any kind of bold print.

Balance out a busy top half and keep the shirt as the focal point by picking out a dark, neutral colour within the print for your lower limbs. From there you can simple keep palm and carry on. In the old days, shirts used to have removable collars so they could be worn multiple days of the week. You’d swap the collar out to keep it fresh. With the collar removed you’d essentially be left with a smarter version of what is today known as a grandad collar shirt.

Because they lack collars, grandad shirts are inherently less formal than their collared brethrens and are therefore better suited for summer. They work best when the top two buttons are left open, the sleeves are rolled up and they’re left untucked. Find one in a cotton or linen mix and wear it to a rooftop bar or pub garden to reap the benefits.

In terms of pairing it with other garments, think ‘casually tailored’. A pair of relaxed chinos or trousers with either a cropped or rolled hem is a perfect accompaniment, as are some crisp sneakers – minimal or vintage runners. The open collar shirt is the classy way to show off the pecs this summer without resorting to that staple of trashy reality TV, the V-neck tee.

With more names than a secret agent – you can call it a Cuban, camp or revere collar if you like, its all the same – the main criteria to scout for is mini lapels that lie flat against your chest, a cut beyond your waistband so there’s the potential to tuck it in and a floaty material (poplin cotton or viscose work best).

Block colours are easier to style, but the open collar is a versatile beast and a bulldozing print will bowl onlookers over when popped under a navy or black blazer. Alternatively, wear with a white vest underneath for a summer look straight out of the Hollywood playbook. Despite being a default option, the pique polo shirt doesn’t earn its spot alongside real summer classics such as the Oxford shirt or the grandad collar. This is due in large part to the fact that it’s been co-opted by stag parties, middle-aged manspreaders and every other undesirable style icon imaginable, ad finitum.

A change of tack in the polo shirt’s weave however, does wonders for its style credentials. By utiliing an open weave instead of a pique weave, the knitted button-through polo shirt knocks spots off its unfashionable cousin and instantly evokes all those mid-century movie star vibes that every man should be aiming for. Wear tucked into some chinos, pop on some penny loafers and you’re done. For the longest time, floral shirts were synonymous with colour-blind tourists and barbecue enthusiasts in their forties. Now, as menswear embraces bolder ways of dressing, they’re blooming everywhere.

There are lots of Hawaiian and Japanese prints around, but don’t forget the flower power designs of the ’60s and ’70s, too. All of them are cheerful, colourful and decidedly non-bashful. So keep them planted with block colour trousers and jackets rather than cross-pollinating with other prints and patterns, and look for accent colours (preferably a neutral) from the print to use in the rest of your outfit.

Want to try them with a suit? Go for it, petal. Just remember that smaller prints will likely work better if you’re dressing for anything even vaguely formal. 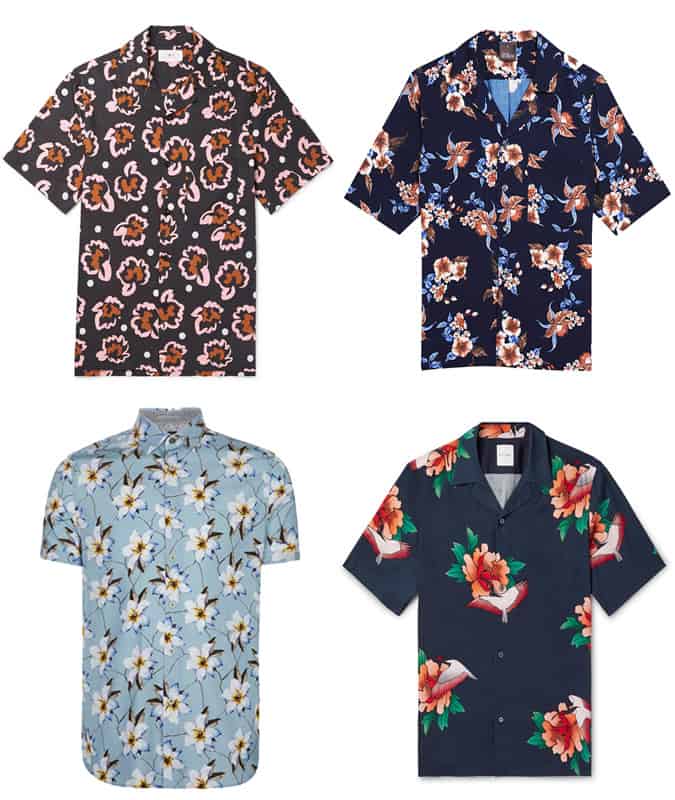 By all accounts, there are few things more stylish than a denim shirt. Had this handsome piece of Americana not been invented more than a century ago, there’s more than a chance we’d all be a lot less stylish and nude from the waist up. Most probably.

The trouble, however, comes in the height of summer when donning heavy denim is akin to trapping your upper body in an unforgiving fabric furnace. The answer is to trade in the thick, rugged twill for a less stuffy alternative.

Chambray — denim’s softer, lightweight cousin — is generally made of cotton, linen or a blend of the two, making it ideal for a summer shirting. For maximum versatility, choose simple button-down collar with no pockets or detailing and pair it with everything from unstructured tailoring to swim shorts. Admittedly, ‘check’ is about as broad a shirt category as you can get. Check shirts come in every variable you can image, from lumberjack-style buffalo flannel check, to micro-gingham business check, and everything in between.

For the sake of time, we’ll focus here on casual checks, appropriate of course, for summer. Checks give you ample opportunity to inject colour into your warm weather wardrobe, so opt for bright shades that can become the focal point of your looks. Short sleeve shirts work well with checks – it’s something about the laid back, holiday vibes they give off. Look for a Cuban collar shirt with a tonal check and you’ll be onto a winner.

In terms of combining checks with other garments, a general rule of thumb would be to keep things muted elsewhere and allow the checks to shout on their own. For your trousers or shorts, you could also pick a secondary colour out of your check shirt and run with it for a bit of complementary action. Once the sole preserve of the practically inclined, the linen shirt has come on in leaps and bounds in recent seasons, with cuts now friendly for those without a desire to relent to a shapeless mid-life wardrobe. This means that styles which err on the slim side and not made from the same amount of fabric as a parachute are the designs you should be looking at.

Equally as important as the cut here is deciding what to wear alongside. Don’t go double-linen; too Simon Cowell. Beige chinos? Congratulations, you’ve finally turned into your dad. Those with confidence and youth at their disposal should try a dark pair of drawstring trousers, while those a little longer in the tooth can opt for slim cargo trousers in dark shades. Minimal white trainers will complete your look and steer the linen shirt away from sun-ravaged playboy territory. Sure the Oxford shirt is as basic a shirt choice as you’re likely to make all summer, but there’s a reason this menswear titan has proved such a popular option through the years.

It’s smart-casual to a tee, mixing the cut of a dress shirt with a softer, more comfortable cotton while looking equally good with tailored trousers as it does with mid wash jeans. It looks better minus the suit jacket than a dress shirt, so works great for sweltering days in the office when only a malevolent dictator would make their staff keep their jacket on.

White and sky blue are more formal Oxford shirt shades and will bring out your summer tan. Stripey options and brightly coloured summery hues are quintessential beachwear and look great chucked on over your swim shorts when you come out of the sea. Colourful, printed shirts are everywhere these days, which means the stakes have been raised when it comes to what might qualify as a ‘statement shirt’. You can’t stand out in a Hawaiian print any more because everybody has one, not just your uncle who self-identifies as ‘wacky’. Fortunately, this is the era of maximalism, and if you want to be seen, by god there are shirts that can help you draw eyeballs.

Animal prints are quietly on the prowl in menswear at the moment. Tie-dye and vibrant, cartoonish prints are a cornerstone of sleazy scumbro style. If you want them, you could try baroque designs from Versace or arch-irony at Vetements. There’s block-colour neon, see-through shirts or even a few made from lace.

This is menswear fully off the leash so there’s no point in trying to offer you rules on how best to wear it. If you’re this bold, you don’t need any help from us.