These days, it’s impossible to keep up with the sneaker hype cycle, never mind every new hugely anticipated drop. It is worth keeping up with broader sneaker trends, though, plus what’s going on with smart shoes. Why? Because change is afoot.

There has never been more technology in our shoes, making footwear more technical and more comfortable at the same time. Smart shoes are getting more casual, while some trainers get dressier. And then there’s the stunning array of designs available today – your footwear lets you communicate your style and your individuality better than almost anything else in your wardrobe.

So what are you wearing? These are the spring-summer footwear trends we’re in step with this year.

The Return Of The Boat Shoe

Boat shoes haven’t been cool for some time. Unfortunately they’ve been tarnished with the ‘posh’ brush, and as any garment associated with old money can relate to, that’s not a good thing. But, continuing with the endless cycle of things coming back in fashion, boat shoes are enjoying a renaissance.

‘Street prep’ isn’t a widely used term, but it perhaps should be. The boat shoe is the footwear of choice for this new style tribe, which has adopted such garments as the rugby shirt, corduroy anything, Oxford shirts and chinos, but executed them in slightly cooler ways. Chinos for example may be purposefully wider of cut.

The boat shoes are slightly different too – they might feature chunky commando soles, or be simplified with less detailing and more of a moccasin feel. The point being you’re more likely to see them on city streets than the deck of a yacht. We’ve always found it easier to slip into colour when the sun is shining. Pastel pink just doesn’t work as well when it’s chucking it down. Its no wonder then that a number of footwear brands are dipping into their archives for a subtle summer reinvention by splashing their classic silhouettes with a welcoming hue.

British high street footwear store Clark has done so with its desert boot and Wallabee shapes (the dreamy clay is particularly striking) while Converse continues to change up its masterly Chuck 70 with more colours than a festival’s glitter booth. Just make sure you temper that colour pop with a neutral colour blocked pair of trousers or shorts. Before their return to the vanguard of men’s fashion, sliders were niche, most famously worn by dads with socks in summer for a trip down to the supermarket. The first resurgence of the slider riffed on this bad taste giving pavements a heavy dollop of unabashedly bold styling. But, this year, the sliders have got ideas above their station and have gone all upmarket.

What does this mean for summer’s laziest shoe? Well, for a starter logos have scarpered in favour of little branding beyond a tasteful embossed logo. Whereas previous iterations of sliders embraced wipe clean, mess resistant materials, this year’s best designs utilise suede, pebbled leather and patent leather for a much more grown-up and pared back take.

The results occupy that catch-all mid-ground, adding a bit of slickness to tailored shorts in the daytime and being just about acceptable to wear with linen trousers to a bar (only if you’re in tropical climes, mind). Retro trainers are the footwear trend that won’t quit. Eighties basketball shoes and chunky nineties styles mean that many sneakerheads keep at least one foot in the past and this summer, gum sole shoes will keep that back-to-the-future vibe going.

You see the toffee-coloured sole on skate shoes and basketball shoes, retro runners and football casual trainers. All of them recall smelly gym classes from years ago and in doing so tap into the insatiable market for throwback sportswear. They’re a little bit preppy, a little bit streetwear but whatever your tribe, the clash of colours between the upper and the midsole gives your footwear a subtle point of interest that works with tailored trousers better than it does a pair of joggers. It’s flippant of us to call sustainable fashion a trend per se. But there’s no denying that over the past year the industry has had its eyes firmly opened to the need for more eco-conscious ways of making clothes.

Big name sneaker brands like Adidas and Nike have pledged to cut out unsustainable practices, but the real leaders are the brands who’ve been doing it from their very beginnings.

British label Stella McCartney has been able to combine its high fashion smarts with a stand-up sustainable manifesto to create one of the must-have sneakers this season, the chunky masterpiece that is the Loop, while we’re seeing the simple but effective kicks of slick French sustainable sneaker brand Veja everywhere at the moment.

Fashion’s footprint has a long way to go, but these good-looking sneakers are a step in the right direction. Smart Shoes Get Chunky (And Comfy)

Chunky soles don’t appear to be going anywhere. We first saw them surge in popularity on the bottom of ugly sneakers a few years back, and now they’ve made their way on smarter shoes, which traditionally featured slim leather soles.

These chunky soles give a bit of an edge to more formal styles, lifting them from the drop business connotations they’ve often been associated with. They might be white Vibram wedge soles, lightweight and comfortable, or more aggressive commando soles that are ready to tackle anything you throw at them.

Look for suede styles with chunky soles this spring – a loafer perhaps – which would pair well with either tailoring or casual dress on the weekend. Techno Trainers Get Another Update

Yes, we know, technically speaking all trainers are technical, but while some trainers (most notably the minimal kind) go to pains to hide their nuts, bolts and sciency innovations, technical trainers wear their functionality loud and proud.

A webbed sole here or an elastic side lace there, the best technical trainers show their workings on the outside and should look like they’re ready for performance. For styles that have performance to match their outward appearance, look to the usual suspects such as Nike, Adidas which go to pains to add the latest footwear wizardry.

With styling as technical trainers look like something you’ve thrown on at a whim, pay attention to what you’re wearing on your bottom half erring smarter than usual and avoiding light or medium wash jeans at all costs. Skatewear is all grown up. No longer just for kids hanging out on the edge of town, skate brands like Palace have been setting the menswear agenda while classic skater staples have infiltrated style tribes of every kind. There are hoodies at the office, logos everywhere, Vans worn with tailoring as much as a hard-wearing pair of Dickies.

And further proof comes from the fact that it’s not just the likes of Vans and Converse making classic skater sneaker styles. Now the likes of Grenson and Common Projects are making smart versions of slip-ons, sleek enough to pair with a blazer. And bloody comfortable to boot. Trail And Hiking Shoes Will Peak

Hiking boots were very much ‘in’ during winter so it stands to reason their little brother and sisters, trail runners and the rather peculiar hiking sandal, would carry the aesthetic torch into the sunny months.

Trend setters Balenciaga recently took on the trail runner, clearly attracted to the multiple layers and chunky soles, two features echoed in the trail runner’s hyped cousin, the chunky trainer. The key is to utilise those layers and pluck for an explosion of colour, enough shades at least to make you the talk of the office.

Conversely, the rise of the sandal is down to a bizarre re-appraisal for the clumpy footwear of German shoemaker Birkenstock. As derided as Crocs in the past, the brand has seen its stock substantially rise through collaborations with some of the coolest brands on the planet including Rick Owens and Valentino. Imitation is of course the highest form of flattery and the practical sandal, by way of our German friends, is now a summer must have. 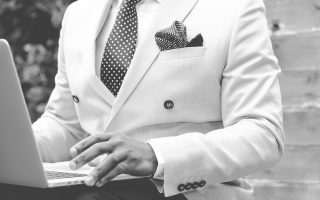 Why a Pocket Square Makes a Gentleman