Skip to Content
Home / Fashion / The Once and Future Handbag 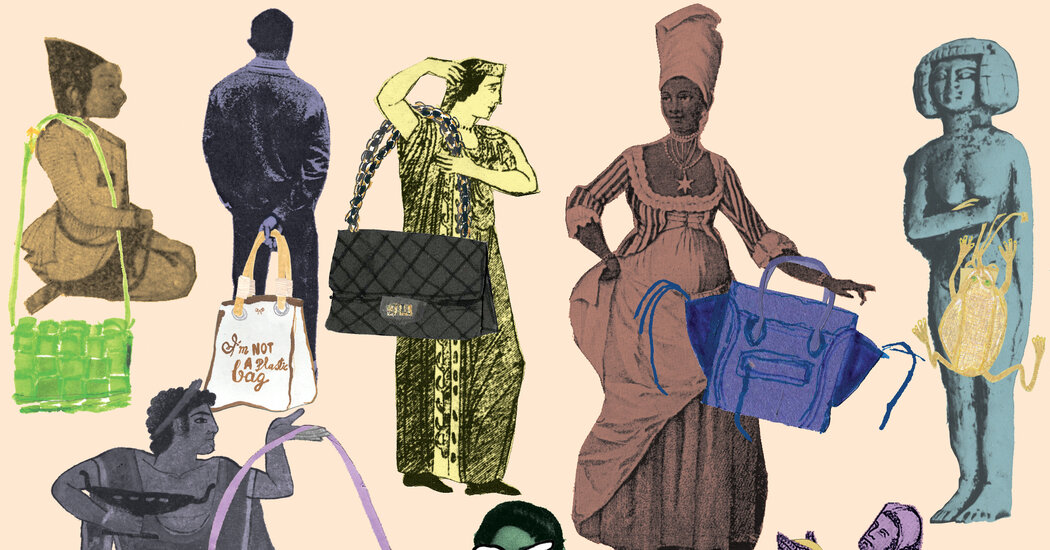 In a case of truly unfortunate timing, the week before the Victoria and Albert Museum’s blockbuster show celebrating all things bag related — an exhibition over 18 months in the making, one of the largest ever in a museum, with loans from around the world — was to have opened on April 25, Britain shut down in response to the coronavirus. The show was postponed.

So far, so normal for global cultural events during the pandemic. But then something unusual started to occur.

As the months of stasis stretched on, the whole concept of the handbag, that repository of stuff and signifier of personality, that accessory that had become so obsessively renewable it drove record-setting profits for numerous fashion brands, began to seem irrelevant. And not just because there were fears when lockdown began that bags could be virus carriers.

What was the point of a bag if no one could go out? Why did we ever think we needed so many of them in the first place? What are we supposed to do with all of those extra totes and purses and clutches? According to data from Euromonitor, a research firm, bag sales this year fell 10 to 28 percent in every region of the world compared to last year.

Suddenly it seemed as if, with 2020, the age of the handbag might actually have come to an end. With the V&A show, when it happened, if it happened, acting as its obituary.

This weekend “Bags: Inside Out” finally opens to the public, and what it suggests is that any rumor of the death of the handbag has been greatly exaggerated.

That, in fact, bags have been intertwined with both male and female identity for centuries, and have survived multiple crises, only to return with even more import. That reports from Dior and Hermès of handbags selling out as stores reopen in Asia and life returns to quasi-normal are actually not anomalies, but part of a historical pattern.

That the news of record vintage handbag auctions at Christie’s, the dominant force in the resale market, which recorded a total of $2,266,750 during an online sale in July, including $300,000 for a crocodile Hermès Diamond Himalaya Birkin 25, may be a harbinger of the future. That the hullabaloo on social media last week about the Houston Rockets point guard James Harden giving the rapper Lil Baby a black Prada nylon duffle bag for his birthday filled with very expensive treats was a sign of the times.

“People kept saying it was the end of bags,” said Lucia Savi, the curator who put the V&A show together. “But bags go hand in hand with humanity. We have always had to carry something.”

Even in a pandemic, it turns out, le sac c’est nous. Perhaps what we ought to be wondering is why.

A Brief History of Handbags

It is impossible to know who invented the handbag, but they seem to have been with us almost from the beginning. Bags made from linen, papyrus and leather were found in the tombs of ancient Egypt, dating from 2686 to 2160 B.C.E. In ancient Greece, little leather bags were used for coins; one of the first known purse owners was Judas Iscariot, whose job it was to carry the money bag for Jesus and his disciples.

The British Museum has a gold and garnet lid believed to have come from a bag belonging to a man in the seventh century and found in the Sutton Hoo excavation. There are bags depicted in an Assyrian wall carving found in the palace of Ashurnasirpal II at Nimrud in the ninth century, featuring a winged figure toting what looks like a purse.

Bags play a role in “The Canterbury Tales,” “Pride and Prejudice” and “Anna Karenina” (among other literary masterpieces).

Indeed, Ms. Savi said her point with the show was to elucidate the living and universal nature of bags — not to treat them as sculptures in leather and cloth, but to reveal the peculiarly unique role they play in both our physical and psychological lives, and the ways in which they become part of not just the fashion record but also history.

That despite all of its iterations, there is no substitute for a bag.

Hence the show, the largest devoted to bags to be held at a museum that is not a bags-only museum since the 2004 “Le Cas du Sac” at the Musée de la Mode in Paris (Those bag-only museums include the Simone handbag museum in Seoul; the Tassenmuseum, or Museum of Bags and Purses, in Amsterdam; and the ESSE Purse Museum in Little Rock, Ark.)

Composed of more than 250 bags and bag-related pieces from around the world, “Bags: Inside Out” is divided into three parts: function and utility (bags as receptacles); status and identity (bags as celebrity totems); and design and making (how bags are constructed).

There are famous bags of the kind that have penetrated the pop culture imagination, like the first Birkin made for Jane Birkin, lent to the show by its current owner, a collector and French boutique owner. (Ms. Birkin auctioned the bag in 1994, and it comes complete with scratches and other signs of use.) There is the Fendi Baguette famously stolen from Sarah Jessica Parker’s character in an episode of “Sex and the City” and the Louis Vuitton Miroir beloved of Kim Kardashian West.

There are power bags, like Margaret Thatcher’s structured Asprey and Winston Churchill’s red dispatch box for papers of state. And there are historic bags, such as an inro, a pillbox bag from the 19th century used by Japanese men to carry medicine, and a 17th-century purse in the shape of a frog. They remind us, Ms. Savi said, “that we haven’t invented anything,” including the turn-of-the-millennium concept of the It bag.

“They are both a very glamorous container of personal belongings that acts as a sort of secret receptacle as well as a container of memories,” she said. “At the same time, they are very visible on the body, telling people who we are and who we want to be. They embody the tension between inside and outside and function and status.”

Bags are something you touch every day — their materiality is endemic to their appeal — as well as a flag the outside world can see. As such they play a dual role as personal comfort and public communication. For a relatively small, even everyday, object, they contain multitudes.

So perhaps what should be surprising is not that bags have endured, but that this is the first show the V&A has devoted to them, after shows on shoes and hats. This despite the fact that the museum’s collection includes 2,000 bags, in pretty much every curatorial department, and, according to the catalog that accompanies the exhibition, “each month, visitors from across the world leave around 10,000 handbags and suitcases in the cloakrooms” of the museum.

It may be counterintuitive, but even if we are going out less during the pandemic, we often have to carry more when we do go out, meaning the bags we choose are increasingly important.

They need to hold hand sanitizer, gloves, masks, extra shoes, all the personal protective equipment we have now become used to bringing on any outing — just as, during World War I, Ms. Savi noted, people needed bags to hold their gas masks. (Queen Mary’s gas mask bag is on display at the V&A show.)

It is also true, said Beth Goldstein, the fashion, footwear and accessories analyst at NPD Group, that despite the general slowdown in the bag market during the pandemic, certain segments have proven notably hardy, especially the higher end and resale.

Charles Gorra, the chief executive of the Rebag resale site, said that just after the start of lockdown in the United States they had a week of sales larger than Black Friday and Cyber Monday of 2019 combined; he attributes the growth to the need for “retail therapy” and desire for self-care.

Ms. Savi cites three additional factors: the professional sectors that stayed solvent during the pandemic maintained an income stream even as current events curtailed discretionary spending, creating more disposable income; the fact that of all fashion items, bags are among the easiest to buy online, everyone’s current shopping destination of choice; and the behavioral tendency, in times of crisis, to retreat to the classic, putting money into pieces that hold their investment and aesthetic value.

As for investment pieces, a paper from Art Market Research published this summer noted that the market for collectible handbags — especially bags by brands like Hermès, Chanel and Louis Vuitton — has been “doing so well it outperformed art, classic cars and even knocked rare whisky off its number one position as an investment of passion this year.”

Since 2010, the report said, “the average value” of an Hermès Kelly handbag has risen 129 percent. The bag’s success has created a trickle-down effect, and now “collectors are embracing vintage pieces from other iconic brands.”

So while we may never go back to the peak acquisition days before 2020, and while styles and sizes may rise and fall with the exigencies of life — cross-bodies appear to be having a mini-moment, according to Ms. Goldstein of NPD — the theory that bags are an item of the past is equally improbable. Just as our wardrobes have not reverted to sweatpants despite the Chicken Littles crying that fashion has fallen, so our accessories will not be reduced to the fanny pack. (Ms. Goldstein said fanny packs are already out of favor.)

Indeed, amid all the hand-wringing — perhaps precisely because of the hand-wringing, — Ms. Savi thinks that bags have become another kind of symbol. Not of aspiration or indulgence, not of what we have lost, but rather of optimism and hope. That to swing your bag onto your shoulder is to make a statement of belief: One day we will go out again.

And that means, she said, “we have realized we do need bags. Actually more than ever.”

Burberry Is Taking Its September Fashion Show to the Great Outdoors