Bad linen suits, the lumpy, crinkly, misshapen kind that resemble a discarded sack of potatoes, have given the style a bad rep over the years. But if you understand that quality (and the subsequent cost) is a prerogative, then you’ll soon realise there truly is no better way to do tailoring in the sweaty, sticky summer.

For the uninitiated, linen is a natural fibre that comes from the flax plant, the name having derived from the Latin name of the plant. “Before the advent of man-made fibres, linen was often used as the inner layer of expensive garments, which is why it is still referred to as lining,” says Holger Auffenberg, head of design at Savile Row tailor Chester Barrie.

But, somewhere along the line, linen graduated to full suit status. It’s maybe the ultimate warm-weather fabric and a vastly underrated choice for tailoring. Here’s everything you need to know.

Why Buy A Linen Suit?

Linen’s history as one of the most interesting and practical materials in clothing owes much to its secret powers, faculties that really come to the fore in hot weather. Good quality linen isn’t necessarily lightweight, but its low thread count makes it cooler than cotton while it’s also said to be 30 per cent stronger than its summer fabric rival.

“Linen also absorbs water while a high-quality linen suit will be at its best for longer than a cotton or traditional wool suit due to its natural resilience,” says Simon Maloney, creative director at bespoke clothier New & Lingwood. “Although a high-quality linen suit will feel rougher than a new cotton or wool suit it does get softer over time and is conveniently hypoallergenic, so it doesn’t have to be aired out after dry cleaning like a wool suit.”

The major issue with linen is of course how easily it creases, a concern to be embraced rather than be fearful of, according to Christopher Modoo, creative director at tailoring brand Kit Blake.

“Linen creases, deal with it,” he says. “The heavier, textured linens tend to crumple elegantly but be aware that it is not a pristine look. Simply put, linen is for confident dressers. If you are worried about creasing or just looking for something a little more refined, consider a blend of linen with wool and silk.”

What To Look For In A Linen Suit

When shopping for a linen suit, Modoo mentions a few hallmarks of quality that it pays to remember. “A linen suit should be only partially lined so look for models with buggy-lining (a lining that only covers the back shoulders of the jacket).

“Side patch pockets should be less bulky than [on] a traditional suit and make sure the trousers are unlined. A lot of high street brands line their linen trousers in man-made fibres which causes them to wear warm and not hold a crease.

“It’s also worth considering an unstructured style as this will have less bulk, but they can be a little shapeless.”

How To Wear A Linen Suit While linen is naturally more casual than other suit fabrics, it’s still a smart replacement for your wool suits around the office when the train into work shifts into sweat box territory.

Avoid pairing a linen suit with a linen shirt though. The elegantly crumpled texture of linen looks far superior and calculated when put alongside a crisp cotton shirt for contrasting texture. Tie wise, a patterned option will slot nicely into linen’s casual nature. Smart-casual is where linen really excels. Yes you can wear an unbuttoned dress shirt for any summer weddings you have coming up but if you want to take it down a notch further, and prevent any sweat patches while you’re at it, swap it out for a pique cotton polo shirt.

The textured weave of the pique disguises perspiration while also contrasting with the texture of the linen. With it being summer and all, you can also free those mankles and get some much-needed circulation via a neat turn-up and a sly ankle sock. The good thing about a linen suit is you’re already starting to stray from the script, which makes it easier to completely divert away from the suit’s natural formality. It doesn’t get more casual than a T-shirt but if you’re going to attempt the once-unthinkable and pair your tailoring with one it’s best to play it neutral with the colour.

A white or grey tee works best in summer and allows you to play it up with the colour of your tailoring, while a black tee with a bottle green suit is a deadly combo for a night out. Keep the minimalism and rule-breaking in your footwear by tossing the dress shoes and slipping a slick pair of white calf-skin trainers on instead.

Richard James swept away the cobwebs that had accumulated down Savile Row when it opened on the hallowed street in 1992, introducing a more fashion-orientated way of thinking about tailoring. And it continues to effortlessly blend the traditional with a forward-thinking approach today.

Take this summery linen suit from the brand, for example, which takes the 2019 Pantone colour of the year, coral, and lovingly splays it over an elegant two-piece. With its name an amalgamation of the town where its first factory was located and the surname of Peter Pan author J.M. Barrie, Chester Barrie is a tailoring institution that can claim credit to having outfitted some of the creme de la creme of suit wearers during its illustrious history, including Sir Winston Churchill and Cary Grant.

Expect this tradition to seep into every pore of its suits, with old-school touches like herringbone weaves and masterfully chunky lapels. Collection of Style, more commonly known as Cos, sits front and centre in the H&M group crown. The premium chain is one of the best spots for affordable tailoring on the high street, excelling at a relaxed and loose style that plays well with its Scandinavian heritage – it’s just the vibe you want to channel with your linen suit.

Cut to drape slightly over the shoulders, its linen is also blended with eco-friendly lyocell, which like linen offers much better moisture absorption than cotton, while its smooth fibres soften the natural roughness of its partner-in-crime. New York fashion label Theory excels at premium basics where the emphasis is on cut and fabric. The brand has just released a line woven in Italy which is crafted out of eco-friendly, sustainable linen that has been blended with recycled elastane for a comfortable stretch.

Three suits stand as a centrepiece to the collection, cut with an unstructured silhouette and an elegant drape, they are the epitome of what a modern linen suit should be – simple, sustainable and undoubtedly stylish. Legendary Neapolitan tailor Rubinacci has been in the family of the same name since 1932. No lining or padding is used – there are no shortcuts, just a great cut. Expect distinctly natty features like brightly coloured cloth, lapels wider than a dual carriageway and sly patch pockets for a suit that will put all those preening Pitti peacocks to shame. 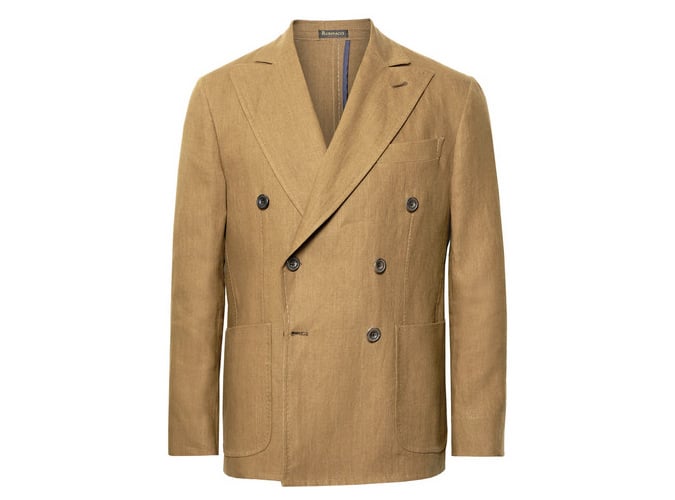 Why This Audemars Piguet Is The Original Baller Watch