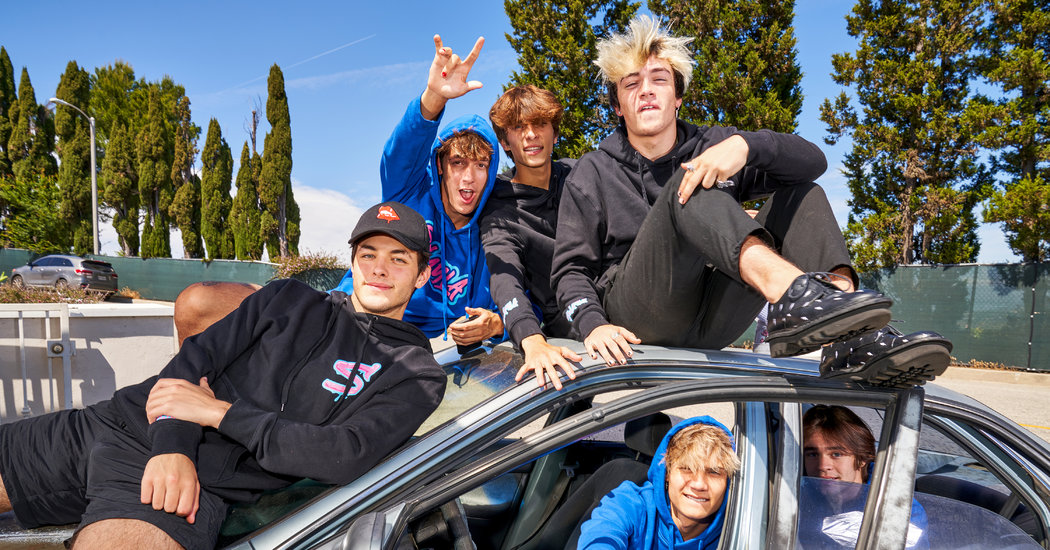 When a group of young men moved into a 7,800-square-foot mansion on a quiet street in the Bel Air section of Los Angeles in late January, their new neighbors took notice. Some assumed they were tech entrepreneurs. How else could they afford rent?

Soon, the block’s residents began to observe what one might call frat-like behavior. The six young men and their friends blasted music until late at night. They received a steady stream of food delivery, unusual in a family neighborhood where most cook at home. The garage, which was frequently left open, was piled high with Amazon boxes. Trash accumulated on the sidewalk. A giant TV that had been destroyed sat outside for several days.

The neighbors traded stories and speculated about what was going on in a block-wide group chat. Finally, one neighbor confronted them. That’s when the men identified themselves as members of the Sway House, a collective of TikTok and YouTube influencers.

The group, which has been called “the One Direction of TikTok,” is made up of several creators famous for their party-boy antics: Bryce Hall, 20; Jaden Hossler, 19; Josh Richards, 18; Quinton Griggs, 17; Anthony Reeves, 18; Kio Cyr, 19; and Griffin Johnson, 21. They are one of several collab houses that have cropped up all over Los Angeles in recent months. But while most of those groups are tucked away in secluded areas on the outskirts of the city, the Sway House is in the middle of a swank residential neighborhood and has made life for the people who share the block a nightmare.

Amit Runchal, who works in tech, and Mindy Acevedo, a law student at U.C.L.A., are temporarily living in the house next door. Since mid-March, Ms. Acevedo, 31, and Mr. Runchal, 40, have been working and studying there, which has been challenging with all the noise.

“In the morning we hear paintball guns. I don’t think they sleep,” Ms. Acevedo said. “There’s a pool outside. Whenever they’re hanging out by the pool, the sound just carries. We can hear them shouting ‘chug, chug, chug.’ I’ve heard someone throwing up at night outside.”

The men cruise through the neighborhood in a beat-up gray car emblazoned with the house’s name. Neighbors described how the quiet street has been transformed into what one said “feels like Coachella.” This echoes similar complaints made in 2017 against the YouTuber Jake Paul’s West Hollywood party house, but with a new twist: The Sway House members have repeatedly ignored social distancing guidelines during the coronavirus pandemic, even throwing large parties and posting about them on Instagram.

This has caused further problems for their neighbors. One neighbor said that women have shown up her doorstep at least four times in the middle of the night after mistaking her home for that of the Sway House. (The Times agreed to grant her anonymity in order to speak without repercussion.) She said her and her husband feel scared and violated. (Cellphone service on the street is limited, and several houses don’t have clear street numbers, so it’s easy to confuse one address for another.)

Renee Maltz, 62, has noticed an uptick in foot traffic in the area since the social media stars moved in. “You see the youngest people in the street, just standing,” she said. “They stand there sort of zombielike.” Her husband, Jeff Charlston, 70, said the house has become a sort of a nightclub on occasion. “I’ve seen girls parking down the street then walking down in groups, almost as if they don’t know if they’re going to get in,” he said.

Two neighbors say they have confronted the members of the Sway House directly about the chaos. Others have called the police to file noise complaints. After Ms. Acevedo texted Mr. Hall on May 21 to let him know that she was once again filing a noise complaint with the L.A.P.D., he chided her by responding, “Aren’t you the babysitter?”

“To our knowledge there have been no formal noise complaints,” Warren Lentz, the C.E.O. of TalentX, manages the house’s members and provides them with the house in exchange for content. “We have been in frequent communication with both the L.A.P.D. and city counsel to ensure the safety of the neighborhood. In order to follow proper protocol, we hired security for our clients and the house.” The owner of the property did not return a request for comment.

In interviews, several neighbors said that they wanted to resolve things with the Sway House members directly but were concerned about possible repercussions.

“There’s an undercurrent of fear and intimidation both from all the stories in the media about people getting doxxed, swatted, harassed, especially if you’re a woman, which many of these neighbors are who are dealing with this stuff are,” said Mr. Runchal. “With fans and actual people mistakenly showing up to our houses, there’s a virtual and a physical threat.”

Members of the Sway House regularly hang out in an empty lot across the street from their rental property. A couch has appeared in front of the lot. Some neighbors say they have seen Sway House members and their guests hanging out there, in some cases smoking. “It’s like they’re testing limits for the very first time in their life,” said Ms. Maltz.

Given all that’s going on in the world, people who live near the Sway House said they felt bad complaining about unneighborly behavior. But those on the neighborhood group chat were pleased to learn last Saturday night that at least two of the house’s members, Mr. Richards and Mr. Hossler, would be moving out and into their own apartment.

Their departure followed a recent road trip across America which resulted in the arrest of two house members on drug charges, as well as some online backlash. Residents took it as a sign that perhaps things would soon return to some semblance of normalcy. “Things have quieted down significantly in the past few days,” Mr. Charlston said.

“I feel bad when I’m like, ‘You don’t belong here,’” Ms. Acevedo said, acknowledging that she too is a “guest” in the neighborhood. “But I wish they cared more about anything other than getting famous on the internet.”

The Best Places To Buy Clothes In London