Triceps come behind biceps anatomically, located as they are on the back of your upper arms. But they also lag behind the precious “guns” on most trigger-happy lifters’ priority list.

“When it comes to appearances, every guy wants to improve what he sees in the mirror, which leaves a lot to be neglected,” says Tim Walker, founder of London’s Evolve Fitness, which conjures up more astonishing body transformations than a Hogwarts transfiguration class. “Even though your triceps make up two-thirds of your arms, they most definitely do not get 66 per cent of the attention, or even half for that matter. It makes no sense to neglect your triceps if you want bigger guns, as they are most of your arms.”

Aside from the principal objective of straining shirt sleeves, your triceps are also secondary movers in the bro-loved bench press and any kind of overhead press. “If you strengthen all the links in the chain then you will become stronger in that movement,” says Walker. “So if you pay more attention to your triceps, then those big lifts will get bigger.” 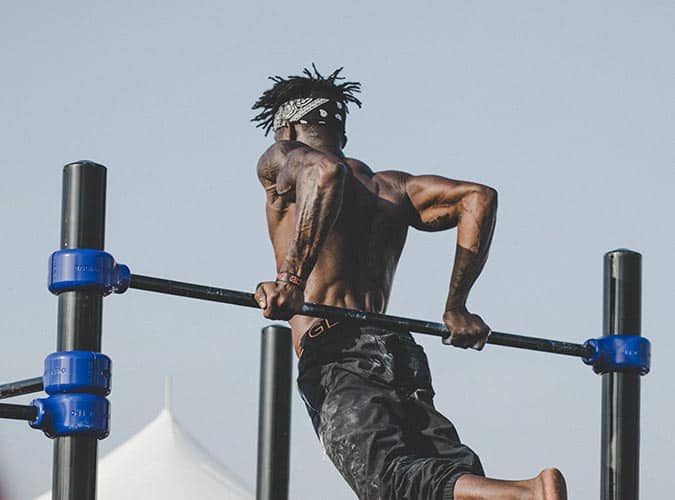 The mistake that most men make when they do actually train triceps, according to Walker, is repetition. “This is especially bad for triceps because they have three different heads – long, medial and lateral – and each part needs stimulation and variety.” That could come from exercise selection or time under tension. “If you’re smashing out ten reps in ten seconds, that’s not long for the muscle to be working,” says Walker. “Make sure you feel each rep from start to finish and squeeze hard when you lock out.”

Based on the principles of legendary strength coach the late Charles Poliquin, this varied, spicy tricep workout from Walker will pep up your tired routine. A word of advice (or perhaps a warning) the “eccentric” or lowering portion should be slow and controlled throughout. Yes, even on the sets of 16. If this was leg, back or chest day, then weighted dips and close-grip bench press would be squats, deadlifts or, um, bench press. “They’re the two biggest exercises for your triceps, as you can go the heaviest and they use the most muscles,” says Walker. “Hence, do eight reps and load up.” Your chest, shoulders and back also contribute.

Technique
Wear a weight belt or hold a dumbbell between your feet. With arms straight on parallel bars, lean forward so your torso is roughly 45 degrees from upright. Keeping your shoulders down and back, flex your elbows and lower until your upper arms are parallel to the floor. Don’t let your arms flare out beyond 45 degrees to your body, or your wrists bend.

A switch-up of the traditional bench press, bringing your hands to shoulder-width or slightly narrower (not so that you hurt your wrists or imbalance the bar) shifts the emphasis to your tris, although your chest and shoulders will still get involved. “These two pressing exercises hit the medial head the hardest, so after these move onto more single-joint isolation exercises,” says Walker.

Technique
First, find yourself a burly spotter, and make sure he’s not distracted taking swelfies. With your feet flat on the floor and hands as above, engage your glutes, activate your core and retract your shoulder blades. Lower the bar to your chest – gravity shouldn’t be doing the work here – then press back up explosively. Again, don’t let your arms flare out.

Don’t worry, it’s your triceps that will be pulverised by these, not your cranium. Well, as long as you don’t lower too far. “Skull crushers focus on the long and lateral heads of your triceps,” says Walker. If you’ve never used it for curls, the EZ bar is the one that looks like the Hulk got bent out of shape. (It’s kinder on your wrists than the straight version.)

Technique
Holding the EZ bar with your palms facing away from you and slightly in, lie on a bench with your arms straight and at 90 degrees to your body or slightly towards your soon-to-be-crushed skull. Bend your elbows to lower the bar towards your forehead – slow and controlled, remember? Then squeeze your triceps to straighten your arms.

AKA the classic. “Rope press-downs target the long head even more, and are an easy way to squeeze every last bit out of your triceps with a light weight,” says Walker. But in order to hit the long head, which also extends your shoulders, you need to lean forward 30 to 40 degrees instead of standing upright like the Friday night pump crew.

Technique
Connect a rope attachment to a high pulley then grab it with both hands and angle yourself as previously described. Pull the rope down until your forearms are perpendicular to your torso – this is your start point – then extend your elbows. “Make sure to flare your hands out to the sides and hold a contraction on every rep,” says Walker.

Nobody devotes a day to triceps, which are relatively small, no matter how much you train them. “You’d always be working at least one other muscle group in a session,” says Walker. But for advanced trainees intent on forging horseshoes to rival Vulcan himself, Walker suggests pairing whichever you didn’t do out of weighted dips and close-grip bench with straight-bar overhead cable extensions. Set a timer for 15 minutes then performing alternating sets of 8-10 reps with a weight around your 12-rep max.

“Superset the two exercises as many times as possible in 15 minutes, or until you can’t manage six reps after a 30-second break,” says Walker. “This style of Escalating Density Training is great if you’re short on time as even ten minutes will fry a muscle group. You can also use opposing muscle groups, so you might do bench press and bent over row for 20 minutes, then walk out of the gym pumped and magnificent.” Don’t tri these at home, the gym or anywhere else. “When you say ‘close-grip push-ups’, guys often position their hands with their thumbs and forefingers touching in a diamond shape,” says Walker. “Why? Where did this come from? You can’t get a full rep, and when you go low, you have to flare out your elbows and bend your wrists, both of which remove the effectiveness. Stick to having your hands just inside your shoulders.”

“This exercise often puts your shoulders into a very poor, internally rotated position, so you can’t get enough range of motion and have a high risk of injury,” says Walker. “You also can’t load effectively.” Real men use parallel bars – kneeling on a platform for assistance if necessary.

Nowhere near as profitable as the name might suggest. “You can’t lift enough with good form to stimulate your triceps, and you’ll likely struggle to hit a full contraction straightening your arm behind you,” says Walker. “Don’t do these. There’s literally no point.”