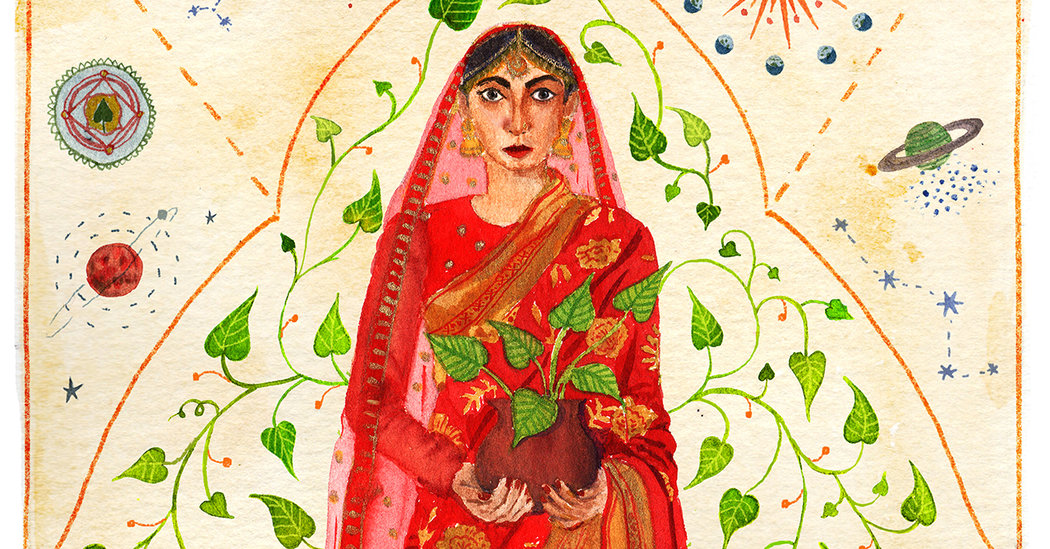 I’m sitting with my hands clasped in a prayer. My eyes flutter between open and close. A scarf draped over my head refuses to stay put. A fire crackles gleefully in front of me.

It’s my wedding day. To a clay pot.

How did it come to this? The short answer: My stars were not aligned.

In the West, the term “kismet” usually refers to a quirky serendipitous encounter, a blip in a universe powered by free will and randomness.

But in India, the concept of kismet is an overpowering social force. Fate or destiny: It’s not just inescapable, but a rational scapegoat for the bad times and a benevolent provider for the good times. It is almost an entity with its own will.

It doesn’t mean Indians who subscribe to this viewpoint don’t work as hard or challenge themselves, like those who subscribe to a meritocratic universe. It just means they prepare spiritually for what lies ahead, akin to carrying an umbrella on a cloudy day. For many Indians, particularly certain Hindu castes, Vedic astrology is that umbrella.

In every Indian city, fortune tellers set up shop between the chai stalls and sari stores. There are universities dedicated to astrological understanding, and TV shows of gurus fielding viewers’ burning questions about the stars.

As soon as someone is born, parents rush to their trusted astrologer to draw up a chart — a “janam kundli” — that is said to map the exact position of the planets at the time of birth, down to the minute. This geometric constellation of diamonds and squares and triangles details everything from your constitution to what color you should wear for good luck to whatever that winking, smirking kismet has planned for you.

According to the chart, Mars occupied my house for love and marriage. And that, in Vedic astrology, makes me “manglik,” or Mars cursed.

Plagued by a Planet

I and my oblivious, cursed self met my very human lover on Halloween in 2012.

I was at a party when I saw him across the room, dressed as a mad scientist with naturally flowing salt-and-pepper hair. I was dressed as a sheriff, complete with a star badge. I was smitten in minutes. He didn’t even ask for my number. It was only after some convincing on my end, via Facebook messenger, that he agreed to go on a date.

But if I was comfortable going after Mr. Salt and Pepper, it took me three years to work up the courage to introduce him to my very traditional parents. My mother’s first question: “When’s your birthday and what time were you born?”

Mangliks are urged to marry other mangliks, you see. Otherwise disaster ensues: arguments, incompatibility, even divorce or death.

My mother took my boyfriend’s birth date and time to several trusted astrologers and was told that, alas, my human lover and I would never work.

So she put her foot down, and refused to let me marry him.

A rift was formed. My parents and I went months without talking to each other. I knew I wanted to marry Mr. Salt and Pepper. My stubbornness clashed with their stubborn views. That dry, red planet turned my home into a cold, dark shell.

Life and Death With Mr. Pot

My father scraped his way up from near nothing.

He grew up in Jodhpur, Rajasthan, as the middle child in a family of six children, living a life of meager means.

We are Sindhis, meaning our ancestors come from a province called Sindh that officially became Pakistani territory after the partition of India in 1947, which unleashed one of the largest and the most brutal refugee crises in history. Millions of Hindu Sindhis crossing over the new, freshly drawn border wound up in Jodhpur, like my father’s grandmother.

When my father turned 21, he sold cassettes and tapes. He worked for a recruitment agency in Mumbai. He tried his hand as a wedding videographer and photographer. One day, he chanced upon the opportunity to move to Hong Kong to trade leather goods and custom-made suits around Asia.

That opportunity was the one that brought my family some financial security. My father worked himself to the bone in this new job, shuttling in and out of Hong Kong on red-eye flights and packing his days with back-to-back meetings. But, to this day, he credits kismet with much of his success. “Kismet gives you opportunities,” he says.

In Hong Kong, my father provided me with the luxury of a very international education, one that approached the world through a Western lens and defined kismet as a quirky serendipitous encounter, as mere coincidence. In other words, he afforded me the privilege to see life from a perspective different from his own.

It was that privilege, in the end, that cleaved a generational, cultural and intellectual gap between us. When my parents told me that marrying my boyfriend would be disastrous, I fought back. “But I love him!” I would say, angrily, because that was my strongest argument.

At the time, my boyfriend had moved to New York for work while I stayed in Hong Kong, and we remained in a committed, long-distance relationship.

“Love isn’t enough,” they would say back. In their eyes, Mr. Salt and Pepper was poised to destroy my life, and my mother would continue to say, look, he’s settled in New York now, he won’t come back for you, it’s time to move on, “it is kismet.”

I refused to listen. I would text my boyfriend every morning and every evening to keep our relationship alive across time zones and despite my family’s pressure. I simply would not indulge their narrow-mindedness. I would say, I am not that way. I am smarter, I am more modern and therefore I am right, I thought, failing to understand then that I was only any of those things because of them.

Faced with my stubborn will, my parents turned back to their astrologers. “What should we do?” they asked.

As it turns out, there was one imperfect solution: a “kumbh vivah.”

You guessed it. It’s the pot marriage.

Kumbh vivahs are still quite common among Hindus in India. Even the former Miss World and Bollywood megastar, Aishwarya Rai Bachan, is rumored to have gone through the ritual. (She, apparently, married a tree.) In Amazon’s 2019 Indian series “Made In Heaven,” there is an entire episode dedicated to this phenomenon. The couple in that episode, like me and Mr. Salt and Pepper, are also modern and Western-educated, struggling to align their views with the more archaic views of their families.

That it is mostly manglik girls that are expected to participate in this ceremony, which many have argued places the burden on women to fix astrological defects — no matter your views, that’s a herculean task, to say the least — was part of my resistance to it.

But at the end of the day, I wanted my parents to be happy for me and I wanted our relationship to heal. They wanted me to be safe from heartbreak.

So, on the established date, I sat in a temple in Hong Kong. There was a pundit reciting mantras, and while my parents sat cross-legged near me, I held Mr. Pot in my hands.

When the prayers ended, we stood up together, and walked outside the temple to a quiet, deserted space.

And then I smashed my new husband into the ground, shattering him into tiny pieces. The thinking is that the pot stands in for my husband, the one with which things are destined to go awry, and breaking it symbolizes the end of that ill-fated relationship. Ostensibly, the curse was lifted.

Eight months later, I married Mr. Salt and Pepper under the blue skies of Bali, surrounded by gleaming family and friends. We walked around a fire, we exchanged vows and danced all night. Most important, my parents delightfully embraced my husband. They were all in.

This union, it turns out, was not the break from tradition we all anticipated; this is not a tale of patronizing Orientalism, overcome. The last thing I want is to reinforce any stereotypical imaginings of India as a land of elephants and snake charmers and women who marry trees.

No, the story of my pot and me is one of respect. For myth, for belief, for culture and ritual and history, those ineffable things that swirl through generations, tying us to who we are as individuals. It’s a story of what unites us: hopes, fears, passions and the past, all pushing us to find our safety nets.

Will I expect my future children to marry a pot? No. But in my doing so, did my parents rest better knowing that they fulfilled that universal urge of fiercely protecting their offspring in the best way they know? Yes.

And I’ve been happily married for four years. Make of that what you wish.

23 Fine Jewelry Brands Worth Investing In

SSENSE Is Now Selling Lifestyle Goods With ‘Everything Else’ Launch