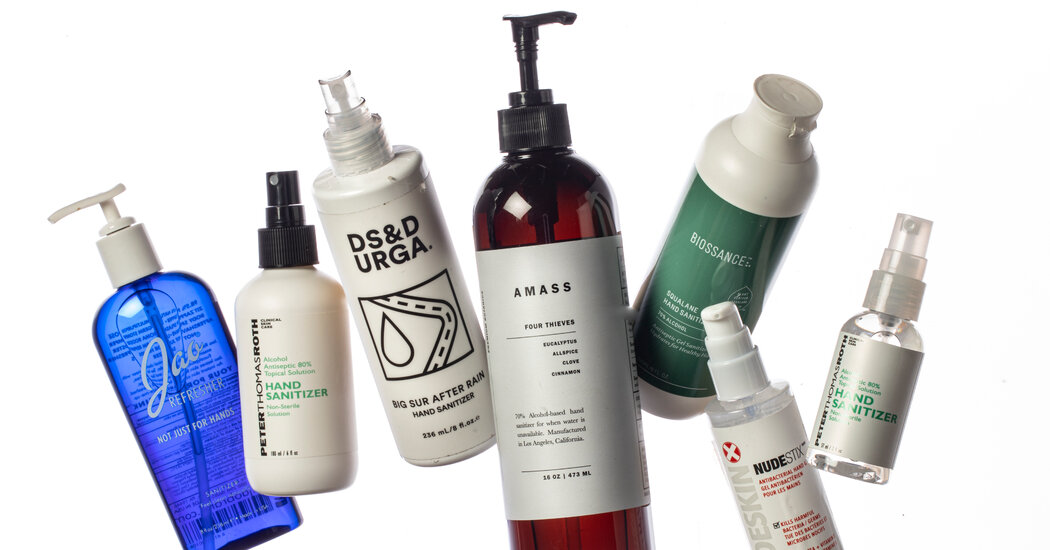 At Cecconi’s in the Dumbo neighborhood of Brooklyn and in West Hollywood, Calif., diners are offered more than a grind of fresh pepper or a spoonful of grated Parmesan with their meal.

On many tables, where you may expect to find a bottle of olive oil or hot sauce, there’s Amass Botanic Hand Sanitizer, a spicy-scented cleanser to keep the restaurant’s guests germ free.

The product is one of a new crop of upscale hand sanitizers, frequently formulated with refined scents and emollients. Like the standard versions, these have an alcohol base but aim to offer a more indulgent experience than, say, a smear of Purell or a quick rub with a disinfecting wipe.

“This is becoming a quotidian ritual for people, an everyday thing that’s part of their lives,” said Morgan McLachlan, a founder and the master distiller at Amass, a Los Angeles company that focused on spirits before it began producing hand sanitizer in March. “Why not have it be a pleasurable experience?”

The company’s Botanic Hand Sanitizer is a light liquid that, if poured into a glass, could be mistaken for gin. The spicy scent, called Four Thieves, is redolent with clove and cinnamon; it brings to mind a wintry fruitcake. The name and formula were inspired by medieval criminals who, according to legend, avoided contracting the bubonic plague by anointing themselves with a similar blend of botanicals, Ms. McLachlan said.

A second scent, an herbaceous blend called Basilisk Breath, was introduced on July 16.

Beauty brands are also introducing hand sanitizers. Biossance, a popular skin care line, came out with one last month with moisturizing squalane. The Brooklyn fragrance house DS & Durga added one with a eucalyptus-based scent to its collection in April.

Predictably, these elevated products come with a commensurate price tag. At $12 for a two-ounce bottle, the Amass hand sanitizer costs about eight times as much as a purse-size hand sanitizer at CVS. On the other hand, Augustinus Bader, the cultish German line that includes a $165 body cream, has, since May, been offering a limited supply of the hand sanitizer it created for front line workers to consumers for free, for a small shipping fee.

Higher prices haven’t necessarily deterred shoppers. March and April sales of Jao Brand’s Refresher hand sanitizer, which was introduced in 1997 and costs between $10 and $18, depending on size, exceeded those for all of last year, according to a representative of the brand. (Admittedly, one factor of high sales could be the low supply, at least early in the pandemic, of traditional hand sanitizers, although some high-end brands have also sold out of these products over the last couple of months.)

The Centers for Disease Control and Prevention, recommends a minimum concentration of 60 percent alcohol in these products; in upscale versions, that percentage is often much higher.

“The higher the concentration, perhaps the more effective, but it’s more damaging to the outer skin layer,” said Dr. Joshua Zeichner, the director of cosmetic and clinical research in dermatology at Mount Sinai Hospital in New York.

“That can lead to cracks in the outer skin layer, loss of hydration and inflammation,” he said. Moisturizing after use is advised.

Of course, simply decanting basic hand sanitizer into a fancy container can make it feel more glamorous. Early this month, sleek sanitizer dispensers in polished steel were installed in the Tom Ford Madison Avenue boutique. They were created by Pureté System, a new brand founded by Jonathan Reed, who also runs a company that produces physical and digital events.

One of the receptacles, a shiny silver box filled with disinfecting wipes, looks like a designer take on a package of tissues. Another, a narrow tower that dispenses squirts of sanitizer, could be a luxurious water cooler.

Their aesthetic is, of course, more in sync with the boutique’s grand black staircase and marble detailing than, say, the packs of cleaning products at the Duane Reade a couple of blocks away.

Mr. Reed said that other high-end stores are interested in using the dispensers, which are designed to use with a variety of sanitizers. He added that Pureté System’s own line of hand sanitizer, scented with white musk and rose, will be introduced in the next couple of months.

The new company’s goal, he said, was to offer a sophisticated way to incorporate something that’s now part of everyday life.

How to Create the Perfect Table Setting, According to the Experts