For some years now, the fashion industry has been in the crosshairs of the climate change movement. The charges against it are wide-ranging and grave; everything from its use of animal skins, to its carbon emissions, to its habit of burning excess stock, to a culture of excessive flying and waste have been cited by activists and insiders alike.

The statistics certainly back it up: it’s estimated that garment manufacturing accounts for between 5 and 10 per cent of manmade CO2 emissions, that 85 per cent of all textiles end up destroyed or buried in landfills, and that fashion produces about 20 per cent of global waste water. Such facts are undeniable, embarrassing, a dark stain on the very nature of the business.

This week saw an arresting protest aimed right at the heart of the industry: London Fashion Week. Demonstrators from environmental group Extinction Rebellion carried out what they called a ‘die-in’, and a ‘funeral for fashion’, right outside the main hub of the events.

They glued themselves to doors and covered themselves in blood, they laid down on the street, they held signs with slogans like ‘dump leather’. By the looks of it, many did their best to ignore them.

Initially, ER’s plans were even more disruptive; they had petitioned to shut down fashion week altogether (and not in the way Skepta did) and hold a people’s assembly on climate change instead.

Their public statements on the issue are similarly radical; their ‘boycott fashion’ campaign urges the public not to buy any new clothes for an entire year, instead using the existing surplus of garments and textiles on the planet. An idea that probably won’t fly too well with the bigwigs on the second row, trying to convince people to shell out for capsule collections and diffusion ranges. Extinction Rebellion’s aims are certain, but their targets seem less so. Does protesting at London Fashion Week – which is predominantly a showcase for designers that (Topshop and Burberry aside) make small batches of highly exclusive clothing – really make sense when Primark is just down the road?

Or is it better to aim for the head of the industry so to speak, to make a statement that really hits the higher echelons of the trickle-down system, rather than staging just another high street protest?

Previous efforts from protest groups would point towards the latter. Convincing the public to move away from fast fashion has been a difficult endeavour. The crimes of the industry are well-understood now, yet people still engage in unsustainable shopping practices in their droves.

Are they all heartless climate-heaters? Or is it more likely that they have nowhere else to buy?

Extinction Rebellion are right in that we should wear clothes longer, that we should reinvent them, bring them out from the back of the wardrobe, share them with others. But these days, not everyone has the privilege of clothes that last. 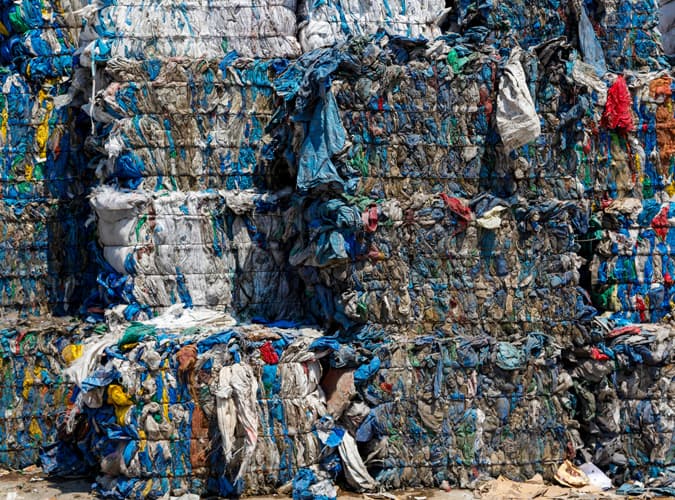 Much of the discourse around combatting fashion waste over the last decade or so has centred around the concept of ‘quality’; encouraging people to buy durable, well-made, more expensive pieces in order to stop the high-street hauls.

And while that’s all well and good, the fact is that in austerity Britain, many people simply don’t have the capital to invest in quality clothing. Living hand to mouth – as many people do – forces you to shop in the immediate, whereas a bit of money in the bank affords the ability to buy in the long-term.

A lot of people in the UK and around the world are tied into a deal with the devil when it comes to fast fashion, they have to buy cheap, the clothes fall apart quickly and then they’re forced to buy again, and again.

Quite simply, many people’s wardrobes just aren’t repurposable, adaptable, durable. They’re barely serviceable as they are. And ER’s calls to adopt this way of wearing can come across as slightly blinkered, especially from a movement that has already come under fire for being middle class and not-particularly-busy.

Although, at the bottom of their call to arms – to ‘boycott fashion’ – comes a slightly more achievable plea to adopt a slow fashion approach, suggesting they seek out the most ethical and sustainable versions, or second-hand clothes.

Clearly, most of the waste and emissions comes from the high street and the online sector, rather than the young people cutting away in Seven Sisters warehouse live/workspaces. But that doesn’t mean that high-end fashion doesn’t have culpability here. For a start, there’s the increasing amount of collaborations with the town centre behemoths that are becoming the financial lifeblood of the industry, then there’s the open secret that some trendy young designers will gladly use what are ostensibly sweatshops in developing nations to cut costs.

Not to mention stylists that will have entire collections flown across the world on a whim, and that in London, it’s Addison Lee, not TFL that seems to get the workforce around.

Then there is the responsibility of trend-setting. Real fur has long fallen out of fashion (in London at least), but materials like denim, leather and plastic are just as environmentally challenging – and all very easily brought into fashion by trend-setting designers. Take your favourite denim – it’s estimated that one pair of jeans takes around 10,000 litres of water to produce. Something to think about next time it’s ‘having a moment’. LFW has a sustainability programme and accompanying show, but really, it does seem like a somewhat of a backwater, a minor concession to a major issue. Designers might make public statements about climate change, magazines might put Greta Thunberg on the cover, but is anyone really making the effort to change?

The answer, on a surface level at least, is yes. Gucci is making its shows carbon neutral from now on, Stella McCartney is partnering with Extinction Rebellion and even Zara is pledging to make all its products from sustainable materials by 2025. The tide seems to be changing, but how much of it is statement, and how much is tangible change?

And how sustainable can a culture that changes itself every season really be? The answer remains to be seen.

The fashion industry will always be built on excess, whether that’s aesthetically or industrially. But the wider movement towards sustainability is making waves. Perhaps an interesting parallel is that of PETA’s headline-grabbing, red-paint throwing anti-fur exploits. To many at the time, they were crude, rude, uncouth. The work of wild hippies who had no respect for glamour and artistry. But in time, fur fell out of fashion.

Extinction Rebellion might not get people to stop buying clothes, but they might just plant an idea.

The Best Medium-Length Hairstyles For Men 2020