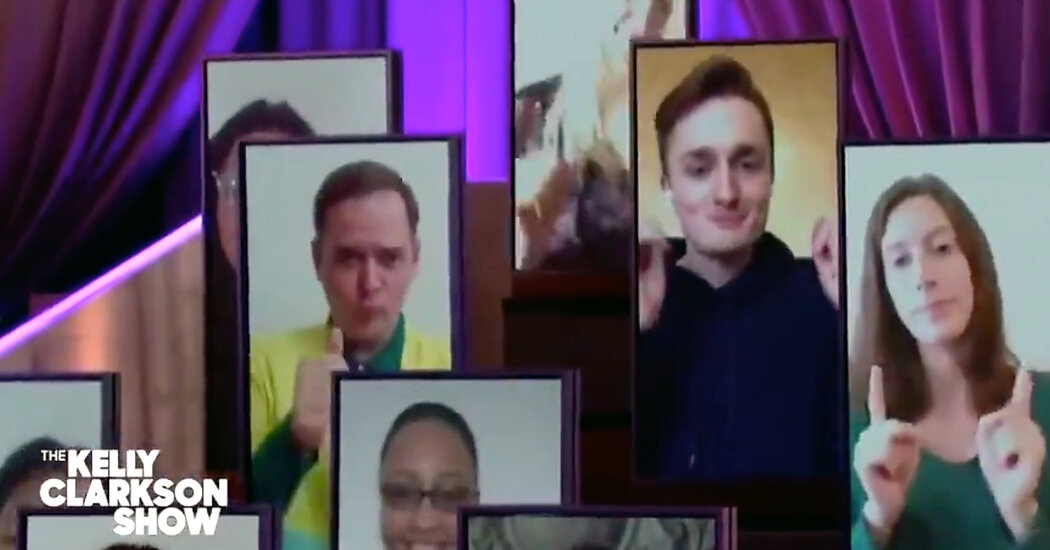 There are many uncanny elements to life during the pandemic, though many of them (Zoom classes, FaceTime births, D.J. sets on Instagram Live) have become almost normal over the last six months. The virtual audience thing, however, is still a work in progress.

Sports arenas and TV studios have tried to recreate the experience of live viewers by putting cardboard cutouts, stuffed animals and even plants in stadium seating. It continues to look odd.

Still, nothing beats the out-of-sync dancing of the digitally beamed-in audience of Kelly Clarkson’s daytime talk show, when exposed on Sept. 23 to the mesmerizing sounds of Vin Diesel’s first single, “Feel Like I Do.”

The live audience appeared on rectangular screens held up by plinths, only the top halves of their bodies visible, leaving Ms. Clarkson surrounded by a phalanx of swaying busts, as if a gallery of Renaissance portraits had come to life.

Some individuals nodded their heads. Some rocked gently side to side. A few barely moved at all. The camera swept across them, lingering for a few seconds on Mitchell Roehl, a 21-year-old student at the University of Wisconsin-Milwaukee, who snapped his fingers and grooved to the rhythm with an intensity shared by few of his fellow dancers.

“I never thought that a video of me dancing to some random Vin Diesel song would be my Twitter moment,” Mr. Roehl said by phone this week. “But here we are. 2020!”

His journey to “The Kelly Clarkson Show” began when he contracted Covid-19 in September. Isolated at home, he began applying to be a virtual extra on shows including “The Voice” and at N.B.A. games. “Why not?” he asked himself. “Like, it’s fun. So let’s do it.”

Mr. Roehl is studying public relations at his college, so he was interested in seeing how these types of shows are filling up their audiences at this point in the pandemic. He described signing into an app called 1Iota in order to attend “The Kelly Clarkson Show,” and then listening as a producer introduced the Vin Diesel segment and instructed the audience members to dance along.

“We couldn’t see ourselves or anything,” he said, of the other audience members. “I was just like, I’m just going to vibe and have fun, as I would if I was trying to bring the vibe up at one of my friends’ houses.”

A few days later the clip was broadcast, and a friend sent Mr. Roehl the tweet that was going viral.

“I guess I really stuck out because I feel like I was one of the few people in the video that was, like, actually having fun,” he said. “Just enjoying it. Everyone was so awkward!”

“That’s my whole 2020 mantra, that you just have to enjoy stuff because so many things suck in this year,” Mr. Roehl added.

Part of the humor of the clip is imagining the behind-the-scenes decisions that led to the studio setup. NBC, the network that broadcasts the show, is betting that its at-home viewers, on-air talent and, presumably, advertisers would prefer a ludicrously distanced audience to none at all.

Entertainment institutions are desperate to recreate experiences that scan as normal, but they sometimes miss the mark. The humor is heightened further by the morbid reality lurking beneath: The show must go on, even when audiences have to be isolated from the host, the crew and each other to avoid any unnecessary human contact amid a pandemic.

“Like, what is this, ‘Black Mirror’?” Mr. Roehl asked, rhetorically.

It’s also impossible to watch the clip without being reminded of the extent to which participating in society now entails, more often than not, floating in a virtual tank with a bunch of other disembodied heads. The clip’s viral afterlife strangely echoes what takes place within it: Here we are, sharing the video on Twitter and Slack, another captive audience in our discrete boxes, smiling and laughing at the on-screen action.

“We never thought that we would be living in a time like this,” Mr. Roehl said. “We’re turning into the world that we never thought it would be. It’s kind of crazy!”

Trust Me, COS Has the Best Collection Of Summer Dresses

At the Row, a Surgical Precision