Skip to Content
Home / Fashion / Why D.C. Rioters Wore Costumes to the Capitol 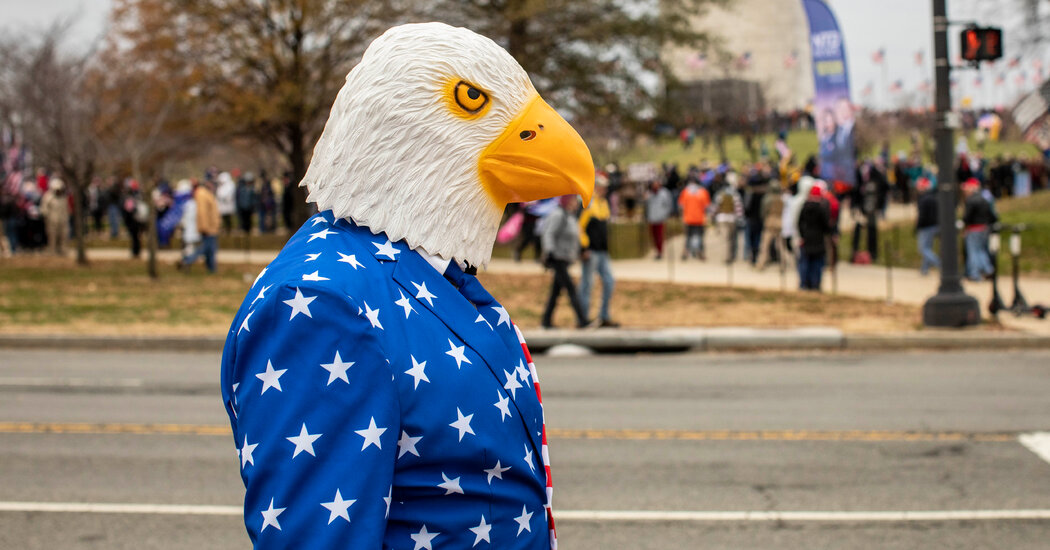 They came dressed for chaos. They came in red, white and blue face paint and star-spangled superhero outfits, in flag capes (American, yes, but also Confederate and Trumpian) and flag jackets and Trump bobble hats. One man came as a patriotic duck; another as a bald eagle; another as a cross between a knight-errant and Captain America; another as Abraham Lincoln. They came in all sorts of camouflage, in animal pelts and flak jackets, in tactical gear and even a sphagnum-covered ghillie suit.

They came Wednesday morning first for the pro-Trump rally outside the White House, to show their fanatic belief in the spurious “Stop the Steal” movement on the day Congress had convened to certify the Electoral College results and recognize Joe Biden as the winner of the 2020 presidential election, and they turned into a mob.

What rioters wore when they stormed the United States Capitol, pushing past the Capitol police and rampaging into the building, may seem the least of the matter. It may seem entirely irrelevant to the unprecedented nature of the moment. Yet these choices also helped feed the frenzy of the event, as the pageantry of aggression turned actual.

Protests have always had a distinguishing uniform — it is how often disparate individuals signal their shared purpose and state of mind — but this time the cohesion splintered into war paint and a primal scream of patriotism. It was a riotous expression before the riot began.

Forget the white trouser suits and pink pussy hats of dissents past; they were positively quotidian in comparison. Instead there was clothing that transgressed the conventions of the social style contract just as the president’s accusations transgressed political convention. Clothing that didn’t really qualify as clothing, but made the leap into costume of the most big screen blockbuster, shoot-’em-up video game kind. Or the VR kind. Only this wasn’t virtual reality; it was reality.

When you leave the totems of your usual identity behind you free yourself from the laws that govern that identity and assume those of another character — a frontiersman, a hunter, a warrior, even a superhero — that can then be twisted through a dark mirror into the outfits of the insurrection. There was no clearer image of what that meant than a shirtless man in what looked like a cross between a coonskin cap and a horned spirit hood, with face and body paint, standing gloating behind a desk in the Senate chamber as if he belonged there, after the actual elected lawmakers had been rushed away for their safety.

As the writer Ben Sixsmith tweeted: “It’s like the Storming of the Bastille as recreated by the cast of National Lampoon’s Animal House. These photos will outlive us all.”

It was as if normal dress — jeans, T-shirts, sweaters, puffers — couldn’t contain the extremity of the outburst. It needed to be expressed in out-there clothing, clothing that demanded attention, clothing you couldn’t ignore, clothing that refused to play by the rules because the whole point it was telegraphing (the point the president was making) was that the rules couldn’t be trusted; instead they needed to be shredded, torqued into some sort of fantasy he-man form.

At first, when the rally began, the ersatz outfits seemed as if they were meant to be humorous. What better way for those in attendance to distinguish themselves from the Washington establishment they saw was the enemy (as they had been told by Mr. Trump) than to reject, in the most absurdly visual ways, the uniform of that establishment? In the Capitol building Nancy Pelosi may have been wearing a sapphire blue dress, and most senators and representatives may have been in dark suits, but on the streets the president’s supporters was leaving propriety behind along. Some even left their shirts behind too (others wore message sweats telegraphing “Civil War”).

Somebody who had been hiding under a rock could have been forgiven for thinking that they had wandered into a postponed Halloween parade, not the beginnings of an out-of-control melee egged on by a sitting president.

Except that, as became increasingly apparent, there’s a fine line between comedy and horror (just ask the clown community or the Joker), and disguise has its own dark history, from the Klan to John Wayne Gacy. One rally attendee, wearing a cuddly flag onesie, was also toting a poster comparing New York Governor Andrew Cuomo to Josef Mengele.

Earlier in the day, before Mr. Trump struck the oratorical match that turned the rally into a riot, attendees in what appeared to be ecclesiastical robes seemed to be bestowing a blessing on the whole event. As far as an observer could tell, however, no one was garbed as the better angels of our nature. License to dress up can easily become license to act out in the worst of all ways. On Wednesday, it did.