Powerful US and European fashion companies have refused to pay overseas suppliers for more than $16bn (£12.3bn) of goods since the outbreak of Covid-19, with devastating implications for garment workers across the world, according to analysis of newly released import data.

Two US-based groups, the Center for Global Workers’ Rights (CGWR) and the Worker Rights Consortium (WRC), used previously unpublished import databases to calculate that garment factories and suppliers from across the world lost at least $16.2bn in revenue between April and June this year as brands cancelled orders or refused to pay for clothing orders they had placed before the coronavirus outbreak.

This has left suppliers in countries such as Bangladesh, Cambodia and Myanmar with little choice but to slim down their operations or close altogether, leaving millions of workers facing reduced hours and unemployment, according to the report.

“In the Covid-19 crisis, this skewed payment system allowed western brands to shore up their financial position by essentially robbing their developing country suppliers,” said Scott Nova, director of the WRC and co-author of the study.

The report argues that the pandemic exposed the huge power imbalance at the heart of the fashion industry, which demands that suppliers in some of the poorest countries in the world bear all the upfront production costs while buyers pay nothing until weeks or months after factories ship the goods.

Despite leaving suppliers and workers facing ruin, some retailers have paid out millions in dividends to shareholders. In March, Kohl’s, one of the US’s largest clothing retailers, paid out $109m in dividends just weeks after cancelling large orders from factories in Bangladesh, Korea and elsewhere.

In an open letter published in April, the Garment Manufacturers Association in Cambodia appealed to buyers to honour their contracts to protect the 750,000 workers who rely on the Cambodian garment industry. 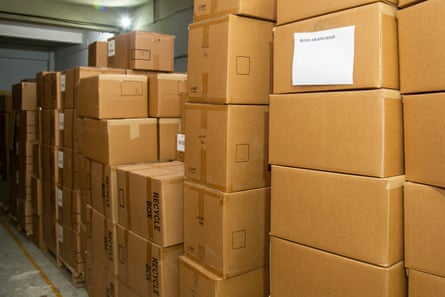 “All parties in the global apparel supply chain are feeling the extreme burden caused by Covid-19,” the letter said. “However, manufacturers [factories] operate on razor-thin margins and have much less ability to shoulder such a burden as compared to our customers [buyers]. The consequential burden faced by our workers who still need to put food on the table is enormous and extreme.”

In Bangladesh, more than a million garment workers have been fired or furloughed as a result of cancelled orders and buyers’ refusal to pay, according to the CGWR. Despite a government package of more than $500m to factories to help mitigate job losses, Bangladeshi workers have reported not being paid for two months or more.

Prof Mark Anner, director at the CGWR and lead author of the study, acknowledged that apparel companies had taken a financial hit due to the Covid-19 crisis but said they must face their financial responsibilities.

“While their economic position at the top of supply chains gives them the power to renege on what they owe suppliers during a crisis, they have a moral obligation to protect the most vulnerable … and that begins with protecting the wellbeing of the workers at the bottom of supply chains.”

In an effort to hold brands and retailers to account, the WRC and CGWR launched a Covid-19 tracker in April to monitor whether companies are meeting their contractual obligations. Topshop owner Arcadia Group, Walmart, Urban Outfitters and Mothercare are listed among those which have made no commitment to pay in full for orders completed and in production.

In contrast, said WRC’s Nova, a substantial number of big brands and retailers including Gap, H&M and Zara have reversed course and are now fulfilling their financial obligations to suppliers following pressure from worker organisations and media coverage.

Collina Strada 2020: Finally, Someone Made a Fashion Week Video That Feels Like a Ketamine Trip on a Farm!

What to Expect from Jacket Required 2020