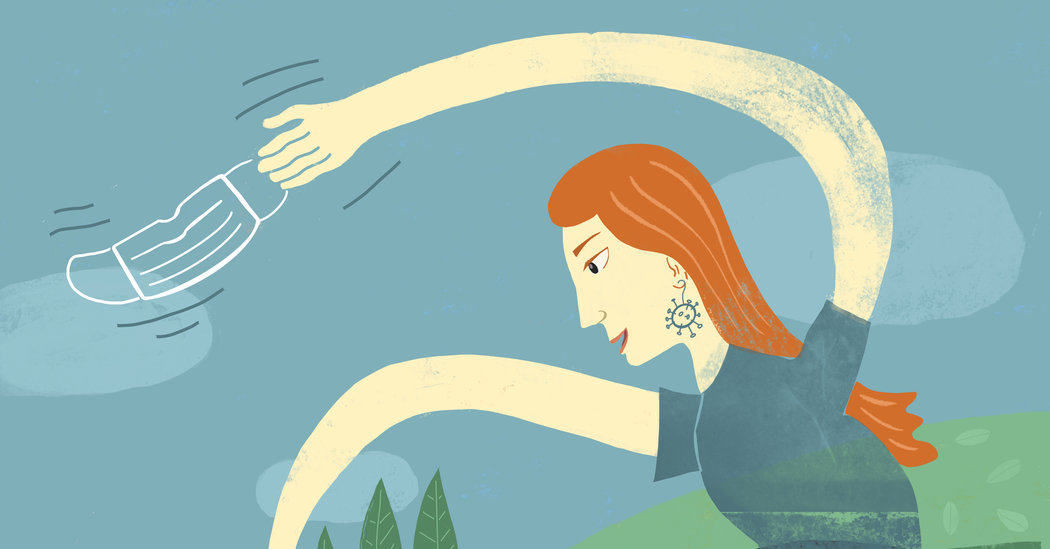 I like people. I sort of like cooking. Historically, this has all added up to an interest in entertaining that would not be called passionate but could certainly pass for healthy.

When people start talking about what we miss, what we want to “add back” when everything returns to “normal,” I think to myself: movies, getting a drink in a crowded bar, going places for fun, yes, all that, assuming there’s a world left.

But when I imagine entertaining — having people inside my house and telling them things, listening as they tell me things, conversation, I believe it’s called, taking care of their needs, impressing them, getting jokes, making jokes, saying stuff like, “Wow, are these … ice cubes?” — it seems to involve more financial and emotional security than I plan on being able to project, well, possibly ever again.

This is not about not cooking. I actually cooked so much during the last four months that perversely I started to like it more and more rather than less and less. Cooking — sincere apology to people who have children — has been one of the only ways for those of us who are underscheduled and underemployed to put punctuation into our days.

Never before has it been such a friend to me, one whom I greet daily with kind tenderness: Hello, cooking. How are you? You look nice today. What a lovely, simple outfit you have chosen of socks and loose pants.

Whereas if entertaining were to get dressed it would — actually, I have no idea what it would wear because it’s just taking too long to decide, not that I don’t have the time, but just who cares what entertaining wears.

The last time someone came over for dinner was March 8. It was a close friend, and he comes over all the time. It wasn’t a high-pressure situation. I put some premade rub on a pork loin and cooked it with some extremely small potatoes, all food, zero showing off.

I was very anxious about the coronavirus at the time. I was probably in the midst of reading an 1,800-word article about how some doctors thought you could get coronavirus from passing someone on the freeway if your window was down and so was theirs and you sucked in a breath of surprise at the same time they coughed if you were driving between three and five miles per hour faster than them, or maybe I was reading the article that came out the next day refuting this claim but saying maybe don’t do it anyway, just to be safe.

I cooked the pork way too long, and it was edible but far from delicious. Also my boyfriend hadn’t told me our friend was coming over, and the only exciting thing about the meal were the potatoes, which were truly minuscule and everyone maybe got three. The salad was probably fine. But other than that the meal was terrible, and I felt deeply sad about this.

In retrospect, this was the night where I was really starting to comprehend not only that no one was coming over for dinner for a long, long time, but that something huge and terrible was about to happen, with no end in sight. I put all this sadness and terror into the ruined pork, which, in retrospect, was not the worst place for it.

I cried while both men just stared at me with that expression — you know the one! — that says both, “I truly feel sorry for you” and “If I stare at you long enough, will you just stop crying? That would be amazing.”

And so then there were many weeks when basically no one came by at all, and if people came over they stood on a piece of tape on the stairs indicating where we were comfortable having them stand while wearing a mask while we stood in the doorway wearing a mask.

(Yes, there was a piece of tape on our stairs. It’s because one night a friend of ours came over with his girlfriend and my boyfriend went out to meet them and stood in the doorway and I thought they were too close and I screamed at him, “I am not going to die just because you’re too nice to ask anyone to stand on the lower stair,” and then we screamed at each other and didn’t speak for several days. The tape was there to ensure that this incident would just be a one-off.)

I knew the facts: that my chances of dying from Covid-19 were statistically low. But when I heard the news about overflowing waiting rooms in Spain and Italy, and patients not much older than me (I’m 50) left untreated because of lack of resources, along with the news, more staggering every day, that the United States was wholly unprepared for all this, I went into an unceasing, weekslong panic.

Meanwhile, cases in our rural mostly white county of about 100,000 were hovering near 40, with one death. I was forced to admit the terror I felt for my own safety was perhaps overblown and even selfish. The people getting sick were, for the most part, people who had to go to their jobs, or were in nursing homes, or were in jails and prisons and did not have the luxury of cowering in their bedrooms like me. Obviously I was at risk of getting Covid-19. We all are. But I couldn’t go on like this.

So we started having people over, outside.

She brought her own drinks and her own food. We did not go near each other. She relieved herself in a cozy grove of cedars that we named the facilitrees. It was just like having someone over except that I didn’t do anything for her at all, unless you call spraying down a chair with Lysol and putting it outside doing something.

“Is this boring?” she said after talking about some guy for an hour. “Please,” I said. “Not in the least.” What could be less boring than hearing someone other than myself complain, especially a young person, with problems I remembered having but was relieved to not have anymore. Usually I’d be like, “Get rid of that guy, now.” Instead I said: “Oh well. Guys.” As long as we’re throwing hospitality in the dustbin, why not throw advice in too?

We also did lot of staring into space.

By the middle of May, my boyfriend and I had branched out a little from total self-service, giving people seltzer or beer in a can of if they wanted it, and the porch was generally open for business, for two people, max (the tape fell off when it rained, and any screaming events have been because of other things), who could just text and show up.

Now there have been just around 140 cases in our county. This weekend our governor was like, “Please don’t have parties,” to which my response was: Dude. You do not have to worry about me having a party, I assure you I won’t feel like having a party for at least 10 years.

But I still like people. So if anyone at all wants to swing by and sit in a chair on my unmowed lawn, I’m flattered. I can’t promise to be any fun, and in fact there’s a good chance I will be tedious verging on huge bummer.

That said, I like to bring a friend a beer or a seltzer wrapped in an antiseptic wipe and sit six feet away, and I like, as much as I like anything right now, to stay there for as long as they can stand me.

Sarah Miller is a writer in Nevada City, Calif.