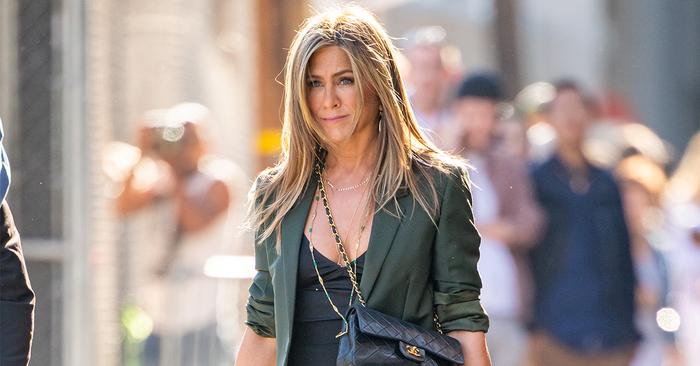 Jennifer Aniston first hit the fashion industry’s radar over 25 years ago playing style-devotee and veritable ’90s icon Rachel Green. And although over two decades have passed since Friends first aired, Aniston’s style is more relevant than ever. The actress has been promoting her new Apple TV+ series, The Morning Show, alongside co-star Reese Witherspoon, and luckily for us, this has resulted in so many new outfits we can examine.

If there’s one thing we’ve noticed from observing decades of Aniston’s style, it is that Jen is certainly a creature of habit. The star picks a style or aesthetic that suits her and wears it again and again and again. I’m always a fan of an “if it ain’t broke, don’t fix it” mentality.

Aniston tends to wear head-to-toe black, and while one might be inclined to think this results in predictable looks, the actress’ recent appearances are proving anything but. For the show’s premiere, Aniston wore a black vintage gown by James Galanos and was also spotted in a strapless black number from Prada’s autumn/winter 2019 collection for her segment on The Late Show With Stephen Colbert.

However, Jen’s most accessible monochromatic moment (and the look we’re ready to copy) was when she wore a lace-trimmed black slip dress underneath a structured black blazer, finishing the look with a pair of black sock boots. It was classic, timeless and might just be exactly what I wear for every party this December. Keep scrolling for more all-black outfits inspired by our favourite fashionable friend.

How To Dress With 60s Swagger