You’d think our taste buds would be trend-proof, that our appetites are immune to the passing whims of experimental chefs. Foods aren’t fads. Except… some of the tastiest plates from recent years definitely started out that way. Gourmet burgers, Korean BBQ, small-plates everything – they all mushroomed from trendy restaurants in trendy quarters of trendy cities.

Which begs the question: what are the taste-makers cooking up next? These are the finger-licking food trends whetting our appetite this year.

While Filipino food is extremely popular in some places – most notably the USA and, well, the Philippines – it’s taken the UK a surprising amount of time to wake up to this interesting hybrid of Spanish, South American and Asian flavours. As such, it’s ripe to become “the next big thing”: familiar ingredients (and a heavy dose of crispily cooked pork) and familiar flavours, just in combinations most people probably hadn’t contemplated before. 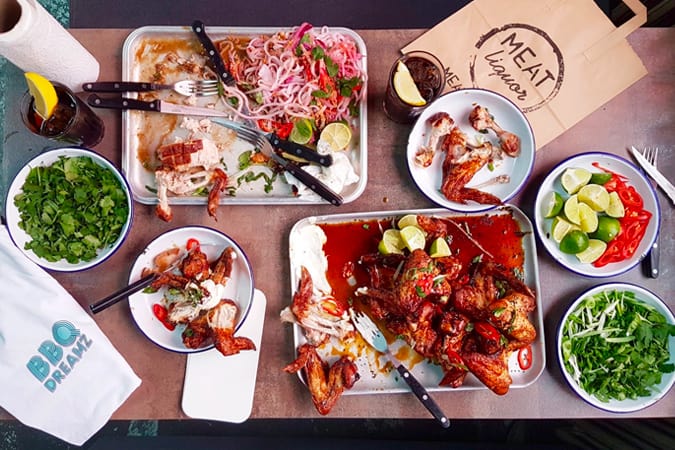 BBQ Dreamz, which rose to fame on the BBC’s Million Pound Menu, can be found at John Lewis Oxford Street throughout the summer of 2019, while Sarap, under the guidance of chef Budgie Montoya, has recently spun its acclaimed Soho pop-up into a longer summer gig in Brixton Village. Kain tayo! While the debate rages on whether vegetarianism and veganism will save the planet (short answer: no it won’t but at least it’s got people talking) many are switching to a more plant-based diet. Even if it’s only for #MeatlessMonday.

And it doesn’t have to be all leafy greens, either. Temple of Seitan, with Hackney and Camden locations, do mouth watering fried “chicken” without the guilt (ie fried plant-based junk food). Add chips and gravy, it becomes the perfect end-of-night food for vegans on the town.

The Vurger Co.’s plant-based burgers are packed full of your five-a-day, made from 100% vegetables, seeds, nuts, grains and legumes, and believe us when we say they don’t compromise on flavour. Pizza Pilgrim’s £5.50 Marinara pizza is made using 100% all-vegan ingredients, combining tomato sauce with olive oil, garlic, basil and oregano on a fluffy Neapolitan base. It’s low on calories too, so you can gobble without the guilt.

At previously carnivore-attracting establishments like M Victoria (the creation of former Gaucho supremo Martin Williams), Jidori and 100 Wardour you’ll find vegan menus alongside traditional offerings. Even in Paris, a city where vegetarianism used to receive blank looks and an offer of chicken (because pigs don’t have wings, that puts chicken on a par with a carrot), there’s been a huge rise in vegan restaurants: Le Potager de Charlotte, the Hank Group (Hank Burgers and Hank Pizza), and 42 Degrés, which won’t cook anything above that temperature as their chefs believe that’s the point nutritional value falls. Every year, when people are asked to suggest food trends, the subject of insect protein comes up. While it sounds like something out of a reality TV challenge, there’s considerable logic behind it: with a growing population, how do we feed the entire planet? Also, many regions – South East Asia in particular – already consume insects, it’s just us in the west that seem squeamish.

You can sample such delights at Lao Café in Covent Garden – a spin off from the ever-expanding Rosa’s Thai Café chain – with Malang Tod, a side dish of, basically, herbal fried bugs of the day.

At Pembrokeshire’s Grub Kitchen, the restaurant of local visitor attraction The Bug Farm, you can enjoy cricket and chickpea falafels, a signature Grub Burger (toasted crickets, mealworms and grasshoppers) or even a Sunday lunch of Bug Wellington. Date night, anyone? Since before Sandor Katz put pen to paper and reinvented fermenting to a hipster generation, pickling and preserving have long been an essential part of the world’s eating habits. Key elements of Asian cuisines are pickled or fermented – Japan’s (slightly challenging) fermented soybean natto, for example, or Korea’s kimchi – while even the least adventurous of us has probably enjoyed a gherkin with fish and chips.

Post Katz, however, chefs – and brewers – have taken things to a whole new level, such as at Jacob’s Pickles in New York, where, as the name suggests, pickled items play a major part in their Southern US-style comfort menu. Or London’s The Good Egg, where walls lined with jars of interesting fermented vegetables and shrubs – think drinking vinegars – are the order of the day. On a connected note, in Berkeley, California, the Rare Barrel brewery focuses solely on sour beers (made by intentionally allowing wild yeast strains or bacteria into the brew), often to quite brilliant effect. From embracing paper straws to transforming scraps into delightful dishes, some of the most hyped bars and restaurants have turned zero-waste into a “less is more” food trend. Good thing, since a third of all food grown or manufactured in the world is thrown out – enough to feed 870 million people.

Brighton’s trendy Silo restaurant has successfully eliminated waste by composting every scrap and piece of leftover food directly on-site, foraging local ingredients, up-cycling and repurposing everything down to the chairs. They even crush all waste glass for their local potter to make into ceramics. A leader in the eco-friendly food movement, Daylesford Brompton Cross celebrates a zero-waste policy, ensuring packaging is recyclable, reusable or compostable, and no food is thrown away. Any extra food is sent to The Felix Project, who redistribute it to those in need around London, while straws are made from wheat stalks and customers are encouraged to bring their own reusable cups.

London pizza restaurant Homeslice is working to minimise its ecological impact by shunning cutlery – it’s pizza, use your hands! – while all the plates used across their six sites are compostable with food waste, thus reducing the need for detergents. At Temper, Neil Rankin’s London group of whole animal barbecue restaurants, they’re attempting to use every part of the animals consumed and eliminate factory farming. Chef proprietor Rankin uses only small UK farms as suppliers and trains his chefs in butchery.

Carcasses are received whole and broken down in house and, where possible, every part is used. Beef fat, for example, is used in their homemade tortillas and butter. Bones are used to make stocks. Unpopular cuts go to Cobble Lane Cured to be turned into charcuterie. They even supply hides to a company making shoes and bags. In New York, restaurants such as Ancolie – certified carbon neutral – and Maman, which converts its coffee grounds into soap, are ploughing similar paths.

With a large percentage of millennials not drinking (possibly due to cost, possibly due to health reasons) the range of low alcohol (under 0.5%) and zero alcohol drinks has increased over the last couple of years. The quality of these has soared too: many low alcohol beers now have decent mouthfeel and viscosity and aren’t quite the “beer cordial” they used to be.

In line with this trend, many restaurants now offer alcohol-free drinks pairings. Noma was one of the first to do this, with a juice matching to their acclaimed tasting menus, but many others are pushing the same envelope, such as Trois Mec in Los Angeles – where you’re likely to find dishes twinned to house-made drinks such as Faux Sake or Celery Limeade – and South Melbourne’s Lûmé who match dishes to drinks such as the Coco Shake, a blend of coconut, pandan leaf and affron, or Eugenol, made with apples, mountain marigold and cardamom. 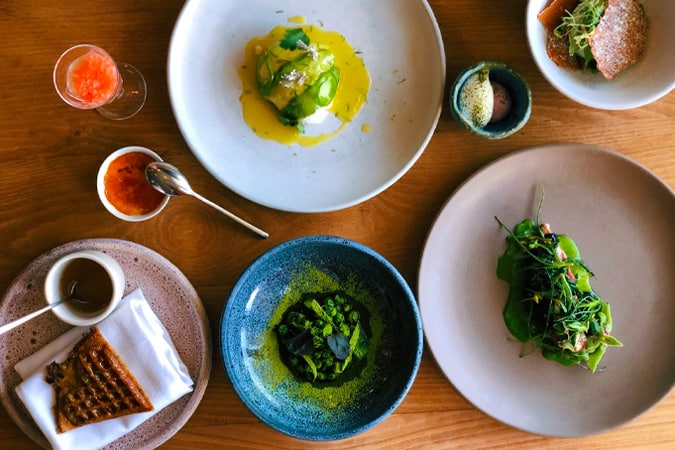 In London, Redemption Bar is arguably the most popular example of an alcohol-free bar that has a life outside of Dry January, detoxifying your body with all-vegan food and mocktails. Would You Go ‘Targaryen Blond’?

Adam Driver on Stepping Outside of the Box