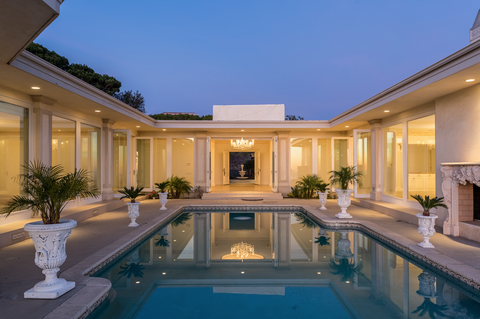 “High fashion doesn’t really exist here since most of the major photographers and models are in New York,” said Albright Fashion Library founder, Irene Albright of the red carpet-centered fashion scene in LA. That was part of her inspiration to bring her namesake showroom to the West Coast.

Filled with thousands of designer dresses, shoes, and accessories available to rent, Albright Fashion Library is an essential stop for stylists, celebrities and the fashion savvy public looking for unique pieces for photo shoots, award shows or movie set wardrobes. Albright opened her New York showroom in 1990 and is now bringing the same fashion sensibility to Los Angeles with her daughter Marina. “There isn’t a spot other than downtown LA that’s created this kind of space,” Albright said.

With a new space in Beverly Hills overlooking the city and ocean, it’s all about creating an experience. “What I’m doing is creating event spaces so it’s not just clothing. It’s an all-in-one package,” Albright said. “It’s art and fashion. It’s music and fashion. It’s film and fashion.” Albright plans to cultivate the LA fashion scene with collaboration and events. “I think LA is missing that center. New York has it by virtue of the fact that you walk out on the street and you’re bumping into friends. LA doesn’t really have that and that’s what I’m trying to create here.”

Since its beginning nearly 30 years ago, stylists, editors and designers have taken advantage of the extensive, yet finely edited, collection. “I know that every editor that has come my way in NY says that if it wasn’t for that for Albright they couldn’t do their job. It’s crazy right?” Albright said. With some 39,000 items for celebrities and the public to rent, the library is well-known for dressing for some of Hollywood’s star players, including Jane Fonda, Hailey Baldwin, Noah Cyrus, Sofia Richie, Cardi B, Kate Hudson, Morgan Stewart, Kristen Cavallari, and Halsey.

The library came about after Irene Albright, who worked for years as stylist and consultant to prominent magazines and photographers, found her creative imagination needing more. She decided to invest in items with an edge. “I would lend things to my friends who needed it,” Albright shared, “and before I knew it, they convinced me to charge money to borrow, and I realized they had convinced me to run a business.”

When asked about some of her favorite pieces, Albright revealed, “I’ve bought the entire Saint Laurent collection. Alexandre Vauthier and Gucci pieces that I covet because they’re masterpieces of art and fashion. The McQueen dress that was worn in Devil Wears Prada… these pieces are just magic.” While stores are driven to buy pieces that sell, Albright is interested in something else. “I’m lucky enough to be able to shop with my daughter, go to Paris four times a year,” Albright said. “I buy just like the department stores do except that I’m coming from a different eye… I’m looking for the more avant-garde things… The one shot deal.”

Albright often has looks for the upcoming season in stock even before department stores do, as well as archives of classic pieces from Chanel to Dior to Gucci. “I know every single item in the showroom even though everything is barcoded,” she says. Daily rental prices range from $500- $1,000.

“A lot of people showcase who they are with their clothing, with the way they dress, the way they style themselves. It’s one way of showing your individuality,” Albright insisted when asked about the importance of offering access to new fashion. “Sadly if that’s gone we’ll all be wearing black dresses.” She doesn’t just want to give people clothing to wear. It’s all about making standout, original choices. “I like artists to be magicians, for fashion to be magic, to make the moment be magic. I like when somebody feels really, really good when they walk through a room.”

7 Of The Best American Watch Brands

Should I Let My Boyfriend Be a Poll Worker on Election Day?