It is the standout look from Paris fashion week so far. A willowy brunette stands under the red awning of one of the city’s famous pavement cafes, a coffee and a basket of buttery croissants at her side. Her clothes are in chic shades of grey, her sunglasses are Wintour-sized, her hand-on-hip hauteur is pure Richard Avedon. But Balenciaga’s vision of Parisian chic this season has a couple of crucial updates. She is wearing tracksuit bottoms under her elegantly oversized coat, and her sweater features a built-in mask so that it rises to the bridge of her nose, under her shades, and is embellished at each cheekbone with a cascade of diamante, like chandelier earrings.

The absence of anything to dress up for – and the mandatory wearing of face masks where a pout painted in Chanel Rouge Allure should have been – had most of the global fashion industry on the back foot for months. But that was before Paris fashion week, where dressing up does not stop for no pandemic. In a city where a return to lockdown is looming, designers realise that if the industry is to survive, they may not have the luxury of sitting another season out. Fashion needs to opt in to reality if it is to stay relevant. Even with few proper catwalk shows, Balenciaga, Rick Owens, Marine Serre and Paco Rabanne all engaged with the idea of how clothes may bring a bit of joy, beauty or just newness into our current groundhog day existence. This isn’t about pretending everything is fabulous. It’s about bringing a little zhoosh to a suboptimal season.

Rick Owens held a Paris fashion week show – actually it was in Venice for logistical reasons – but livestreamed during Owens’ slot on the Paris schedule. Every look featured a mask. The masks came in black or sugar pink and were double-layered. There was one opaque, tight-fitting layer under a veil of chiffon that fluttered gracefully at the collarbone, like one of Grace Kelly’s Hermès silk scarves. There were hot pants and thigh-high boots, sheer knits and fitted leather jackets. Party clothes, in other words. 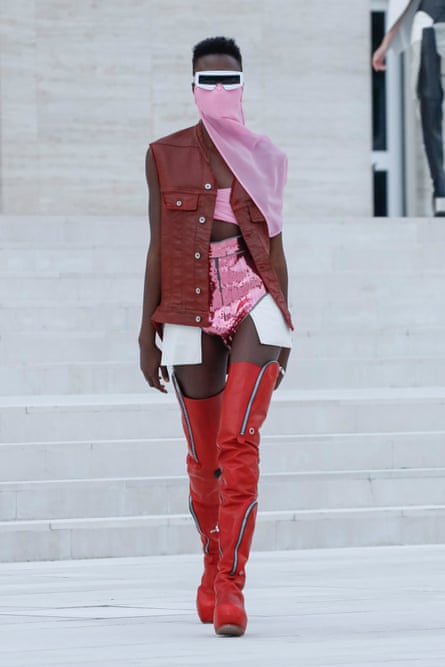 Marine Serre’s mesmerising sci-fi short featured clear plastic visors, worn with cinch-waisted tailoring. At Paco Rabanne, the designer Julien Dossena’s last three looks featured chainmail balaclavas – take your pick from gold, silver or black. It’s not a practical face covering, or even a reliably safe one, but as a reference to Paco Rabanne’s 1966 debut collection entitled Twelve Dresses in Unwearable Materials – a statement about how fashion has a record of seducing the public into liking a litany of looks that seemed ugly at first, from flared jeans to shoulder pads.

This month of fashion shows has struggled to find a party line on mask-wearing – a mirror, as ever, to the mixed feelings of the world. I know that I personally felt very self-conscious about mask-wearing when it came into our lives a few months ago, and therefore stuck to the plainest ones I can find. I was resistant at first to the pretty, floral kind, because something jarred about making a mask look jolly, but by the time fashion month had rolled round I had come to feel that a cheery mask gives a nice vibe. It says that mask-wearing isn’t something to be disgruntled about.

Keen to semaphore their responsible credentials, many designers made branded masks to give out at socially distanced fashion week appointments – but when I travelled to Milan, I was struck by the fact that street style photographers constantly asked their subjects to remove their masks for their portraits. In Milan, where a second wave has not yet materialised, there were two contrasting wardrobes. It was masks and subdued clothes for the audience, who are living in autumn 2020; sundresses and strappy sandals – and not a mask in sight – for the models, who represent summer 2021. 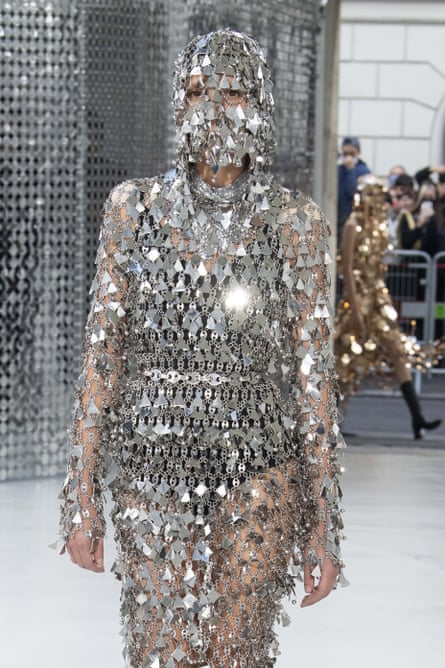 But, if Milan was a fingers-crossed, sun-drenched vision of next summer, Paris is about the here and now. A mood of gritty, tough glamour pervades. On the day his debut collection for Givenchy was revealed, the young American designer hired for the job, Matthew Williams, invited editors for a Zoom preview in the Avenue Montaigne atelier.

“Let’s start in the hardware area,” was Williams’ opening line – not a phrase that Hubert de Givenchy ever spoke, I suspect – before beginning our tour with closeups of the chains, belt buckles, earrings and rings that he has styled in a new padlock motif which is a homage to the “love locks” tradition on the city’s bridges. Beyoncé and Alexander McQueen were name-checked as Williams’ references for a collection that had a sleek, nocturnal energy. Asked if he aimed for elegance, he demurred and said his chosen adjective for Givenchy would be inclusivity. “It needs to be real, and it needs to be for now,” he said, squinting into his laptop with the Eiffel Tower framed in the window behind him. And we all know what now looks like. Anyone for a masked ball?

How To Determine Your Face Shape In 5 Easy Steps