Next summer, things are going to get a bit touchy-feely, in the best possible way. For SS20, menswear trends are all softness and sensuality, a resounding clapback to the chest-out testosterone of all that sports- and streetwear from recent years. This is masculinity as a louche, tactile thing, all soft fabrics and sighs.

The shift was most visible in tailoring trends, which flooded every runway with colour, pattern and textiles that begged to be touched. These were not suits for work. They were the embodiment of play, as though finally freed from the nine-to-five by jeans-friendly offices and ready to embrace all the brightness they’d been forbidden for the past century.

This sense of fun – of dressing for yourself and having a damn good time doing it – was the thread that connected a season of joyful but disparate design. In a dark world, it was as though menswear turned toward the light and realised that the future is malleable, there to be shaped, not merely survived. Its world is defined not so much by rules as a shared set of ideas about how we get dressed. And, more importantly, why we get dressed.

These are our picks for next year’s summer trends, and how you can start wearing them right now.

With near every runway awash in suits for the first time in a decade, designers played with their every permutation for SS20. Fastenings proved especially ripe for experimentation – there were few brands that didn’t get the double-breasted memo, and each brought its own spin on how to do one up.

At Dior, Kim Jones showed another spin on his wraparound jackets, again with an inbuilt sash, although this time they were worn open as often as closed. Dries van Noten also embraced the straitjacket look, emphasising a narrow waist with beefed-up shoulders, and Sacai got experimental with straps that disappeared amid layers of fabric.

Italy’s tailoring powerhouses, however, went the other way. Zegna, Corneliani and Armani went big on one-and-a-half-breasted suits; jackets that wrap more than single-breasted, but only just, as if they were a couple of negronis in and couldn’t quite summon the energy.

While you wait for the funky stuff to arrive, you can at least mix things up with more straightforward double-breasted tailoring. Look for a loose suit that you can break up by wearing the jacket with jeans, or even smart joggers. If you’re tiring of tie-dye but still want to unleash your inner hippy, then know that there’s a slew of do-it-yourself-inspired prints coming to scratch that particular itch. As you’d expect from blockbuster artist and longtime Raf Simons collaborator Sterling Ruby, his debut collection was a masterful, paint-splattered thing, full of clothes you could either wear or hang in the White Cube.

At Versace and Martine Rose, bleach was the discolourant of choice, applied to denim above and below the belt, whereas fashion’s more refined houses took a more artisanal approach: Dior, Marni and Ermenegildo Zegna decorated shirts and suits with colours that bled through each other like watercolours left out in the rain.

If you can’t quite stump up for Sterling Ruby’s art-slash-clothes, DIY your own wardrobe. You can enliven old band tees or your knackered jeans either by spraying them with bleach or by tying them up with rubber bands then bathing in a solution of bleach and water. 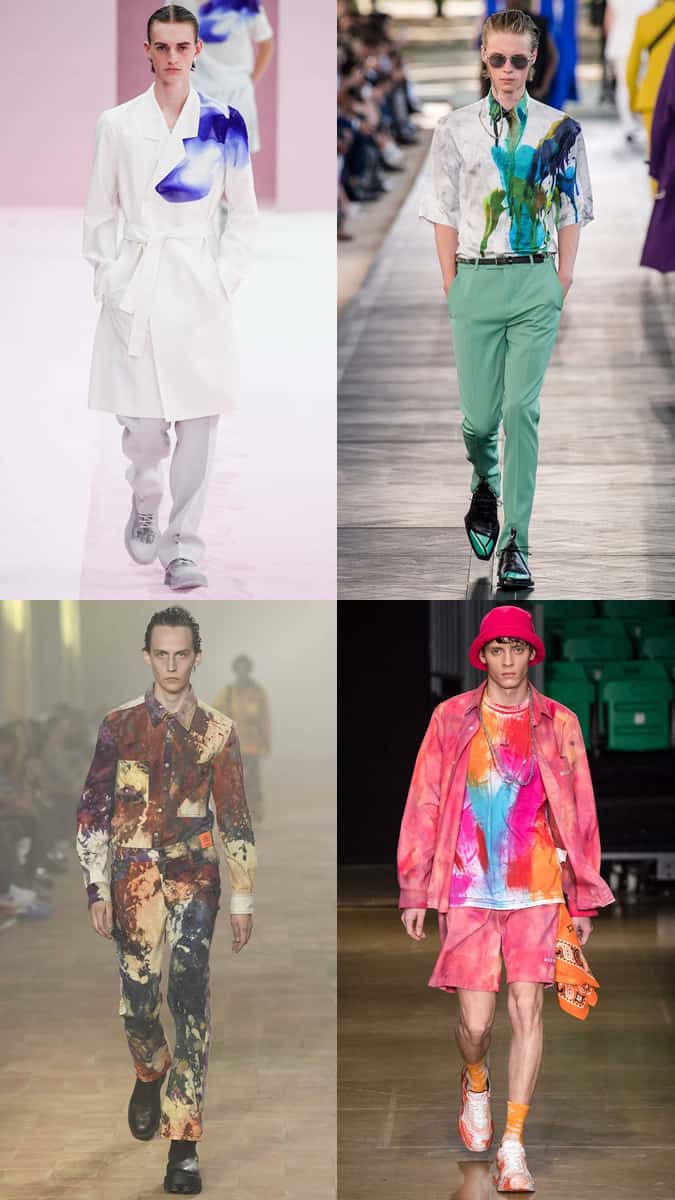 Flowery colours for fashion’s floweriest season isn’t news. But it is when they’re applied this liberally. Jacquemus and Louis Vuitton leaned furthest in, the former’s show taking place in a literal field of lavender (through which his models paraded in mint greens and lemon yellow), the latter surrounding his runway with blooms that also adorned his signature chest-rigs and holdalls.

This was pastels not as an accent, but to be worn head-to-toe, either in Refreshers-like variety, à la E Tautz, or in the dreamy monochromes of Givenchy’s shimmering suits and Ralph Lauren’s rainbow-shaded evening wear.

Embrace the rainbow and, instead of one key piece, try a few. A pale pink denim jacket over a lavender shirt, with mint green trainers, is the washed-out way to embrace head-to-toe colour. The dearth of guitar bands in the charts meant that designers had to track back to find a dose of real rock ‘n’ roll, and they plumped for the “turn on, tune in, drop out” vibe of the late ’60s and early ’70s.

Valentino took the era literally, adorning silk shirts with psychedelic landscapes by Yes collaborator Roger Dean. At Celine, Hedi Slimane proved his rock star obsession has more than one note, with glittery suits in Tommy Nutter proportions and high-waisted, bootcut jeans made for Mick Jagger in his snake-hipped pomp.

But it was Dries van Noten that won the look, with a collection that slipped from silk jackets to leather shorts, and offered glimpses of what happens once the gig’s over and the band’s sloped backstage.

We’re not ready for the return of bootcut jeans just yet, so the easiest way into this trend is through prints with a psychoactive bent. Think jackets in trippy pastels or acid-hued knitwear, either clashed (if you’re feeling brave) or anchored with simple neutrals. An ‘it’ bag has become almost as important to a label’s mens department as it is for their colleagues in womenswear. Louis Vuitton proved why it still makes most of its money from accessories, with models lugging everything from Toblerone-shaped holdalls to the bastard offspring of a backpack and a kite. Craig Green’s were, somehow, even less practical – metal tubes bent into bag-shaped outlines – but even more beautiful.

And the bumbag trend was as ubiquitous on the runways as in the seats surrounding them: Dior’s were versions of the house’s iconic saddlebag, Zegna showed versions that actually strapped around your waist (tres old-school) and Alyx proved that on Instagram, more is more, with pouches that could double as sleeping bags.

A flower-covered holdall isn’t the most practical thing on your commute. A crossbody bag is. This season, follow the Alyx and Berluti approach and size up to something that can actually fit all your stuff inside. Stick to neutrals (they go with everything) and earn bonus points for premium fabrics. You’re going to want to wear yours over a suit, after all. Leopard print has been unavoidable for a few seasons now, but for SS20, the rest of the jungle turned up, too. As if to prove that animal prints are basically a neutral, Dries van Noten paired his leopard print-lined jackets with silky floral trousers, which felt as thrilling – and dangerous – as spying a big cat peering out from the petunias.

At MSGM, head-to-toe spots were dip-dyed, creating an ombre effect that softened their aggression, whereas Celine took its big game in a typically rock ‘n’ roll direction, with leopard print and snakeskin jackets over shirt unbuttoned to the navel and high-waisted trousers.

Now that you’ve invested in an off-duty suit, something in an animal print is the perfect thing to slip underneath it. Even if you haven’t, a leopard print camp collar shirt (yes, they’re still trending) will make your fallback navy two-piece come over all Alex Turner. Everything You Need To Know About Raw Denim