You’ve likely been going to bed with linen for years, its strength and practicality matched by a low thread count that makes it one of the most breathable fabrics around.

It’s precisely these qualities that have also made it the quintessential summer cloth in menswear, as soft as cotton but with the ability to keep you even cooler underneath.

However, as every intentionally wrinkled Pitti Peacock knows, linen loves to crease — often making it look straight out of the dirty washing pile, even when it’s fresh out of the wardrobe.

So before opting for the fabric head-to-toe, here’s how to become acquainted with easy, breezy linen shirts to keep your sartorial bar rising in line with the mercury.

Why You Need A Linen Shirt

The cotton polo shirt has dominated casual summer dressing for decades, and you only need to look as far as Elvis Presley to see why. But the smarter linen shirt, a perfect blend of debonair and dishevelled, certainly has the chops to compete.

The fabric, a product of the flax plant, is used on a number of cuts from the traditional long-sleeved to the now staple Cuban collar.

To minimise creasing, linen is often blended with cotton — ideal for summer wedding suits that won’t leave your style in a crumpled heap. However, if you want to take full advantage of its cooling properties, it’s best to look for 100 per cent linen.

Also, the sustainably minded of you out there should note that blends are almost impossible to recycle. “For the ultimate ‘fit, I would layer a linen shirt over a cotton T-shirt, a pair of relaxed pleated trousers and some 70’s Chuck Taylor Converse,” he adds.

The Best Brands For Linen Shirts

No Friday night out is complete without a stop at Reiss to nab a shirt to accompany you for the evening. The premium high street store’s classic linen shirts in particular are a dab hand at elevating any man who slips into one.

If we were to put a finger on it, we’d say it comes down to the lightweight construction, flattering fits and subtle details such as a cutaway collar or contrast fastenings. The Uniqlo ethos of taking everyday pieces and crafting them out of the best fabrics around plays well into its range of linen shirts.

A broad range of colours is available, but be wary of the slightly relaxed cuts as is the popular style in the brand’s homeland of Japan. To temper the wide silhouette, bring shape to your outfit down below with a slim (but not skinny) pair of trousers. Therefore, expect linen shirts here to be reinvented for these modern times with details like handy breast pockets and nubby fabric textures. With over 80 years of bossing the formalwear game, luxury Italian fashion house Canali has an insider reputation for being one of the best tailoring brands around

The family-run business recently entered more casual territory, taking that same eye for impeccable cut and fit into pieces like the linen shirt, which is still kept as reassuringly classic as its slick three-piece suits. 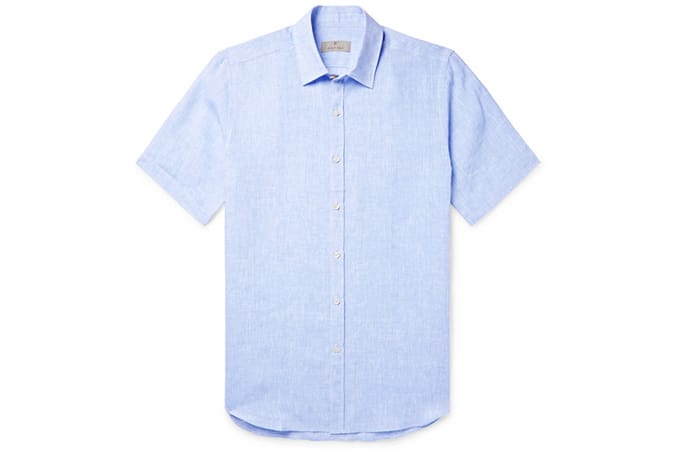 Another brand from the premium end of the high street, Jaeger excels at bringing simple, versatile options to the table and at an ever-so-slightly less expensive price point than its designer counterparts.

Despite first specialising in woollen underwear worn by the likes of explorer Ernest Shackleton, the British heritage brand does a fine line of summer-ready linen shirts that will be the envy of every other guy around the hotel pool. One of the pillars of Savile Row tailoring for over a century, Anderson & Sheppard is where you go when only the finest cut and cloth will do.

English made, and all with an attention to detail that only a hundred years of perfecting can produce, the Anderson & Sheppard range of linen shirts doesn’t stray far from classic, but brings a whole host of hazy pastel colours to the party instead. For proof that linen shirts aren’t just for the sun-drenched Riviera you only need to look as far as J Crew, which cuts most of its styles out of impeccably soft linen woven in Ireland — one of the leaders in the manufacturing of the fabric.

The massive American retailer brings a welcome dash of pattern to the game with a number of short-sleeve and long-sleeve options in all sorts of floral and anthropological prints, with plainer options also available. Having started out crafting tailored swim shorts inspired by the streets of Rio De Janeiro, curiously British brand Frescobol Carioca has since used its expertise to fill out the rest of men’s sun-seeking suitcase.

Its linen shirts take pride of place in this expansion, made from linen by luxury Italian textile house Albini (which also provides fabrics for the likes of Prada and Dior). Better yet, the smart, slim cut means they’ll work equally well in the evening as they do on the beach. If menswear brand Far Afield isn’t already on your radar, we suggest cracking out the homing device and getting yourself acquainted pronto. The Brighton-based label makes carefree clothes that fit its seaside location, and all at a price point you really can’t beat for this level of quality.

Easy and breezy linen is a favoured fabric, with the material being used on a range of different shirt types from the long-sleeved to our summer favourite, the Cuban collar. 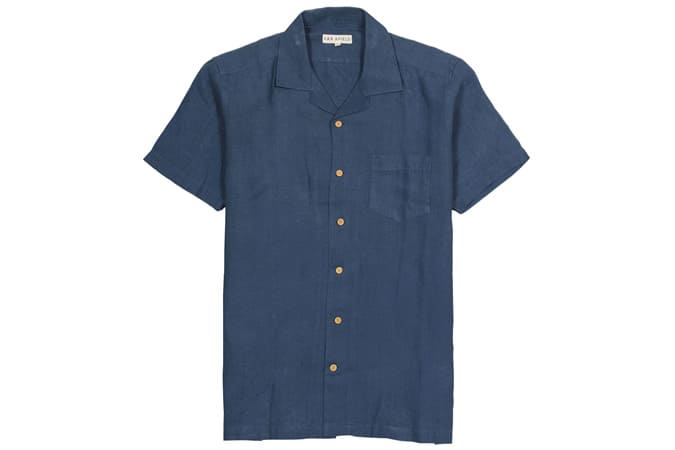 A flattering cut, classic button-down collar and of course the icing on top, that recognisable polo player on the chest, can only mean one name: Ralph Lauren.

The preppy American brand’s linen shirts take on pretty much the same styling as its iconic cotton Oxford shirts, with a snug fit around the chest, and a boxy pleat down below that has seen it become the go-to shirting choice for gym bros. How To Get Rid Of Acne Scars Once And For All