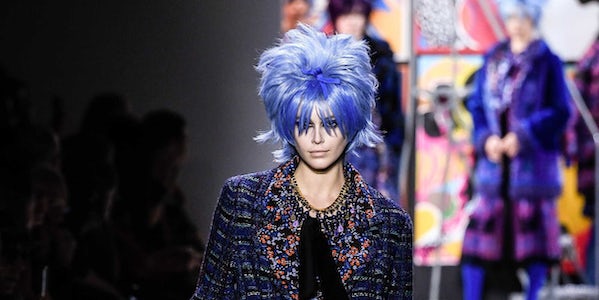 NEW YORK, United States — A journey to the centre of Anna Sui’s mind can be exhausting, so signposted is it with an extravagant, overwhelming array of visual/historical references. But then comes that catwalk moment where Sui’s clothes, Garren’s hair, Pat McGrath’s makeup, Frederic Sanchez’s music, the whole glorious mindset fuses in joyous harmony, and all is right with the world.

In Sui’s show on Monday night, that moment was soundtracked by the Velvelettes’ “Needle in a Haystack,” a lesser-known Motown hit. This year marks the 60th anniversary of the Detroit hit factory. It was the sound Sui grew up with and, as she put together her new collection, she realized that the look of early 60s Motown stars like Diana Ross and Martha of the Vandellas was insinuating itself onto her mood board.

Equally, she was influenced by the 60’s posters she’s been hanging in her newly renovated apartment. “I collect posters like people collect art,” Sui explained. Her mood boards — and the backdrop of her show — collaged intensely coloured souvenirs of the Fillmore in San Francisco, the Grande in Detroit, Richard Avedon’s solarized Beatles, David Weidman’s Fractured Fairytales and Mary Blair’s Disney storyboards into a gorgeous delirium which matched the vibrantly toned mash-up of prints and textures on the catwalk.

Sui tirelessly mines the pop-est pop of the past for inspiration. This collection was even titled Poptimistic. But it was rooted in the early 60s, so there was none of the Bohemian, haute hippie vibe that is Sui’s default position. Instead, the mood was Discotheque. Not disco. DISCOTHEQUE. Like the Ad Lib in London, or Arthur in New York. Sui offered party dresses galore for young swingers, and electrically shaded fake furs to drape them with.

Maybe young ladies in those slightly pre-heady times aspired to a Chanel suit. Sui’s version was suitably tweedy but trimmed in scallops of hot pink rickrack. Still in a Coco vein, she showed cardigans with almost everything. The standout was one in a checkerboard of black and white sequins, with matching skirt. The sequins were computerized. “I’m fully embracing technology”, said Sui exuberantly. Her enthusiasm was most obvious in a jacket print, say, which was computerized into a matching jacquard from which the rest of the outfit would be cut.

The models wore eyepopping Warholian wighats on their heads (except for the couple wearing squishy animal-printed hats to go with their coats). The hairpieces amplified a surreal granny-ish effect: the suits, the skirt lengths, the hostess gowns and cocktail dresses. It’s a borderline Sui often walks, where her research threatens to tip her hyper-detailed designs into almost academic self- indulgence. The fact that it never happens is a testament to her lightness of touch, and her instinct for the exquisitely timeless. Here, a vivid floral pouf dress, strapless, worn with sparkly tights and Mary Janes, was a look to race the pulse of any party girl, past, present or future.

The 10 Pieces We Keep Seeing Everywhere in London This Month