It’s been a few years since beards became A Thing again, when men towed a fine line between groomed and grizzly with big lumbersexual facial hair that birds could nest in. The trend may have been trimmed, but those cries of Peak Beard were dead wrong. Beards didn’t go away, they just became normal (and a little shorter).

In this modern world of normalised beard appreciation, simply growing out your stubble isn’t enough – you need a style, plus a beard trimmer and definitely a beard oil to see the best results.

The unsung hero of the beard game, beard oil is a must for anyone serious about their facial fuzz or their appearance in general. Whatever beard style you wear, it’s one of the first things people will notice about you and using beard oil ensures it’s soft, neat and just shiny enough.

What Is Beard Oil?

Usually blended from the likes of argan, grapeseed, tea tree, and jojoba oils – which include plenty of hair-friendly nutrients – beard oil is designed to condition and moisturise both your beard hair and skin. It’s often scented – earthy masculine notes such as cedarwood or sweet citrusy tones, depending on your preference – though unscented beard oils are available. What Does Beard Oil Do?

First and foremost, it’s about conditioning and moisturising. “Beards have cuticles that open like pores,” says Pall Mall Barbers general manager Dan Davis. “Oil penetrates the hair to condition from the inside out.” Beard oil will also stop your skin from flaking – the dreaded beard-druff – as well as softening coarse hairs and preventing itching. Whatever your beard length, you’ll want to tame unruly hairs; the best beard oils do that too.

How To Use Beard Oil

Beard oil is best applied right after washing your face or showering, when the hairs are softer and your pores have opened from the heat. This allows the oil to better penetrate your follicles and pores – and all the better if you’ve just shampooed and conditioned.

Though different brands may offer varying instructions, the most basic guide looks something like this: pat your beard dry and add just a few drops of oil into your hands. Massage into the cheeks and sideburn areas, then rub into moustache, chin and, neck in a downward motion. Ensure it reaches your skin and use less than you think you need because it’s all too easy to make it greasy. You can always add an extra drop if necessary

Whatever type of beard you have, it’s best to begin using an oil once it’s is long enough to become unruly. Look for oils that aren’t too greasy – so your hands don’t feel oiled all day – which can be a problem with cheaper oils.

Whereas beard oils are made from, erm, oils, beard balm is a thicker paste-like product made from ingredients such as beeswax and shea butter. Oil is good for putting an instant shine on your beard, but a balm will sit on the hairs for longer before absorbing, so it will condition more thoroughly. Beard balm also gives you extra hold, making it a styling product as much as a conditioner.

Overall, balms are better for longer, coarser beards. Most experienced bearded fellows would begin with an oil for a short beard style then advance to balm as the beard grows out.

Chemical nasties that aren’t kind to the face have no business in a beard, either. Keep things all-natural with Bulldog’s wholesome option: a simple concoction of aloe vera, green tea and camelina, as well as other essential oils. No fuss, and no ‘tache rash either. 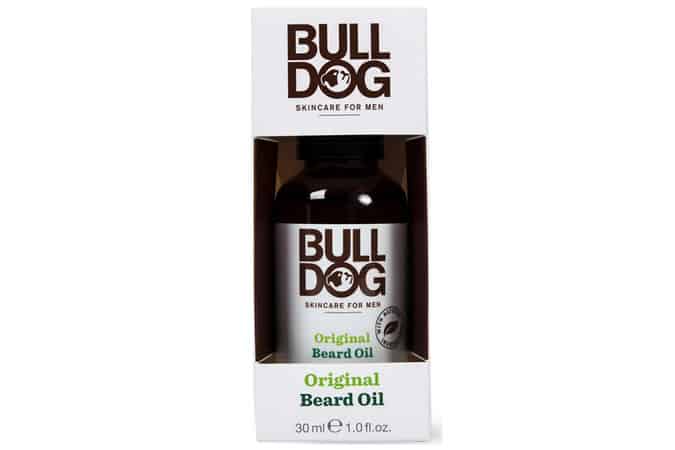 Make like Jay-Z and rock some Tom Ford. The American designer’s runway skills translate well to his namesake grooming range, with a blend of almond, grapeseed and vitamin E guaranteed to get any beard on the A-list. The seven-year itch has nothing on a beard with a fortnight’s growth. Luckily, British brand Neville has devised a potion to soothe the scratch. The mixture of organic argan oil and cottonseed is designed to quench Saharan stubble of the driest kind, while simultaneously providing an oasis to the skin underneath. With over 166 years in the business, Kiehl’s is well-versed in the art of grooming – experience that bodes well for your beard. Expect manly woody scents and an all-new formula to smooth even the coarsest of crumb catchers. Old really is gold. Not to be confused with the joker of Tenacious D fame, Jack Black’s beard oil is no less a big hit. The American brand uses patented PureScience technology: a combination of organic products and anti-inflammatories to prevent any chin snowflakes. While ingredients in some oils sound like pure marketing spiel, others do have a practical purpose. Take Pall Mall Barbers’, for example: the notes of sandalwood are a proven fixative – an element that enhances the longevity of other scents – to keep your beard smelling box-fresh. For some extra ammo in your grooming arsenal, opt for Anthony’s pre-shave beard oil. This double-edged sword cuts a dual purpose: one as a facial hair hydrator, the other as a regular pre-shave stubble softener, should you wish to shave or trim your beard. A healthy beard should be more Captain Hook than Hagrid – something that makes The Bluebeards Revenge Beard Oil quite the Jolly Roger. Containing a combination of masculine-smelling oils, the Devonshire brand’s range is specially designed to tame unruly, unabashed beards. Land ahoy indeed. Shop This Dress From Beyoncé’s Black Is King Visual Album