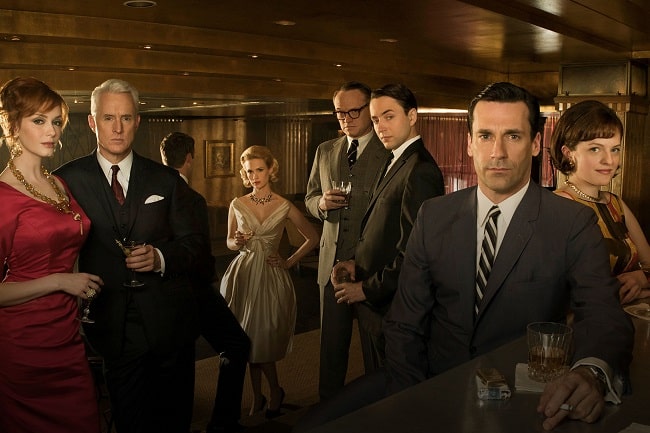 At the moment, Bridgerton is the Netflix series to watch, partially because everyone loves a solid period drama and partially for the fashion. However, in terms of menswear inspiration, film has vastly surpassed television for decades, partially due to budgetary constraints – the cheapness of American TV, for instance, could be spotted into the 2000s – and also for the fact that style, aside from the classics, has had a relatively effeminate reputation up until the past couple of decades. Combine these factors together, and what you get are some relatively drab menswear offerings up until the past 20 years or so. Especially with the cable drama providing a better-budgeted and stronger-dialogued alternative to broadcast offerings starting somewhere in the late 1990s – and streaming assuming this role in the 2010s – we’re starting to see more attention paid to what the male characters on screen are wearing. We’ve compiled some of the strongest shows where men’s style is a definitive element:

The cable TV drama about the workings of a Madison Avenue ad agency during the 1960s didn’t just provide a nostalgic window into a bygone era’s workplace and social dynamics. Rather, more than any one menswear designer, the show’s suit silhouettes shifted how men dress in the 21st century. Although the modern iteration of the skinny suit is frequently attributed to Thom Browne and Dior Homme, Mad Men’s characters like Don Draper and, to a lesser extent, Pete Campbell and Roger Sterling broadened its appeal and, frankly, made it less of a runway oddity. Instead, with John Hamm’s character serving as a paradoxical icon – he dresses well in the uniform of the day while experiencing imposter syndrome and repeatedly cheating on his wife – viewers could see themselves in an all-over slimmer cut, complete with skinny lapels and a similarly narrow tie. While Mad Men didn’t overhaul office wardrobes – nearly 14 years after its debut, many of us still wear chinos and a button-down to work – it firmly shut the door on the voluminous, pleated fit that dominated men’s suiting for much of the ‘80s and ’90s.

Inside The World’s Coolest Designer Homes